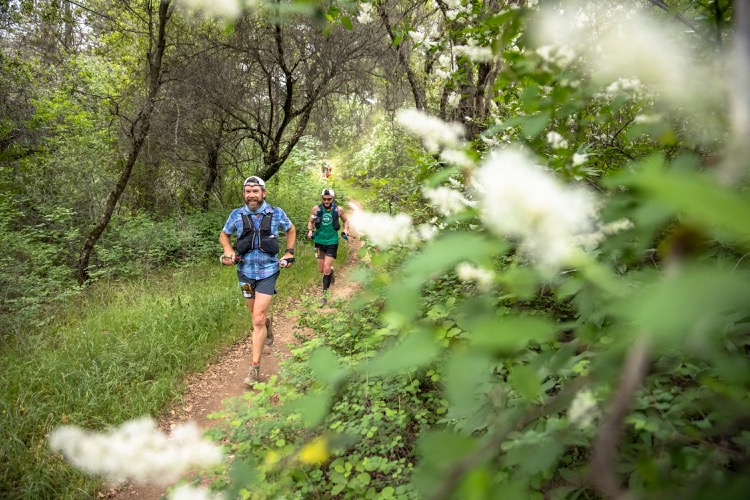 What’s Up in Ultra This Weekend – April 23

With the Western States Endurance Run just over eight weeks out, we have our final Golden Ticket race and six spots on the line at the 2022 Canyons Endurance Runs 100k this Saturday, April 23, starting at 5 a.m. in Auburn, California. There is also an accompanying 50k race this year.

Just as we did for the previous Golden Ticket races (Javelina Jundred, Bandera 100k, and Black Canyon 100k) we connected with a handful of the key players that we expect to be contenders at the front of the pack in both the women’s and men’s fields.

Leading off with the ladies, we have to start with Ladia Albertson-Junkans of Snoqualmie, Washington, who won the Chuckanut 50k four weeks ago in the fourth-fastest time in the course’s history:

“My running is even more unstructured than it used to be now that I have a kiddo, but my whole thing postpartum has been to honor my body and heart as it is in the moment. Mostly, that just means I take running one day at a time and give myself lots of grace, so it’s hard to say I’ve really had a build-up in the conventional sense. That said, I’m thrilled by how consistent I’ve been able to be in my running over the past six months. I am most excited just to be on the same trails at the same time as so many women I admire—and feel the magic that happens when we push, pull and uplift each other from start to finish.”

Leah Yingling of Salt Lake City, Utah, was sixth at the 2021 Canyons 100k and has been on the podium in all eight out of her last eight ultras since then, including a near Golden Ticket miss at the Bandera 100k in January:

“I’m really excited to give this one another go. I finished two spots back from a Golden Ticket here last year and felt like I had run too conservatively in the first half. I’ve focused the last few months on doing shorter races (RUFA 6-hour, Transgrancanaria 62k and Gorge Waterfalls 50k) and putting myself in the mix more during those efforts. I ran Gorge exactly how I wanted to and have been focusing on recovery since. I’m feeling great physically, and just trying to tame my high level of excitement for toeing the line with the deep field of women. Race after race, we’re seeing women raise the bar higher in our sport, and I’m excited to see that trajectory continue next weekend.”

Nicole Bitter from Austin, Texas, is no stranger to delivering incredible performances on the biggest ultra stages, including winning the 2020 Javelina Jundred and finishing 7th at the 2019 Western States Endurance Run:

“Things have been a bit chaotic as my husband and I just moved to Austin. While a bit overwhelming, I have found so much happiness training back in Texas and feel fit and ready to toe the line at Canyons. There is nothing like running on the trails of the Western States course.”

Hailing from Cedar Hills, Utah, Alexis Crellin was fifth at last year’s Run the Rut 50k and fourth at the Speedgoat 50k in 2019. While she has yet to run a 100k, a couple of top five finishes at America’s two premier mountain ultras bodes well for her jump up to the longer distance:

“I’m so grateful that I made it through the training of a 100k, the furthest distance to date I will have ever run. I predominantly come from a mountain background and have spent a lot of time traversing and climbing, and am curious to see where my running abilities are. The training for Canyons consisted of cross training with backcountry touring, and I don’t think I ever did over a 60-mile week. My ankle will always hurt and I have all kinds of secondary issues, but no pain that so far isn’t manageable. I’m the full-time mom of three small kids and a very active spouse, so training is always far from perfect, but that’s just how it goes. I’m just happy that nothing has blown up. As far as Saturday goes, I’m just excited to be out there among so many female crushers. As long as I empty my tank and give it everything I have, I’ll be happy with my performance.”

Other women we expect to compete for the win and round out the top ten in no particular order include the 2021 #4 UltraRunner of the Year Britany Peterson of Pocatello, Idaho (who’s already in Western States), 2017 Western States Champion Cat Bradley of Boulder, Colorado, Abigail Levene of Boulder, Colorado, the fifth-place finisher at the 2021 Run Rabbit Run 100, 2019 Speedgoat and Lake Sonoma 50 Champion Anna Mae Flynn of Salida, Colorado, Sarah Biehl of Columbus, Ohio, who was second at the 2021 JFK 50, and Jazmine Lowther of Nelson, British Columbia, who was third place and just five minutes back of Albertson-Junkans at last month’s Chuckanut 50k.

The men’s field is equally as deep. Adam Peterman, the 2022 Chuckanut 50k Champion and 2021 #8 UltraRunner of the Year from Missoula, Montana, is primed to continue his hot streak:

“I’m feeling confident with how my training has been going into Canyons. I’ve run more miles per week before, but this block has had the biggest weeks I’ve ever strung together if you include running, cycling and skiing. I’m stoked to line up against a loaded field and see what happens when I go 100k.”

“I’m excited to line up for a Golden Ticket race again. Those Western States spots always give these races a little more energy and excitement than your typical trail race. I’ve had a shorter training cycle for this race but am starting to round into shape at the right time and am looking forward to mixing it up with a competitive field.”

Hailing from Nelson, British Columbia, the winner of the 2021 Run Rabbit Run 100 Dave Stevens, has low expectations for himself, but oftentimes that can lead to big results:

“Been a tough winter here for training and just trying to get over a virus, so I just did a ton of aerobic stuff in three weeks to hope that I can smash the last few hills. No expectations really, just want to go and enjoy it. I guess those are classic runner things to say?”

Look out for Caleb Olson of Draper, Utah, who was 17th at UTMB’s CCC last August and more recently won the McDowell Mountain Frenzy 50k in December:

“Training for this race has been different than any other I’ve trained for because of the amazing group of runners doing Canyons this year from the Salt Lake City area. We’ve been doing workouts and long runs together at least once a week and want to prove that in ultrarunning, we can perform better as a team than individuals. With such a deep field this year, I’m looking forward to seeing how the SLC group stacks up against some of the best in the nation. I’ve recently started getting into these more competitive races and it’s kind of fun coming in mostly unknown, it keeps the pressure off me. I’m feeling strong, healthy and ready to surprise some people.”

The list goes on and on, but don’t look past Ryan Miller, of San Antonio, Texas, the recent winner of the Gorge Waterfalls 50k as well as the Bandera 2021 Champion, the 2021 #9 UltraRunner of the Year David Sinclair of Truckee, California, lining up at his first 100k, Rod Farvard of Mammoth Lakes, California, who was fourth at January’s Bandera 100k, Bryan Kerl of Salt Lake City, Utah, the seventh place finisher from last year’s Canyons 100k, Sage Canaday of Salida, Colorado, fifth at the 2020 Tarawera 102k, and another Flagstaff, Arizona, resident Jared Hazen, holder of the second-fastest time ever at the Western States Endurance Run.

Who are your picks for the Golden Tickets at Canyons on Saturday? What about your new 100k National Champions at Mad City? Let us know by dropping a comment below.  As always, thanks for reading What’s Up In Ultra this week, and please keep us posted on what event you’re partaking in this weekend, too.

Rooting for Leah, this is her race to punch a ticket!