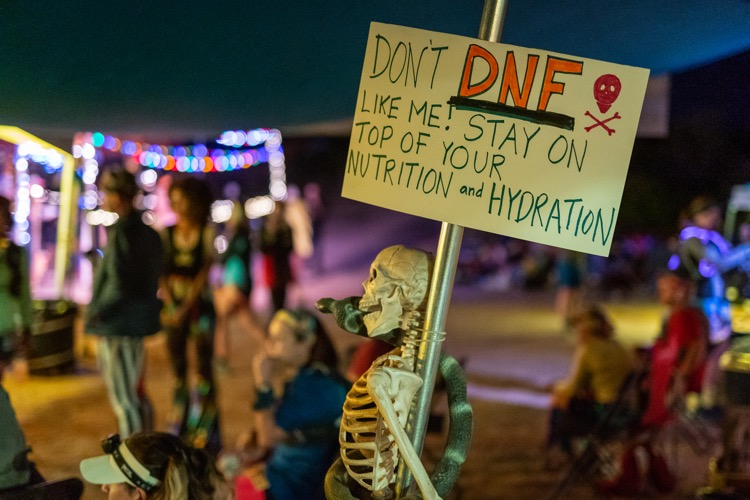 Leading the charge this Halloween weekend is the highly anticipated Javelina Jundred. The 100-mile distance has nearly 600 entrants and is a newly minted Western States Golden Ticket race. The 100K race boasts 300 entrants, helping to make this Aravaipa Racing event in Fountain Hills, Arizona, one of the largest event weekends of the entire year.

Both the women’s and men’s races are expected to be hotly contested and, as was the case for Aravaipa’s previous Golden Ticket race, the Black Canyon 100k, and the inaugural Cocodona 250 in May, Javelina Jundred will include livestream coverage.

In her first crack at the 100-mile distance, Austin, Texas up-and-comer Lotti Zeiler said she is coming off of a little head cold but has rebounded from the concussion she sustained in September at the Lake Sonoma 50, “I can’t wait to run for an entire day and maybe more,” she said with a slight chuckle on Tuesday morning. “It’s hard to wrap my head around the distance so I’m just going to show up, have fun and not put too many expectations on myself. It’s going to be crazy competitive. I’m stoked to be somewhere in the mix.” Zeiler boasts a win in each of her first four ultra finishes.

Also expected in the mix is Arizona’s own Tessa Chesser. Chesser says she’s, “Just mainly feeling good and ready to rage. I totally understand there will be discomforts and (am) excited to dig into that feeling again over the course of 100 miles.” This appears to be her second 100-miler after finishing third at Run Rabbit Run in 2019.

The other runners expected to be at the front of the women’s pack include ​​fourth-place finisher at Western States this year, Brittany Peterson, 2017 Leadville 100 champion Devon Yanko and the 100-mile world record holder, Camille Herron.

On the men’s side, winner of last month’s Run Rabbit Run, Dave Stevens, is entered but it remains to be seen how well he has recovered in a short five weeks. Known more for his long FKT efforts in recent years, Joe “Stringbean” McConaughy is on the start list, as well as the 2021 Zane Grey 100K winner and Arizonian Charlie Ware. Stepping up to the distance for the first time, fifth-place finisher in this year’s Canyons 100K, Cole Watson appears poised to make his mark. “Everything’s been done that I can think of to give me the best chance,” he said just a few days out from the battle in the desert.

Check out the Javelina Jundred Race Preview video for more details and the livestream on Aravaipa’s YouTube channel starting on Saturday, October 30 at 6 a.m. MST.

Other events on the UltraRunning Calendar this weekend include the Last Squatch Standing in West Orange, New Jersey, beginning at the rather pedestrian time of 9 a.m. on Saturday, Autumn Leaves 50k/50m in St. Paul, Oregon, Kal-Haven Trail Run, a 33.5 point-to-point race starting in Kalamazoo, Michigan, and the 21st annual Tussey mOUnTaiNBACK 50-miler in Boalsburg, Pennsylvania, on Sunday.

What’s Up in Ultra in your community this weekend that we should know about? Drop us a comment below, let us know what we missed, and what’s lighting your fall ultra fire this Halloween weekend. If you’re wearing a costume, please don’t forget that detail too. 🎃

The East Coast 24 Hour Track Event is running this weekend in the Upstate New York town of Fayetteville (near Syracuse). The field size is small but it looks like the race is eligible for records and is a US national 24-hour team qualifier.

That’ll be a good one Pete. Who’s your pick to come out on top? Thanks for the share.

So far there’s only 12 entrants, per Ultrasignup. Jared Burdick has an impressive running resume on a regional level and has done well at some national-caliber races. He may be going for a spot on the US 24-hour team.

For sure—Jared’s wife Lauren is in the race too? That’s exciting. Also interested to see how Fred Harle does, he’s had some good last person standing success recently.

Autumn Leaves 50/50, a long time fall 50k and 50 miler in Oregon on October 30th. A 6.25 mile loop course at historic Champoeg State Park. The course is 20% on trail and 80% paved bike path. Race is small this year due to the strict Covid restrictions in Oregon but the weather looks great. Zach Gingerich holds the 50 mile course record in a blazing 5:56 while Matt Longergan holds the men’s 50k record of 3:17 set back in 2008. Pam Smith holds 3 records at the event, the fastest woman’s time in the 50 miler at 6:11 and the 50k at 3:46. She also holds the most wins in the best Halloween costume! Ian Sharman and Pam will be back this year in the 50k.

We’ve got that one in there BWH! Can’t wait to see how it goes…great fall weather indeed.

Camille gets massive CR at Javelina! Gender-graded better than all men’s times at this event ever! Elegant response to those who doubt her trail prowess!