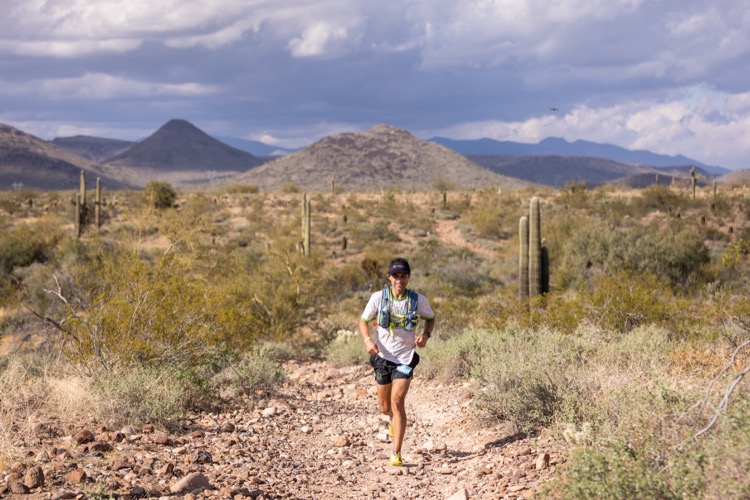 Our second Western States Golden Ticket race on the 2022 UltraRunning Calendar headlines our What’s Up In Ultra column this week. The Aravaipa Racing Black Canyon 100k is on Saturday, February 12, as well as an accompanying 60k on Sunday. The 100k live broadcast begins at 6:30am MST. Unsurprisingly, the field is ripe with talent, and due to the cancellation of Tarawera earlier this month, there are now six automatic entries into June’s Western States 100 up for grabs. We were able to catch up with a handful of the athletes expected at the front of both the women’s and men’s fields earlier in the week to get a take on how they’re feeling and what they’re most looking forward to about racing in the desert.

Ultrarunning legend and recent URM Podcast guest Pam Smith of Salem, Oregon, is toeing the line at her first trail race since June 2019, and is remaining pragmatic. “As much as I would love to be in the hunt for a Golden Ticket, I know that is probably not realistic. I want to run a smart race. Hopefully, I’ll get a good gauge on where my trail fitness is and what I need to keep working on going forward. More than anything I’m looking forward to spending the day on my feet (uninjured!) in a new place with lots of good people.”

Anne-Marie Madden of Vancouver, British Columbia, won the Squamish 50 last October and is thrilled about the opportunity to compete with a deep field. “I’m incredibly excited (and nervous) to race the Black Canyons 100k. It will be a great opportunity to see many friends from the trail running community that I haven’t seen since 2019. There is an incredibly deep field of women racing from seasoned veterans to new and upcoming talent (Katherine Short from Canada, for example). I expect everyone is going to bring their ‘A’ game with three Golden Tickets up for grabs.”

Devon Yanko of Salida, Colorado, didn’t line up at the Bandera 100k last month, but instead won the Arches Ultra 50k in Moab, Utah, two weeks ago as her tune-up. She succinctly said, “I am racing! Looking forward to some fast fun in the sun!”

At the 2021 Javelina Jundred, Lotti Brinks (Zeiler) of Austin, Texas, finished fourth just missing the second Golden Ticket to Tessa Chesser, and is likely primed to take a step onto the podium. “I’m super excited to be back in the Arizona desert after Javelina. I’ll try to carry the same amount of stoke through the 100k on Saturday. When I look at the start list, I feel like an absolute rookie, but that’s okay – my goal is to have fun, run my own race, and move up in the field throughout the race. There are three tickets up for grabs and one of them might be for me. You never know.”

Lauren Puretz of Colorado Springs, Colorado, finished fifth at the 2021 Bandera 100k and despite the common pre-race jitters, is ready to take her racing to the next level. “Definitely a mix of emotions and preparedness. I am really looking forward to some warm, snow-free time on the trails, but nervous about distance and competition. What an amazing, loaded field. Hope I can rise to the occasion!”

Corinne Shalvoy of Castle Rock, Colorado, won the San Tan Scramble 50k in course record time last month and was third at last year’s Black Canyon 60k. “I am just super excited to be running with an amazingly talented field of women. Ready to celebrate our combined strength in this sport and put everything I’ve got out there on the day.”

YiOu Wang of Kentfield, California, Addie Bracy the #10 2021 Ultarrunner of the Year from Denever, Colorado, Taylor Nowlin of Spokane, Washington, and Clare Gallagher of Boulder, Colorado, among quite a few others, are also on the start list and expected to compete for the win.

On the men’s side, the odds-on favorite has to be Anthony Costales of Salt Lake City, Utah, the #6 2021 Ultrarunner of the Year, and the 2021 Canyons 100k winner in course record time. He has, however, been dealing with a bit of a bug. “Training was all in the books, but I have been sick since Wednesday. Just need to get the body back to normal in the next few days. The body has been depleted for quite a few days now, unfortunately.”

One of the top up-and-comers in the sport who was sixth at the 2021 Canyons 100k is Preston Cates of Boulder, Colorado. The recent Nike Trail signee’s enthusiasm is infectious, “Yes sir, getting ready to rip! Ultra days are some of the best days you can get.”

Jared Hazen of Flagstaff, Arizona, knows the Black Canyon course better than any runner in the field and will look to take charge early on. “I’m feeling pretty good! I’m healthy and feeling fresh so don’t really have any excuses. I’m definitely not in the best shape of my life, but I think good enough.”

Elliot Cardin of Cowansville, Quebec, won a Golden Ticket at the 2020 edition of the race by finishing third, and is hopeful he can have another great day in the desert. “Feeling good now, I just came back from an injury, but my big training block is in the bank and I’m confident.”

Another Flagstaff, Arizona, local and NAU graduate, Joey DeFeo was third at the 2021 Lake Sonoma 50 in searing heat, preparing him well for the forecasted warmer winter temperatures. “I’ve put in the longest and one of the best training blocks of my life leading into Black Canyon, including a lot of those miles on the BCT itself, and I’m really excited to put myself out there and see what it feels like to race for a Golden Ticket this early in my ultra career. The field looks deep as well, so I’m pumped to battle some big names in the sport and really get my name out there.”

Makai Clemons, who used to live in Flagstaff, Arizona, but now resides in San Diego, California, won the Javelina Jundred 100k way back in 2017 as well as finished second at the Black Canyon 60k that same year. A quick look at his Strava training indicates he is as fit as ever. “I’m feeling strong headed into this weekend. Looking forward to racing on the trails again and competing against a really deep field.”

Recently profiled Brandon Miller of Calgary, Alberta, has been living and training in Arizona this winter to better adapt to the heat in his third attempt at this race. “Feeling even better this time around, training in Flag and on course for five weeks just might be what I needed. The field is so deep, but that just makes it more exciting.”

Logan Williams from Truckee, California, is also heading back to Black Canyon for redemption. “Last year I tore my Achilles on this course and that was a kickoff to a year filled with questions, reflection, health scares and so much more. I know that last year shaped me as an athlete and individual, both mentally and physically. Needless to say, I am excited to show myself and the world the extent of that growth.”

The 2021 Leadville 100 Champion Adrian Macdonald of Fort Collins, Colorado, is not one to be overlooked either. “My buildup has gone great as I was able to build off the fitness I had this summer leading into Leadville. I sprinkled in some speed and had fun racing a couple shorter races on the XC course and roads. I’m looking forward to the effortless opening miles on the dry desert trails and then challenging for the win or a Golden Ticket when things get tough after Black Canyon City.”

Additional athletes to keep your eye on are, but not limited to, Reid Coolsaet of Hamilton, Ontario, Justin Grunewald of Minneapolis, Minnesota, Jackson Brill of Boise, Idaho, Seth Ruhling of Longmont, Colorado, Bryan Kerl of Salt Lake City, Utah, and Colton Gale of Bend, Oregon.

Also on the calendar this weekend is the Grandmaster Ultras in Littlefield, Arizona, beginning on Friday, February 11, the Outlaw 100 in Wilburton, Oklahoma, and the Algonquin 50k in Pocomoke City, Maryland, on Saturday, February 12, as well as the Montara Mountain 50k in Pacifica, California, on Sunday, February 13.

Who are your picks for the Golden Ticket winners on Saturday? Drop them in the comments below and be sure to let us know What’s Up in Ultra in your state that we missed this week.

Whoever is most prepared for the heat coming out of the winner will find success…who’s been hitting the sauna?

I have seen some athletes log sauna time on Strava, but not many! Black Canyon City is showing a high of 78 on Saturday, so you’re probably right on the money.

You forgot about Dre.

How’d it play out this year, better weather today?

Cold to start, gorgeous at finish, a new course, numbers a bit down with the date change, a rare Sunday ultra, and the Super Bowl! But the wife reports great camaraderie, the most important thing!

Couldn’t possibly list every person, was shooting for about a dozen or so.

Just dropping Reid Coolsaet name like he isn’t a 2 time Olympic marathoner. Sure he’s only ran 2 ultras but damn.

There were 505 men in the race and he was one of about a dozen I listed, I just didn’t get a comment from him.