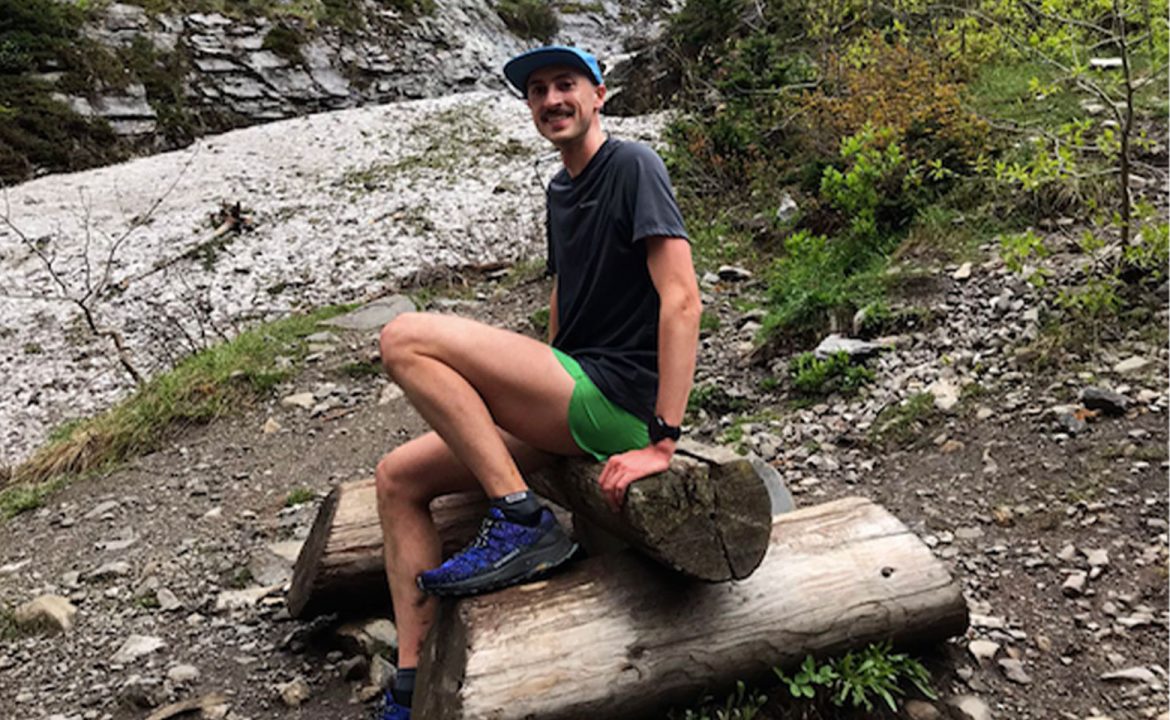 Miller exploring the Kananaskis region of the Canadian Rockies

After dedicating himself to an education in engineering and working nearly 80 hours a week as an information technology professional, Brandon Miller knew what it would take to achieve his dreams. In the energy infrastructure industry, he was operating on the ground in the harsh elements of northern Alberta, Canada. He originally thought his career was a dream come true but seemed on the brink of burnout way too early. Exhaustion, a decline in health and most importantly, unhappiness, had him soul-searching for change.

“One morning I realized that enough was enough,” Miller said in a recent interview from his home in Calgary, Alberta. “I was tired of being unfit and unhappy. I thought back to the earlier years of running and realized that I wanted to try and pick it up again. I bought a pair of running shoes and hit the paths. The effect was quicker than I would have imagined.”

He has fond childhood memories of running around his family’s cottage at Lake Huron, one of the five Great Lakes in North America, preparing for cross-country seasons in the fall and of course, celebrating Terry Fox Day each August, a civic day in many provinces of Canada held in commemoration of the late Canadian cancer activist and runner, Terry Fox.

His studies and pursuit of a mechanical engineering degree eventually took over, and running fell off the radar as Miller moved into his twenties. With his passion reignited by a need to regain some semblance of balance in 2015, he quickly fell in love with running again. “I was feeling better both physically and mentally. So, I started using running as an escape. No matter the day I was having, how stressful life was, I laced up the shoes. As soon as I was out the door, I was free. Nothing could stop me. It was my therapy, my time where I was alone with my thoughts. All my worries melted away. This is where running started to become part of my daily routine,” Miller said. 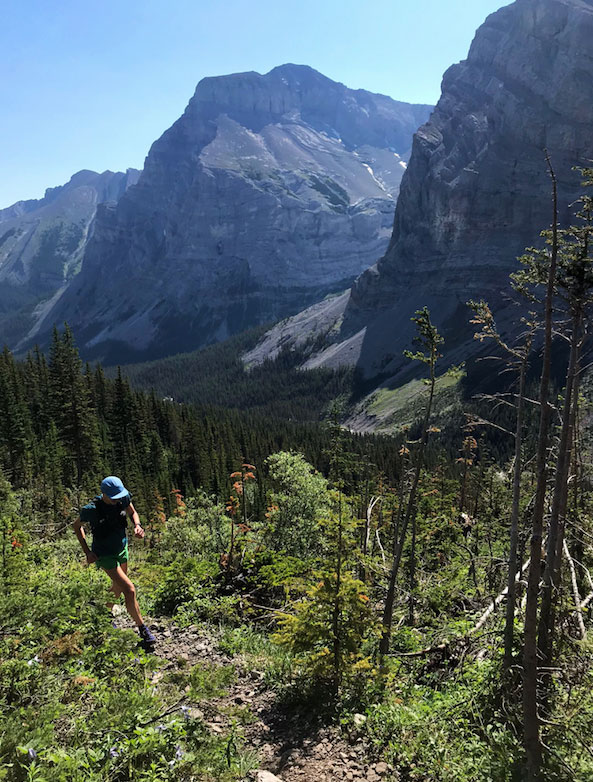 Just running wasn’t enough though, as he started to immerse himself in the competitive side of the sport. First, with some shorter road and trail races, and then into the ultra scene. “I started searching for races and discovered the strange and foreign sport of ultrarunning. I had no idea there were races longer than a marathon and that people were racing through the wilderness, up mountains and even across rivers, sometimes for multiple days on end. I thought it was crazy, but I was intrigued.”

Having never run a race longer than a half marathon, Miller took a giant leap by registering for his first ultramarathon, the 125k Canadian Death Race in Grande Cache, Alberta, in 2017. “I had no idea what to expect, and wasn’t sure if I was even going to be able to complete the distance.” He continued, “So I started preparing and I dove in head-first. I had just under a year to go from minimal training up to the 125k distance. I read and studied ultrarunning books, and created my own training plan. I met and started running with a couple of local ultrarunning veterans, picking their brains for all the knowledge they had. I spent countless weekends down on the course, running and making plans of how to best tackle the race. I ate, slept and breathed ultrarunning for that entire year, all while juggling my field engineering job.”

Despite it being his first ultramarathon, and tough one at that, Miller persevered on what he described as the “toughest thing I had ever done,” and won the race in just under 14.5 hours.

“I fought hard, riding the highs and grinding through the lows,” Miller reminisced. “At times I questioned what I was doing. I remember saying to myself, ‘There’s no way I’m quitting, but this will be my first and last ultra.’ Just reasoning with my brain in an effort to will myself forward. And it worked. I continued to push onward.”

Fast forward to 2021, and Miller is completely entrenched in the ultrarunning community in Calgary. He’s run nearly a dozen ultramarathons and found success not only with his results, but in enjoyment of the deeper relationship side of the sport. “Everyone is so accepting, so inclusive, so happy to be out on the trails and sharing the joy, positivity and love of it all with others. It doesn’t matter who you are. I’ve met so many wonderful people through the ultra/trail community, and their attitudes and outlook on life are contagious. It’s changed me as a person, and I try my best to share that same positivity and enthusiasm whenever I can.” 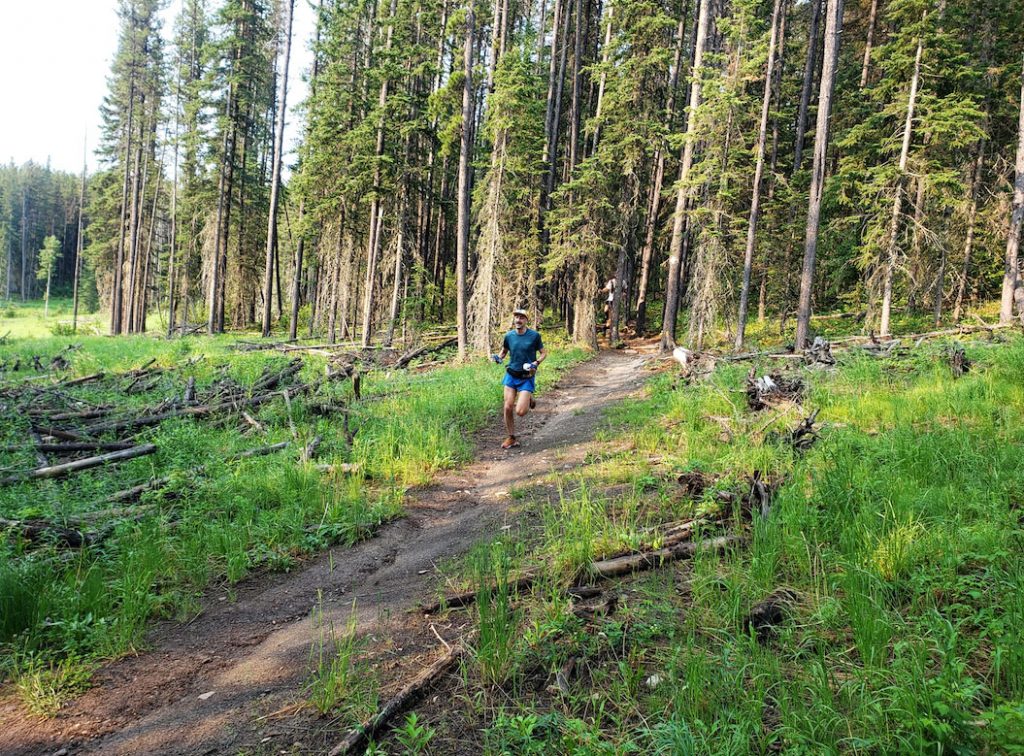 Miller exploring the Kananaskis region of the Canadian Rockies

He started catching the attention of a few brands in the industry, and when Merrell approached him about the potential of working together he was ecstatic, as their core values align nearly seamlessly: to share the simple power of spending time in the outdoors. “It was one of the reasons I was drawn to the trail running community in the first place. Everyone I’ve met is just so welcoming regardless of who you are. All that matters is that you’re outside, being active and having fun doing it. There shouldn’t be any limits or restrictions to the outdoors, and I try my best to promote that value just like Merrell.”

Miller believes Merrell already has a great understanding of what trail and ultrarunners are looking for based on their 40-year history in the outdoor industry. “They’re well established in the outdoor space and are using their expertise to continuously improve by engaging those already in the sport, and receiving important feedback for the next generation of product,” he said.

And their shoes clearly work. Most recently, Miller finished fourth at the Canadian 50k National Championships in Quebec and has plans to race another 100k event this fall. He’s been logging most of his training runs in the Moab Flight shoe and is excited to spend time in the new Agility Peak 4, “They’re supposed to be super comfortable with a thick midsole, combined with an aggressive tread and Vibram outsole for amazing grip.”

“While I always have enjoyed training, my perspective around racing has been changing and I’ve been loving the builds even more.” Like many things imperative to growth in this world, he realizes his running is always a work in progress and that’s the innate beauty of it. Most of it is unpredictable. “Being confident in your abilities and believing you can achieve your goals is huge. The mental aspect of ultrarunning is just as important as the physical. Going into a race having that self-belief and maintaining it even through the lows really goes a long way.”

Merrell’s Wild Miles campaign this summer resonates with Miller and his infectious outlook on the intersection of life and running. “For me, it’s all about encouraging people to get out beyond the pavement and onto the trails, into the wilderness. There might be hesitancy from some to take that first step outside their comfort zone, but everyone is welcome.” Miller is a prime example, having taken a long break from running and now finding it to be even more rewarding the second time around.

He’s most excited about the bright future for the sport of ultrarunning as it booms, his continued involvement on many levels, and Merrell’s role as a key player in the years to come. “I’ll be helping wherever I can by continuing to provide feedback, suggesting new products and working with Merrell to engage newcomers to the sport. There are so many opportunities.”