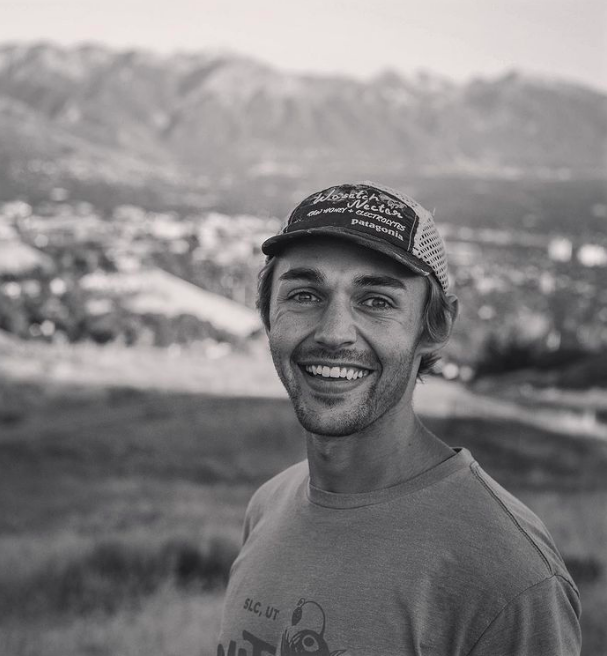 Diamond in the Rough: Logan Williams – Thriving with an Autoimmune Disease

In a city with over 25 million people, the last thing anyone would expect is to feel alone and isolated. “No one wanted to make eye contact or talk to me,” Logan Williams said about his time spent studying abroad in Shanghai, China, in 2015. “You assume that you’re going to be alone in nature, but it’s a much more powerful feeling in a city environment.”

Add in the lack of public open spaces and possibilities for exploration away from the city, and Williams found the experience more isolating than being surrounded by nature—something he typically enjoys.

As a soccer and rugby player during his first two years of college at the University of Denver, running wasn’t a new concept to Williams but rather a means to an end in ball sports. It was also a way to escape the isolation he was feeling halfway around the world.

He started to run 4-mile loops around Shanghai just to get outside his tiny apartment and clear his head. “I was going nuts sitting in my apartment. It was really hard to not have any open space with these massive concrete walls around me. I was getting claustrophobic and just wanted to move.” Despite the lack of nature, the paved streets still provided a catalyst.

And move he did, eventually coming back home to America and landing in Colorado to finish his degree, while simultaneously undertaking a huge fundraising project for Alzheimer’s research—a progressive disease that his grandfather succumbed to in 2018. He gave himself a year to complete all of the state’s 14ers (14,000-foot peaks) while raising money to support the Alzheimer’s Association.

With his time limited due to studying and fundraising, he was having to check off each of the 50-plus peaks rapidly throughout the summer. Williams found that the only way to do it was to combine some of the running skills he had picked up in China the year before, bagging multiple peaks through linked up longer mountain runs. “That was really the limitation. I had to move faster, but I found out that I loved it,” Williams recalled. “I was romping around, rolling through beautiful mountains on these pristine trails. I just realized that I felt free and at peace. There was nothing more than the moment I was in.” He rode that feeling all the way to the finish of his project but also wondered what was next. 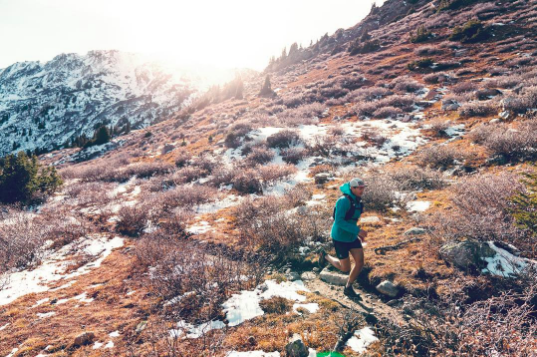 One of his new running friends guided him to an obvious choice based on his seemingly natural progression: an ultramarathon. With only three weeks’ notice, Williams was thrust onto the start line of the Silver Rush 50 in Leadville, Colorado, in July 2017. He finished in just under 12 hours, with little-to-no training, but was hooked. “When I finished, I realized that this was the sport I wanted to do. I loved it. Literally that night I was looking at what other races were out there.”

“At that moment, it kind of just clicked. Having a family history of cancer and Alzheimer’s, it kind of put it all in perspective. I want to live a life worth remembering if there were to come a point that I couldn’t remember it. For me, that meant spending as much time as I could outside. My most memorable experiences have been associated with or around nature. So, this felt like a very smooth transition.”

Just a few years down the road and in the infancy of his ultrarunning career, the 27-year-old Williams marks running both the Wasatch 100 and the Bear 100 in September 2019, and finishing in the top 10 in both, as two of the most memorable days of his life thus far.

“It’s a weirdly empowering thing to be able to say you can cover that distance in a day and cover it quickly, just by yourself on your two feet. It opened up this possibility of all of the things you can do in a day. Regardless if it’s a race or training, it’s an incredible way to experience the outdoors in a very visceral way while still having this time to myself to just think and be,” he said.

For Williams, running has become something even more vital to his mental health and a way to deal with the physical pain he feels each day and will have to manage for the rest of his life. He suffers from an incredibly rare autoimmune disease called Dercum’s, also referred to as adiposis dolorosa. Dercum’s is a painful buildup of fatty tumors along muscle and nerve cells throughout the body, but typically in the calves, chest and torso.

Aside from being painful they are mostly benign, but they can still grow and lead to other complications. Three to four times each year, Williams has 10-20 of the most painful tumors removed. At any given time, he has about 120 different tumors growing in him. It’s progressive and not degenerative, meaning that new ones will always continue to grow. At this point, it’s finding the ones that hurt or impede his movement the most, as there’s no real rhyme or reason to how the tumor growth begins. He describes the pain itself as constant, “It feels like a very acute point of pressure, like someone is digging their finger into your body.”

However, it hasn’t stopped him from pursuing anything athletically or professionally. “I’m not mad or sad. It’s part of who I am, and there are other people who are facing greater things out there. I can deal with it and it’s benign as of now, and that’s all I can ask for.” Meditation, reading, hiking and practicing mindfulness also help him manage the effects of the disease day-to-day. Recently, he has tailored his diet towards decreasing inflammation in his body which has also helped but running is still his preferred treatment.

When he stopped his pursuit of collegiate ball sports, he assumed his athletic career was done. However, now it’s become a way to manage Dercum’s and see what’s possible. “Running is the only time where I can be pain free or not in my head thinking about my disease. It’s the only time when I don’t feel anything. It’s cool to see that the body can still do that and will be able to do that for quite some time despite other things.”

Williams credits his doctors that specialize in non-invasive surgeries and their incredible ability to get him back up and running a week after each procedure. Together, they try to plan each surgery after a race so they can fit it into a recovery week.

Without running and the community that surrounds him, the disease would be all that more challenging. He believes he’s been able to keep it manageable with the support of others. He reminisced about finishing Silver Rush 50 and being celebrated at the finish line as a winner, even though he was hours back, and more recently spoke of races he completed this year. “If you look at Skip at the end of Lake Sonoma or Brendan at the end of Broken Arrow, they’re there all day at the finish line just giving hugs. That’s such a powerful embodiment of the sport. That’s really what it is, people are there from the start no matter where you finish. That’s what kept me coming back to the sport and hooked me.” 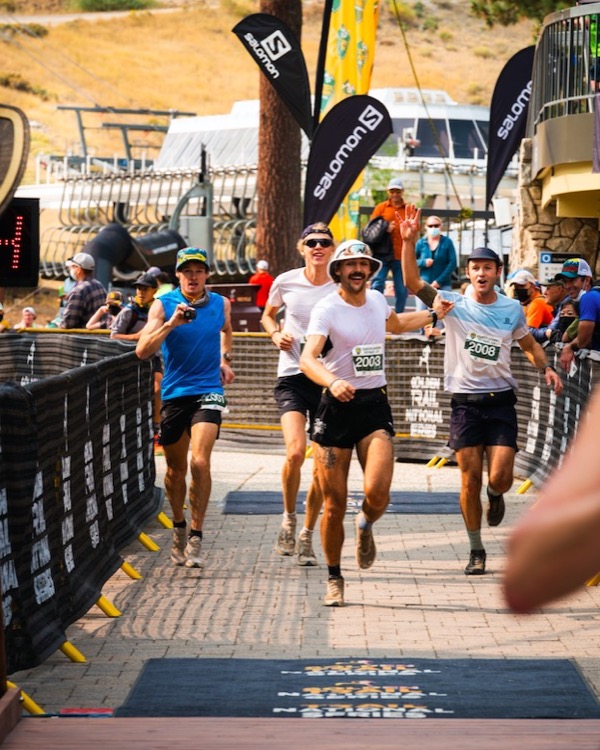 Williams took fifth at the Lake Sonoma 50 in September, just months after partially tearing his right Achilles at the Black Canyon 100K in February, and wanted to pile on the challenge to close out the year by registering for the first ever Broken Arrow Skyrace Quad. Runners accumulate nearly 100k of racing over three days in four race starts, totaling 20,000 feet of elevation gain at altitude.

Coming back from the Achilles injury, he knew he wasn’t going to be in top race shape and went after the challenge out of pure curiosity. “I wanted to be there for the community. The Triple Crown represented a different feat of endurance—more of a stage race than anything else. Living in Truckee, it was a no brainer to see if I could handle that.” Also known for their incredible endurance feats, both Courtney Dauwalter and Max King coaxed him into the fourth race on the third day.

Williams admittedly struggles with self-control in terms of pacing. “It was more of me subjecting myself to what could possibly be a very harsh learning experience if I couldn’t figure out how to manage three days of high intensity.” However, he was successful, and underwent his third surgery of the year just days later to relieve pain associated with Dercum’s.

Up next for Williams is redemption at Black Canyon in February 2022. His next tumor removal surgery is set for the week after the race, but right now, he’s just taking it one day at a time. He’s grateful the sport he loves surrounds him with so much joy and pain-free moments with each run.

“It’s really easy to fixate on what’s going wrong, and often times it comes at the cost of overlooking what’s going right. What’s going right is more consistent, and so when something goes wrong it tends to jar us and we tend to fixate on it.” Williams continued, “I’m just focusing on understanding the beauty and monotony in the day-to-day things. Not every day has to be spectacular to have beautiful moments.”

Running is not just healthy, it’s preventative, it’s healing, I believe that. We can use & enjoy this kind of inspiration and teaching in our lives.

Couldn’t agree more Jesse, thanks for reading and so happy you enjoyed the story.

It makes me so happy to know there are other trail runners (an ultrarunner even!) out there running through the pain of Dercums. It is hard mentally and emotionally dealing with a condition most people have never heard of, let alone physically pushing through and continuing in this sport. Thank you for this article and thank you Logan for sharing. I am also a trail runner with Dercums when the pain allows and it’s very encouraging to see someone thriving despite it.

I’m glad this piece resonated with you Jamie! If you want me to connect you with Logan, I’m sure he’d be happy to chat with you more about running, Dercum’s…anything. He’s a great guy. Happy Holidays to your and yours!