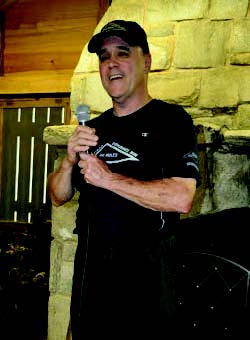 Blake Norwood, 68 of Raleigh, NC unexpectedly died on October 29. After bringing flowers to his wife that day, Norwood took an afternoon hike on the Mountain-to-Sea trail along Falls Lake near Raleigh, NC. Norwood stopped while his dog swam on the shore of the lake, where he then passed away of natural causes.

Norwood founded the Umstead 100 mile race in 1995 and served as its race director for 20 years until stepping into an RD emeritus role this year. Umstead enjoys a stellar reputation among 100 mile races, and was especially well known for supporting, encouraging and celebrating first time runners at the distance.

Rhonda Hampton, The New RD Of Umstead Had This To Say:

“I am not sure there is another person who has encouraged, guided, inspired and provided a more exceptional platform for more ultra runners to complete their first 100 mile run than Blake. The one thing that has amazed us is that our web posting of his death immediately had over 18,500 views. I am not sure we will ever know how many lives he touched. Blake’s success as a race director came from his love and understanding of ultrarunners. Everything he could think of to help runners meet their goals, he incorporated into Umstead 100.”

Norwood ran his first ultra, the JFK 50 in 1990 at age 44, which he went on to complete 10 times, with a PR of 9.23. He also completed nine 100-mile races, including The Western States 100 twice. After knee injuries curbed his running, Norwood took to biking, which he did across the United States, east to west coast, as well as a bike tour from Mexico to Canada.

Norwood served as a Colonel in the US Army and was a civil engineer and project planner at the NC Department of Transportation.

Below is Norwood’s background story about creating the Umstead 100.

How does an ultra event begin? In the case of the Umstead 100, it began as a training run preparing for the Hardrock. In 1994, Tom Newnam and I signed up for the Hardrock 100. As part of the training, Tom and I planned a 150 mile training run. Our previous longest timed run was at the 1992 Western States, about 28 hours. We obtained permission from Umstead State Park to run through two nights on the Park’s main trails. Our friend, co-worker and running partner, Jerry Dudeck, volunteered to check on us several times during the run to see if we needed anything not in our drop bags.

Tom and I started the training run at exactly 8:00 am. In our first lap, we met up with Joe Lugiano, a local ultra runner and now the Assistant Umstead Race Director. We ran about a lap and a half with Joe. I was happy to see Joe leave as we were running much too fast to accomplish our desired goal. Shortly after Joe left, Tom and I began to discuss if we would break 24 hours for the first 100 miles. Sure enough at 6:21 am the next morning we had covered the 100 miles and decided to call it a good training run.

During spring and summer of 1994, we began to discuss that we needed a 100 mile ultra event in North Carolina. We remembered what a wonderful venue Umstead State Park had been for our training run. Tom, Jerry and I committed to conducting a 100 mile ultra event at the Park in spring of 1995. The guiding principles by which we developed the concept of the Umstead 100 were:

2. encourage the growth of ultra running in North Carolina and the Triangle area in particular

These have remained the guiding philosophy of the Umstead 100 to this day.

Destination Unknown: The Royal Order of The Crimson...