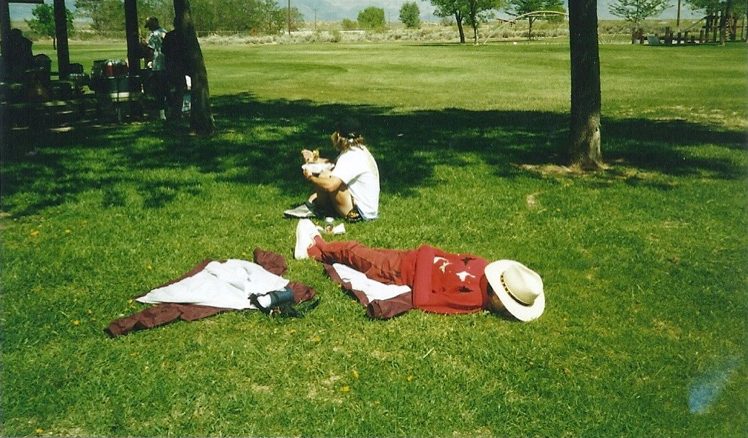 My grandmother enjoying a grassy nap at Millpond Park as I inhale food post-High Sierra 50-Mile, May 1999.

“Our achievements rest on the accomplishments of 40,000 generations of our human predecessors, all but a tiny fraction of whom are nameless and forgotten.” – Carl Sagan, ‘Cosmos’

The swirling pine scents, cacophony of cheery birdsong and crisp mountain air felt cleansingly cathartic; a sharp contrast to the institutional smells, soul-numbing sterility and hollow clamor of the hard, angular interior of a Carson City, Nevada convalescent center still squarely in the rearview mirror of my mind. Objects in mirror are closer than they appear. We would be wise to heed that notion regardless of what life paths we’re presently traveling, but we rarely do; until we’re forced to. Years earlier I had driven past an assisted living center, a sort of middle-of-the-inexorable-decline-shelter on the tightly descending switchbacks from complete freedom and infinite possibilities to newborn-again helplessness, on my way to some now-forgotten race, and thought to myself with more than a trace of guilt for not stopping, After a lifetime of expanding horizons, that building now represents the sum total of my grandmother’s geographical existence.

Convalescence implies recovering from something, but my grandmother was now nearing the endgame of this world we know. The last time I had visited had been with my grandfather and the impression had been strongly of being in the presence of someone with one foot in a life she could no longer remember and the other in a void where memory didn’t matter. This time I had come alone and to say goodbye. Shakily vocalizing a monologue of familial love to a woman whom as a child had no life to me outside of being the grandma of Sierra Nevada cabin summers and holiday gatherings, and who now lay withered, shallowly breathing and unresponsive beneath a pile of blankets, was the most difficult thing I had ever done.

The tears came before the trailhead. After several miles, an outcrop of granite yielded a spectacular view of Lake Tahoe. I slowed to a stop, found a comfortable time-sculpted granite perch and stared across the reflective waters. My legs felt rubbery even while sitting. There was simply too much emotional weight.

The utterly dehumanizing process of Alzheimer’s makes it difficult for me to believe unwaveringly in much of anything really, even the notions about life I’ve come to hold sacred, and continue to cling to. Notions such as memories and experiences, and interactions with nature and other sentient beings, constituting the only things that really add up. Alzheimer’s strips you first of all these in a slow-motion series of subtractions.

In his book The Forgetting, author David Shenk describes the disease as the unraveling of a ball of nervous tissue yarn in which short term memories are unwound first, followed by longer term memories and recognition of people and places. If you live through the devolution process long enough, the older, reptilian parts of the brain that control autonomic functions requisite for basic survival such as respiration, eventually succumb. My grandmother “officially” died of something like congestive heart failure, but the sum total of the regressive process was easily a decade.

It is the ultramarathon of death, and during its course it painfully spotlights the importance of remembering in this life.

Were it not for the invention of writing, and the ever-evolving ability to store information external to our synapses, a whole lot more would be “nameless and forgotten,” and advancement, in any arena, would be significantly slowed. Scientific progress and athletic progress, whether measured in personal records or world records, builds on the achievements of the past. A scientific colossus with the requisite ego required to accomplish great things himself, Isaac Newton nevertheless understood the truth of the process and his place in it, when he wrote to Robert Hooke in 1675: “If I have seen further than others, it is by standing upon the shoulders of giants.” 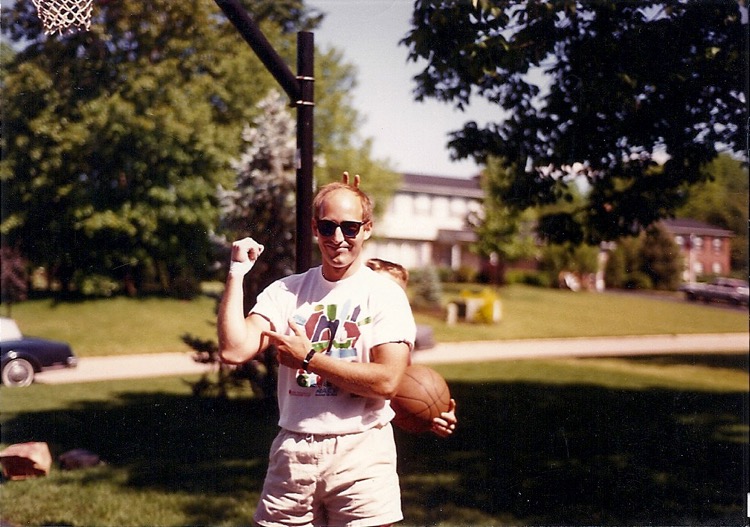 My high school coach, Dave Niemeyer, who sent me down the “running as a permanent lifestyle, not a temporary school sport” path I’m forever grateful for. Cincinnati, OH, 1989.

The ultrarunning corollary is this: if I have run faster than others, it is by racing upon the performances of my predecessors. And this is precisely why it frustrates older generations of runners whenever they witness young trailblazers acting as if they are the true groundbreakers in the sport because records are so much faster now. Paces per mile at various distances – as does knowledge within various disciplines – builds upon the past. Aunt Jemima syrup bottles with duct tape handles, or something similar, were a necessary stepping stone to handhelds with tension straps and bite valves. Sub-16 hours had to consistently be run at the Western States 100 before someone came along to prove that sub-15 was also attainable.

To remember the past is to respect it. Even the most independent of us in this most independent-at-times of sports, do not live in a bubble of rugged individualism feeding the fire of progression alone. We are all interconnected, and we all need each other. We are all interconnected, and we all need each other, whether in running shoes or not. Life in general and the life of a runner follow the same bell curve of potential. There is a rise, a peak, and an inevitable decline. For precious few, that peak contains perhaps a Nobel Prize or an awe-inspiring record – a larger than life recognition. But live long enough and you will likely once again be as dependent on others as you were as a child. Run long enough and you will eventually be slower than when you took your first steps. Objects in mirror are closer than they appear. The trick is to strike while your iron is hot without fooling yourself into believing you were also the creator of the metal and the sole source of passionate heat.

The majority of the people most influential and important in our individual lives – family, friends, training partners, coaches, teachers, ultra friends, will not be, even temporarily, immortalized for something they did in their short tenure here, but it is our own “nameless and forgotten,” at least to the larger picture of history, selflessly assisting us on and sharing in this journey, like pacers in a race, who deserve a too-often unsung recognition as galvanizers to our goals. Piled in a shoebox in a dusty closet corner, I still have the letters my grandmother obtained endless joy writing; I doubt she ever really understood the passion for running I carried into adulthood but she always supported it, with words, and once in person at my backyard ultra.

When my grandfather passed away a decade ago, the last thing he said to my dad was, “Remember me.” In the end, irrespective of the level of success achieved in our forgettably transient time here as athletes, as humans, this is really all there is; and it would appear, the common denominator of our strongest desire, in sport and in life.