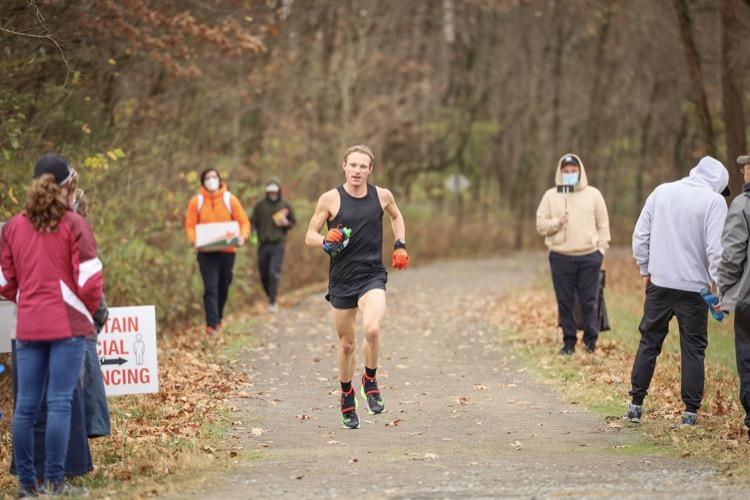 Taggart VanEtten runs for the win at the 2020 Tunnel Hill 100. Photo: Chad Colson

As we inch closer to the holidays, the UltraRunning Calendar continues to thrive with some big races going off from coast to coast.

The highlight of the weekend has to be the notoriously swift Tunnel Hill 100 in Vienna, Illinois, starting at 7 a.m. CST on Saturday, November 13. The flat and fast course saw the 25-year-old rising star Taggart VanEtten set the second-fastest time last year, just over 10 minutes behind Zach Bitter’s 2018 100-mile trail world record in 12:08:36 that helped earn him the #7 Ultrarunner of the year.

The two will face off head-to-head on Saturday in what is likely to be a quest not only for the win, but a new course record, potential world record and the first sub-12 hour 100-mile finish the course has seen. In May, VanEtten broke Bitter’s 100-mile treadmill world record by running 11:32:05 at an event in a Morton, Illinois, brewery. His result was 37 minutes faster than Bitter’s record time in May 2020. Last Saturday, VanEtten ran 2:22 at the Indianapolis Monumental Marathon.

Bitter appears to have last raced at the 100 Mile USATF Championships at the Jackpot Ultra Running Festival in Henderson, Nevada, on April 23, where he won in 12:52:13. He injured his right ankle in July and has been steadily working back into shape over the last few months.

Trail Run Live will purportedly be live tweeting coverage of the battle. Give us your winner and their time in the comments below.

Closer to our UltraRunning Magazine headquarters in Bend is Run The Rock 50k/50m in Terrebonne, Oregon, on Saturday and Sunday. Both loop-style races within Smith Rock State Park and the Crooked River National Grasslands offer stunning views of the Cascade mountain range. Recent fourth-place finisher at the Broken Arrow Skyrace 48k, Sandi Nypaver is on the start list for the 50-miler and local Bendite Drew Macomber is slated to lead the charge on the 50k course, having recently won the Three Sisters Skyline 50k in September.

Down the coast and just north of San Francisco, the Mt. Tam Trail Run 50k is also taking place on Saturday morning. The course features over 6,000-feet of climbing and descending in a single loop on the shoulders of Mount Tamalpais and amongst the infamous Muir Woods National Monument. David Sinclair of Truckee, California, has won three out of four ultras he’s entered this year, including breaking Carl Andersen’s 29-year old course record at the Silver State 50 by nearly 20 minutes in May, and is registered for this Bay Area bash. Sinclair undoubtedly has his sights set on breaking Rickey Gates’ 2013 course record of 3:49:21.

In Mesa, Arizona, featuring winding trails throughout Usery Mountain Regional Park on the edge of the Goldmine Mountain Range is Aravaipa’s Pass Mountain Trail Run. With both the 50k distance and this year the inaugural 50-miler, it seems as if there’s an ultra to be run nearly every weekend of the year in and around Phoenix. Local Nick Coury likes to take advantage of said opportunities; he has landed on the podium in seven out of the nine ultras he’s entered this year and narrowly missed his eighth at September’s Run Rabbit Run by finishing fourth, and is slated to run the 50-mile distance on Saturday.

On the Western slopes of Colorado in Fruita is the Kessel Run Ultra 60k/50m, the Franklin Mountains Trail Run 50/100k in El Paso, Texas, all on Saturday; and in Chattanooga, Tennessee, we’ve got the Upchuck 50k point-to-point race that is entirely on Cumberland Trail single track on Sunday.

We couldn’t possibly cover them all, so please keep us privy to What’s Up in Ultra in your community this weekend by letting us know in the comment section below. Have an event you’re excited about next weekend that we should include? Let us know about that one, too.

My wife is in Tunnel Hill, I will forward some brief remarks postrace!

Kimmy did 27:11, so it looks like the reputation as a fast course holds up, since she is normally better with some hills and heat.

Looked like a fun day out there, congrats to your wife Jesse.

Thanks! Have to praise the organizers, not just a fast course, but early-start 50-milers get 30 hours, bringing out some octogenarians etc!

I’m always so impressed by octogenarians competing at ultras…true inspirations! Will have to make it out to Tunnel Hill one of these years for sure.