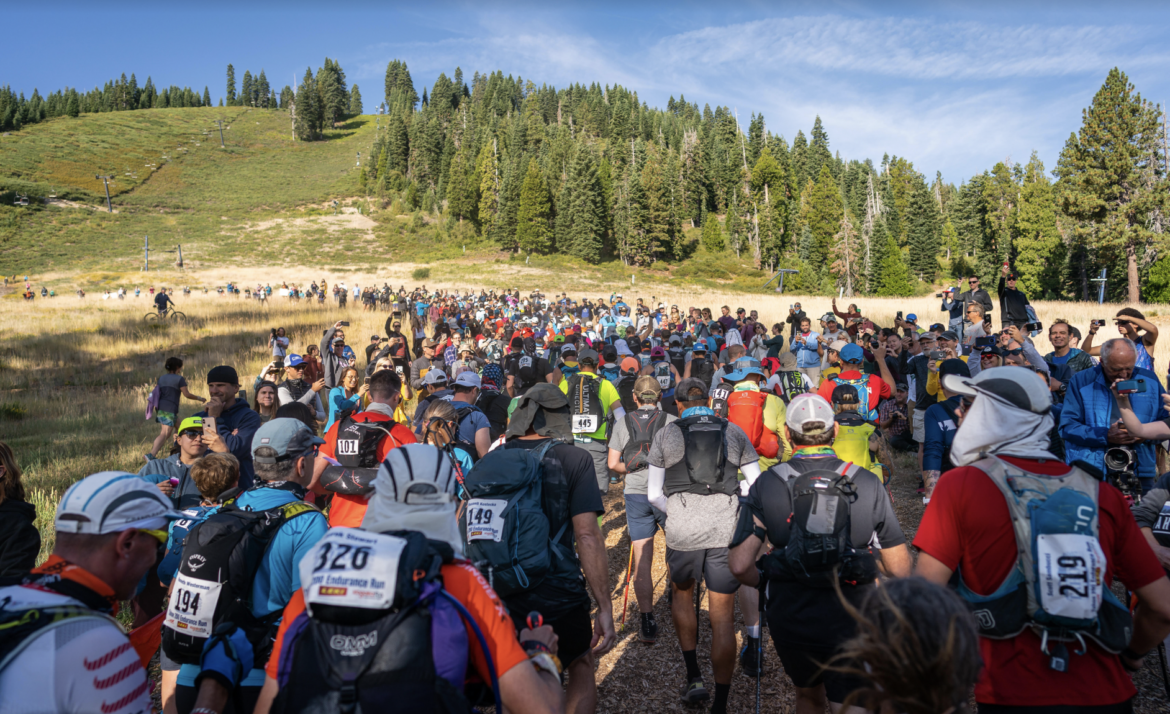 Runners take off from the Homewood Mountain Resort at the start of the Tahoe 200 Endurance Run. Photo: Howie Stern

What’s Up in Ultra This Weekend — June 18

If you thought last week’s UltraRunning Calendar was deep, wait until you see the 55 races on tap this weekend before the official kick off of summer.

Starting in Olympic Valley, California, is the Broken Arrow Skyrace 52k and five additional sub-ultra events. The marquee, two-lap course event, featuring 10,000-plus feet of elevation gain and loss at Palisades Tahoe, has over 600 registered entrants with the top two women and men in the race qualifying for the 80k USA Trail Team. Also on the line, is one of the largest prize purses in trail running with $22,500 for the first through fifth-place finishers. Get your Freetrail Fantasy picks in before the start on Saturday, June 18 for a chance to win some sweet prizes, too.

The Bighorn Trail Runs 100-miler and accompanying 52/32-mile races in Dayton, Wyoming, also on Saturday, is high-altitude mountain running at its finest. This event is extremely challenging due to the rocky terrain of the Bighorn Mountains and has become a favorite among avid trail runners. The out-and-back course reaches elevations of up to 10,000 feet, among fields of wildflowers and breathtaking scenery.

On the polar opposite end of the spectrum is Six Days in the Dome in Milwaukee, Wisconsin, beginning on Friday, June 17 and ending on Saturday, June 25 at the Pettit National Ice Center. The 48-hour, 24-hour and new 12-hour (day one) start on Friday. The 14-hour and second new 12-hour (day two) kick off on Saturday. The namesake race, the Six-Day, starts on Sunday, June 19. Race organizers are expecting approximately 150 elite runners from across the globe to compete in their attempt to break existing world, national and age group records.

Also flat, but outside is the Niagara Ultras in Niagara-on-the-Lake, Ontario, on Saturday, June 18. The course is a scenic 50k out-and-back on a traffic-free footpath following the Niagara River Parkway past Fort George and onto the brink of Niagara Falls before turning around. There’s also an accompanying 80k race.

Flying back to California and landing in Homewood is the Tahoe 200 Endurance Run lasting four days from Friday, June 17 to Tuesday, June 21. In what is typically a single loop around Lake Tahoe, fire damage from last year has forced the 2022 event into an out-and-back course featuring even more climbing than previous editions at roughly 40,200 feet.

More fun in different regions on our UltraRunning Calendar this weekend include the Millersylvania 50k in Olympia, Washington, the McKenzie River Trail Run 50k in Blue River, Oregon (the state’s oldest ultra), the River of No Return Endurance Runs 108/55k in Challis, Idaho, the Highlands Sky 40-miler in Davis, West Virginia, and the Logan Peak Trail Run 28-miler in Logan, Utah, all on Saturday, June 18.

What’s Up in Ultra in your community this weekend that we should know about? Drop a comment below, let us know what we missed or what’s lighting your ultra fire.

The always-popular Many on the Genny is now a 45-mile looped course around beautiful Letchworth State Park (aka The Grand Canyon of the East) in the Finger Lakes region of New York State.

Thanks Jeffrey, yes I am! It’s going to be so much fun!

Hope you’re having a great day out there Clement!

I’m not running any races this weekend, but here are two good ones in my home state of New York!

The East Coast 24 Hour Track Event is a local-to-me race. It’s an Upstate NY race that’s run on the track at Fayetteville-Manlius High School — a school that perennially has some of the top boys and girls track and cross country teams in the nation.

Also, the Great New York Running Exposition is a 100-mile or 100k tour of NYC’s five boroughs on foot, showcasing much more of the city that you’ll ever see at the NYC Marathon.

Thanks for putting those on our radar Pete! That loop through NYC looks epic, to say the least!