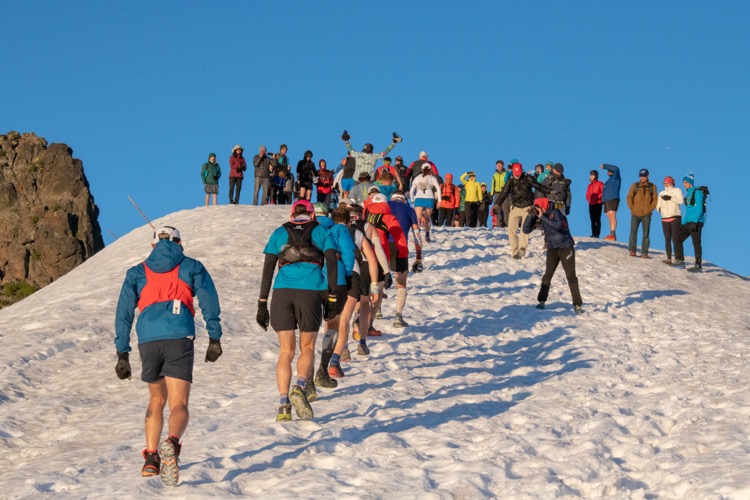 The Rise of Ultrarunning

Upon looking at both the oldest and youngest finishers, the story is the same: participation levels in ultrarunning continue to trend upwards, as well as the number of opportunities around North America for runners to experience their first ultramarathon.

“I think we’re seeing a typical S-curve here. Slow growth for a long time, then sharp growth for a time, that will eventually bend over to slow growth again.” John Medinger, Western States Endurance Run past president and board member, said in a recent conversation.

Although he admits that he’s not exactly sure where we are on that trend curve he still believes, “North America has a longer history so will probably slow down first, (however) worldwide, we still have a lot of potential growth.”

No matter where we are on the curve, 2019 continued to show expansion of ultras in North America to the tune of 61% of participants being first-timers, helping push the North American finisher totals to 127,296—a 12% increase over 2018, or a total of 13,731 additional finishes. 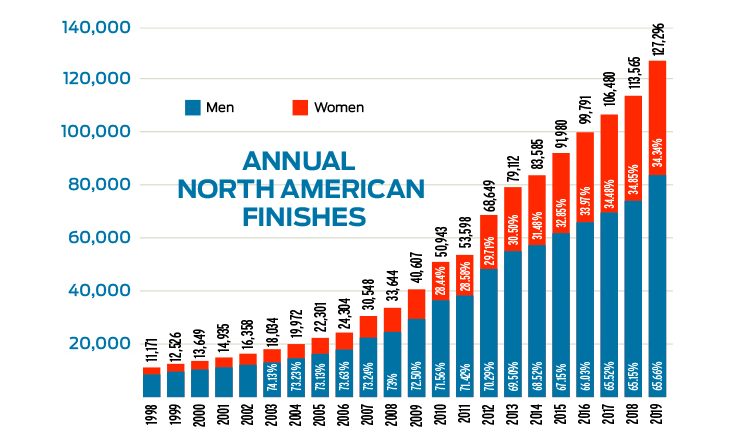 While at the same time we’re seeing the average age of participants drop closer and closer to 40 years old, it also appears that the veterans of the sport are sticking around longer and longer, helping to fuel growth on both ends of the age spectrum.

In 2018, Udon Beidler of Easton, Pennsylvania, was the oldest female finisher of a 100-miler at age 71, while Bonnelle Murphy of Solvang, California, made up the other three 100-mile finishes for 70+ year old women. Just one year later, 2019 saw seven different women finish eight 100-milers, doubling the number of 70+ female finishes compared to the year prior. Beidler and Murphy were again on the list, but the former was eclipsed last year by Erlinda Biondic, age 79, of Aurora, Ontario Canada, as the oldest woman to finish 100 miles.

“At its best, ultrarunning becomes a lifestyle. It’s a central part of your life, many—even most—of your friends are also ultrarunners. With so much positive feedback, you’re more inclined to stay with it as long as you can. Veteran ultra people are, at worst, kindred spirits; at best, they’re like extended family,” Medinger said.

Biondic actually didn’t stop at 100 miles last May at 3 Days at the Fair in Augusta, New Jersey; in total, she ran 393 miles in the 240-hour event, confirming age truly is just a number. In 2020, she’s already signed up for the Six Days in the Dome 48-hour race this July in Milwaukee, Wisconsin, where at 80 years old, she’ll likely run 100+ miles again. 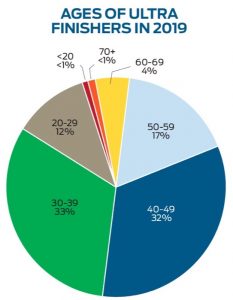 Even the elites of the sport are continuing to show they can compete. Three 40+ year-old runners (Browning, Leblond and Schlarb) were all in the top ten 2019 Ultrarunners of the Year announced last month. Although, Medinger doesn’t believe that can be sustained. “Longevity at the pinnacle is probably going to be more short-lived. There’s just too much young talent coming into our sport. Racing at elite levels is hard, both mentally and physically. A few will have the ability to stick with it, but I expect most will have a limited time at the top.”

“The sport has also become a family affair for many, so participants are bringing their offspring along with them from an early age, and it has become a part of family vacations and traditions,” said Aliza Lapierre, a professional ultrarunner from Williston, Vermont, who has had 50+ ultra finishes since 2004.

Case in point, at the ripe old age of 13, Sebastian Salsbury became the youngest known person to qualify for the Western States 100 (although not old enough to run if selected in the lottery) by finishing over an hour under the 2018 Black Canyon 100K qualifying cutoff time.

“I have gone from “the little kid,” to now when I enter a race I know I can be competitive,” Salsbury said with a smile.

He’s right and although he wasn’t one of them (he did win a 12-hour race with a smaller number of participants), 47 racers under 22 years old and as young as 17, won ultras outright last year in fields of 50+ runners.

Now 14, Salsbury entered his first ultra when he was just nine years old. “So I have always sort of stuck out in the crowd at races while growing up in an ‘adult’ sport,” he said. Yet he does, and has always felt completely comfortable with the age disparity at events as well as being grateful for the inclusive atmosphere older runners have always created.

He participated in four ultras last year observing, “There are so many more kids at ultra trail races than ever before, and I’m proud to be a small part of that.”

Medinger, who ran his first ultramarathon 40 years ago at the age of 29 and has completed 130+ ultras, has seen the changes in the sport in relation to the road racing circuit.

“Thirty years ago, those who ran ultras mostly got there after running marathons for a while and looking for a new challenge. There were very few runners in their 20s, and most were in their 40s and 50s. In more recent times, many ultrarunners went straight there, bypassing the road running scene altogether,” he said.

Lapierre is astute to point out that, “The nice thing about running is it requires simply putting one foot in front of the other, so it’s easy to join in no matter age or athletic background.” It’s considered much easier on aging knees and other joints (or developing ones for that matter) to run on trails rather than pounding out road miles, arguably making it easier to stay healthy.

It’s clear that regardless of age, the ultra community embraces every participant, and helps guide them through the learning phases while cultivating a passion and helping instill healthy habits. Those that have been around the proverbial block a few times lending their knowledge to newer runners helps to further instill a strong familial atmosphere.

“When I entered the sport in my mid-20s I was taken under the wings of people that I had never even met in person,” Lapierre reminisced. “We corresponded over the phone and message boards, and on several occasions we would each drive hours to meet just to share a long run followed by a meal afterwards. This made me love the sport even more as my competition also turned out to be my biggest supporters.”

In a world that’s constantly egging us on to compare ourselves to others, the sport of ultrarunning is bringing people together from all backgrounds and age groups to build camaraderie through competition, and break down barriers despite our differences.

The future is bright for ultrarunning and you don’t need the numbers to prove it; insight from all the generations indicates how strong the community truly is and more importantly, that the momentum continues to build into the new decade.

Great story. Sure, this crazy sport isn’t for everyone. But it’s neat to see: the power of human determination, that age need not be a barrier and people of this age not always needing electronics to survive. May more people find the joy and health that comes from having lost track of how many miles you’ve run out in nature