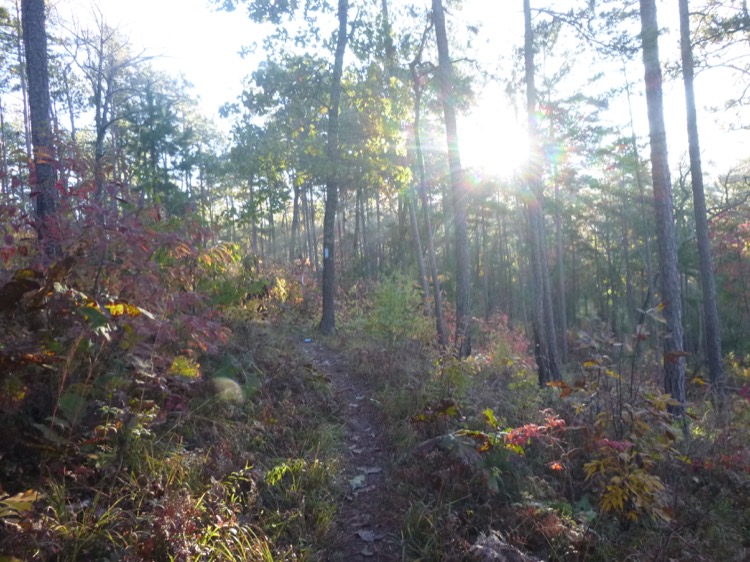 Runners love Pinhoti. It seemed like everybody I talked to at packet pickup was either returning to run this race in Alabama because they couldn’t get enough of it or they were out to avenge a DNF. Pinhoti is like a flame in the night – drawing in moths, but also, ready to burn them into oblivion.

The Alabama portion of the Pinhoti National Recreation Trail dates back to the 1970s, and the name comes from a Greek word meaning “turkey home.” Thus, the distinctive turkey track logo that decorates the trail markers and race swag. It’s situated in the Talladega National Forest and is point-to-point following the trail from Heflin to Sylacauga, showcasing the southern portion of the Appalachian Mountains. 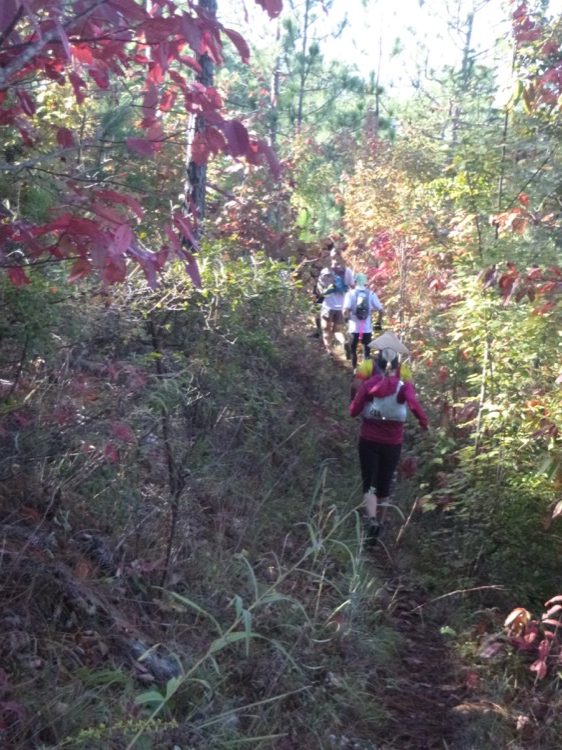 After the bus ride up from Sylacauga, runners leave the cozy fire pit at the start and are immediately swallowed up by the forest while engaging in a battle with a narrow, grinding single-track that twists and turns and rises and falls through the woods for 35 miles.

After 35 miles, runners climb up Blue Mountain to Bald Rock and get rewarded with a sweeping view of what seems like most of Alabama. The backside of this climb, down to the relocated Cheaha Lake aid station, is a shock. With my headlamp waiting for me at Cheaha Lake and the dark falling fast, I had to use a handheld flashlight to navigate down what amounted to a boulder field with just one free hand, when I could have really used two.

From about 50 miles into the race until you reach mile 85, runners encounter the most challenging sections of trail along with more radical elevation change. Temperatures dropped into the 30s here, so proper clothing became a big issue. For back of the packers, this was in the dark and the cutoff times get closer and closer with each aid station. My margin at Wormy’s Pulpit at mile 79.5 was critically short, so I had to push hard to get to Bulls Gap at mile 85.6 where I made it with just 15 minutes to spare.

Luckily, or perhaps unluckily, an extra 3 miles had been tacked onto the next segment of the race due to a bridge under repair, so an hour was added to the cutoff at the last aid station before the end. That helped with the time pressure, but the final two stretches of the race, which had been billed as “easy” since they were all gravel roads and streets within Sylacauga, were 10.1-mile and 7.5-mile sections. I could smell the barn door but when I reached the manicured practice fields just shy of the finish at the Sylacauga High School track, I almost stretched out on the soft grass thinking maybe I’d just finish some other day.

No report about this race would be complete without mentioning that the aid stations and volunteers at Pinhoti are truly exceptional. Funky, uplifting music was featured at many of the stops as well as very welcoming bonfires during the cold night. The food was great and I couldn’t count how many times I witnessed a volunteer bending over a spent runner trying to sweet talk them back onto the trail. Dogs had their place in this race, too. Every aid station seemed to have a calm K-9 present. 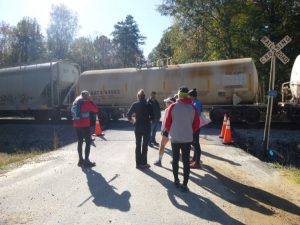 And, finally, a couple of random notes. There are many hikers camped along the trail at this race, so it wasn’t uncommon to find yourself running right through a campsite in the middle of the night. I always love to plod by a tent and hear someone snoring inside. For a minute, that soul and I are bonded in the love of “just being out there” even though we’re going about it in such different ways. Also, Pinhoti gave me a first in my trail running experiences: not once but twice being stopped in the middle of an ultra to wait for a slow, infinitely long freight train to pass through the forest. Sweet home Alabama.