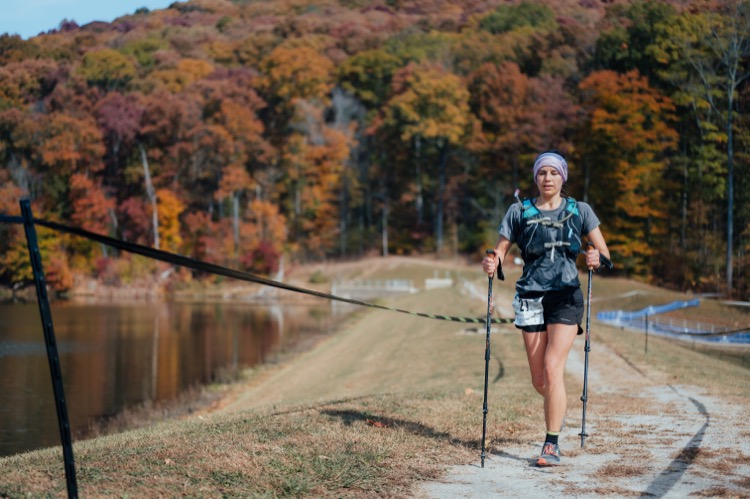 Jill Smith makes progress on the exposed section of the course. She went on to take 2nd place in the 50k. Photo: Misty Herron

Pike Lake Ultramarathon: A Cup of Tea with Satan

What makes a race special? Is it the beautiful scenery, the runners who toe the line or the passion of the volunteers and organizers? For some races it is simply the history behind it—races like the Dipsea, Western States or Ultra Maratón Caballo Blanco have such unique, odd and fascinating origin stories that you can’t help but be drawn to them. The truth is that races are special for a variety of reasons, just like any sporting event, and that we as athletes, fans or friends of runners are drawn to them for many different reasons.

The Pike Lake Ultramarathon (the proper name is “The Pike Lake Ultramarathon powered by VIRUS”) has no snazzy origin story, important trail history or legendary runners who attended the inaugural event. It simply had 60 athletes who believed in the idea that we could take a nearly unheard-of state park in southern Ohio, and over the course of a warm October weekend, turn it into a proving ground of endurance. And that is exactly what we did.

Pike Lake State Park is one of over 50 state parks in the “great state of Ohio” (we have to say that). Ohio is no stranger to ultras; as you might know we host the Burning River 100, Mohican 100 and many other ultras, from 50k to 50-miler and more. Ohio’s recent claim to ultra fame could be the Backyard race in Lucasville that has given us the incredible feats of Ohio runners like Harvey Lewis and Jennifer Russo who went on to the run in the 2022 World Championships. 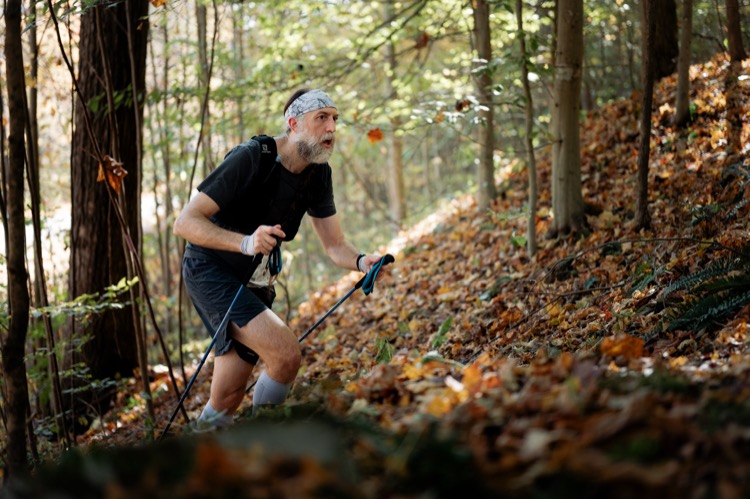 Chris Haas crests one of many steep hills on the course. Photo: Misty Herron

Pike Lake State Park and its adjoining Pike State Forest are hilly—much hillier than one might expect for Ohio. The further south you travel in Ohio, the more the rugged nature of its proximity to Appalachia shows. In fact, Pike Lake State Park is located in an unglaciated portion of the Appalachian plateau. The trails in the park are rugged, rocky, off camber and in many cases, straight up the side of a hill. Of course, this can only mean one thing: the perfect place for an ultramarathon.

The race is hosted by the TINAR Race Series. With every event we do, we create both a “long” and a “short” distance. Last year, at our first race, the Alley Trail Marathon, we did a traditional half and full marathon (both with considerable amounts of vertical ascent). At the Pike Lake race this year, we offered a 10k loop (which, after course changes, came out to 7.1 miles) with 1,600 feet of vertical ascent, and a 50k race which was five loops of the 10k course. Doing the math, that is over 35 miles and 8,000 feet of vertical ascent—not bad for Ohio.

Runners came from all over—Ohio, Michigan, Pennsylvania and even Florida—to try to conquer the rugged trails of Pike Lake. With $600 on the line for first place and cash and prizes five spots deep, the competition was particularly fierce in the men’s 50k race with four runners staying close to each other for the entire first lap. In the end, Zach Crim won by over an hour, smiling as he strode across the line in the sunny, warm afternoon. His secret? “Send it, don’t expect it,” he said. He said he was going to use the money to take his daughter to Disney World, rousing a chorus of “aww” among spectators. Within a few hours, we had all five male finishers on the podium, Zach holding his giant check and still enough light to take good photos. 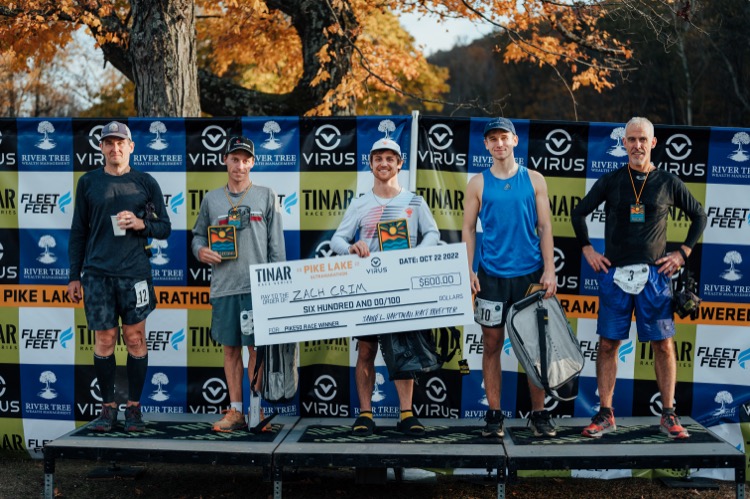 The men’s 50k podium, including Zach Crim, who won the 50k race in 6 hours and 22 minutes. Photo: Misty Herron

Shortly after, we held awards for the women, one by one, as the gaps between their finishes became longer and longer. Hannah McCorkle, from Columbus, won the women’s 50k race and claimed the coveted TINAR Race Series Champion title, while confiding, “You must’ve had a cup of tea with Satan when you wrote this course.” All I could do was laugh, knowing the trails here had no agenda but to traverse each hill and valley—all I did was string them together. Jill Singer, winner of a previous TINAR race in 2021, came in second, nearly 2 hours after Hannah. As darkness set in, more finishers trickled in all through the night.

We set the cutoff at 8:30 p.m., exactly 12 hours after the start of the 50k race. The 10k runners had, by that time, started and finished, even those simply hiking the course. By 8 p.m., all 16 50k finishers had come through the starting line, showing emotions of joy, exasperation and sheer bewilderment that they made it that far. A handful of DNFs happened throughout the day, including one from a local man named Brian Miller, who had never run more than a 5k race prior. “It was by far the most grueling thing I have ever done,” he told me, after I prevented him from starting lap five after the cutoff time. He pushed himself that day to 28 miles, showing all of us what true perseverance really means. 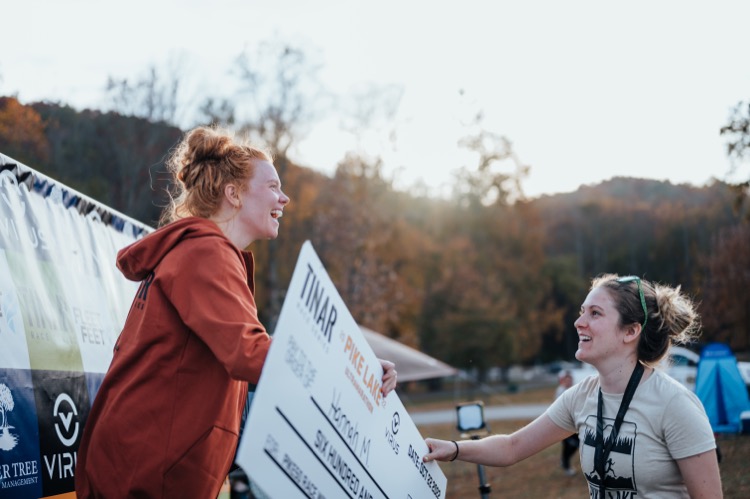 As the warmth of the day evaporated and the soup from our incredible vegan caterer cooled, we began to dismantle the course, or at least part of it, that night. The truss, the scrims, the fence posts—we took them all and loaded them back into the truck, attempting to leave the park with only trampled grass and hundreds of new Strava times. I reflected on the journey of each runner, from the folks who ran their first trail 10k that day, to those who podiumed for the first time at an ultramarathon. This is to say nothing of my extraordinary crew, the staff of TINAR and all of the wonderful volunteers who trickled in and out of the aid stations.

From the time runners checked in on Friday to when the music turned off Saturday night, we created something special at Pike Lake. We formed a community based on endurance, grit and fellowship. This sacred 24 hours was not by accident; it was a direct product of the event staff, volunteers, park staff and runners—runners who brought their desire to race hard and fast on the technical trails of southern Ohio. As a race director, I am constantly amazed by the challenges I can dream up that someone will conquer, and I am equally amazed by what lengths individuals will go through to support me and TINAR in our pursuit of excellence in trail racing. Zach’s words will ring in my ears forever, a homage to gratitude for what we do, as both race directors, and athletes, in this incredible sport: “Send it, don’t expect it.”