Piceu and Krar named #3 2018 UltraRunners of the Year 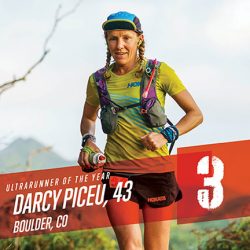 Darcy Piceu is the third ranked woman for 2018. Piceu was undefeated at the 100-mile distance, impressively winning on four significantly different courses – the highly technical HURT 100, the severely mountainous Ronda dels Cims in Andorra, the mountainous but runnable Angeles Crest, and the swift Javelina 100. A psychologist and counselor, the three-time Hardrock champion lives in Boulder, Colorado. Photo: Howie Stern 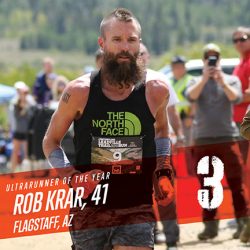 Rob Krar, the 2013 and 2014 Ultra Runner of the Year, is ranked number 3 in 2018. After winning the 2015 Western States 100, Krar raced very little for the next 2½ years. He raced a series of low key 50Ks in the first half of the year, winning all of them. He then won the venerable Leadville Trail 100, posting the second fastest time in race history, nine minutes slower than Matt Carpenter’s 2005 course record. (The two times are roughly comparable; the 2018 route is believed to be about a mile longer, but consists of a bit less trail and a bit more road.) Krar, a Canadian citizen and former Butler University track star, lives in Flagstaff, Arizona with his wife Christina. Photo: Mark McCaslin