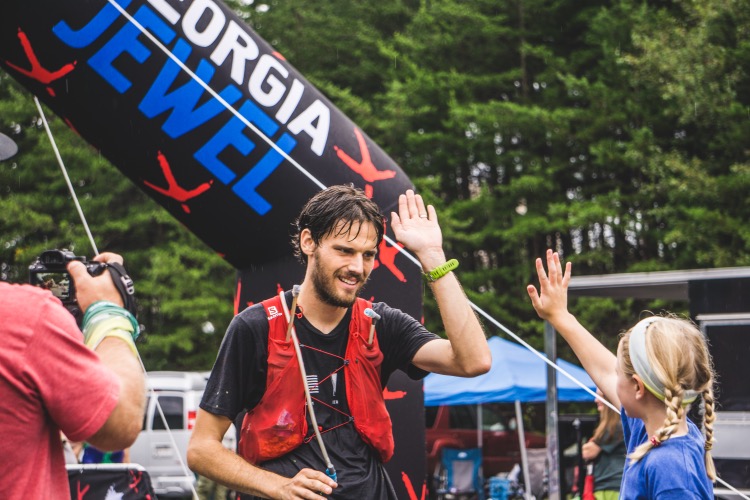 High fives were a must at the finish line of the 2021 Georgia Jewel. Photo: Lucy Baker

How Young is Too Young?

This article was originally published in the May/June 2022 issue of UltraRunning Magazine. Subscribe today for similar features on ultra training, racing and more.

I ran my first marathon when I was 13. At the time, I thought it was somewhat of a novelty. I knew few people my age that would run such a feat. And like all teenagers, I succumbed to the scope of my own neighborhood bubble. Turns out the feat was pretty ordinary (I think there were a half dozen or so other teenagers in the same race), and teenagers around the world continue to consistently run marathons – some for fun, some as a dare, some as part of their high school cross country program and others just because they want a challenge. Fast forward to today, and we are seeing more and more young teenagers test out the sport of ultrarunning. Like their marathon brethren, these teens have a variety of reasons to test out an ultra. The phenomenon has prompted some race directors to come up with age limits, while others insist on parental supervision and some remain mum on the subject altogether. There is much debate about young runners and how much running one should do before puberty. Adding complication is that ultrarunning is an elective sport, often without a peer group for comparison on best practices. Further fueling the fire is the growing spotlight on the sport, increased participation and a willingness for some teenagers to partake in the same thing their parents did after serving as a willing crew member.

Rest assured, there are many sides of the fence in this deliberation. In addition to that, at the end of the day, the parents are the ones who ultimately get the final say. So, as we deliberate and arbitrate for an ultimate decision, let’s offer up some philosophical points of view on athlete and human development based on the most common questions I get from parents.

Should teenagers be concerned about long-term damage?

Ultrarunning, at its core, is an arduous endeavor. It takes a toll on the body just to get to the start line, but more and more, we are learning that the actual races are what appear to be potentially causing the most damage (Scheer et al 2021). And this raises a question for many parents and race directors: Are we setting up our children for long-term health consequences by letting them take on an ultramarathon? Let me be clear here. Any endurance training involves risk. Some of that risk involves the musculoskeletal system, but there can also be risk to the heart and other organs. Undertaking this amount of stress, even while those organs are fully developed, can have some long-term consequences. But the question remains, does any of the training and racing stress on developing organs and tissues have the potential to cause long-term damage? The fact is, we don’t know if that damage is going to be problematic in 20 or 50 years. Teenagers have generally resilient bodies. They can rebound quickly from bumps, scrapes and bruises that would leave an adult hobbled for several days. There is very little compelling evidence that a moderate amount of endurance training undertaken as a teenager causes long-term harm, provided there is adequate energy intake and the training program is reasonable.

How much training should teenagers do?

Let me be blunt. The training framework used by adults for ultramarathon training should not be applied to teenagers. I say this as someone who has written two books on the subject of training (adults) for ultrarunning. Athletes of this age are going to improve about the same amount regardless of the precision of the programming. More than this though, is that physical training is not the most important element in the equation. Above all else, teenagers need community. They require growth that emanates from mentors and peers, not growth driven by training plan design or workout structure. So, to steer youth in the right direction, we should be steering them toward group training, peer groups (if available) and old, grizzled veterans who they can learn from, not coaches and trainers who focus on putting the X’s and O’s on paper.

That being said, there’s no reason teenagers can’t be successful training for an ultramarathon on as little as six or eight hours of running per week. This is in line with any other after school sport activity, and represents a healthy balance for sport and the rest of a busy teenager’s life. This is also conducive to long-term health as we know that teenagers with a moderate amount of consistent exercise live longer, healthier lives and establish habits that are good for their overall well-being.

How frequently should teens run ultramarathons?

This is an area where teenage athletes can learn from their older counterparts. Participating in a race and the subsequent recovery has long-established framework from many adults attempting (and learning from mistakes) the same endeavors year after year. And there’s a lot to be learned. Many athletes feel the emotional effort that they put into a race is the driving factor behind how quickly they can recover. Then, when you combine the emotional toll with overcoming the physical soreness the race imposes, you have a ripe formula for your post-race recovery timeframe. In this regard, teenagers are not going to be a whole lot different. The mixture of physical recovery and psychological recovery will need to come into balance before another ultramarathon should be undertaken. You have to physically feel that your body is ready enough for the next task as well as being psychologically ready to start training again. That’s the case with adults and there’s no reason to believe it shouldn’t be the case for teenagers.

I chose the words for the title of this latest section deliberately. Intentionally omitted was the word “compete.” All too often, we think of things that have a start line, a finish line and timing mats as being a competition similar to a tennis match or swim meet. In these prototypical competitions, individuals or teams of people go head-to-head and duke it out until the final buzzer sounds. Each individual or team is completely expended by the end of the event, normally hallmarked by copious amounts of sweat pooled on the competition floor and limp bodies strewn about. But ultramarathon running does not have to be that way. As I mentioned at the beginning of this article, teenagers can partake in ultramarathons for a variety of reasons. And just because it’s a “race” does not mean that every last ounce of physical energy needs to be expended. Therefore, this question can be answered primarily by the type of emphasis that the teenager is putting on the event, be it competitive, exploratory, fun or otherwise.

As a coach, I have been asked by many parents and race directors if these activities are appropriate for their children. And my answer has always been consistent. If a 12- or 18-year-old wants to run an ultramarathon and it gives them joy and provides a boost of self-confidence, then by all means, let them go for it. During the process, they should be reasonable with their training, look for training groups in their area and not let the training dictate the rest of their life. Given a reasonable amount of preparation with a focus on the race that centers around fun, challenge and enjoyment, there’s little-to-no long-term detriment and a whole lot of growth and development that will pay dividends in their adult lives.

We have all seen how traditional sports can impact a young person’s life. Sports can teach us how to be disciplined, how to play well with others and humbly accept defeat. Ultramarathon running can serve these purposes as well, provided that the right context is put on the event and they understand how to prepare for it.

We shouldn’t fear teenagers wanting to participate in ultramarathons. In fact, we should embrace it as a a positive force for the development of that individual and the growth of the sport overall. Yes, there need to be guidelines and boundaries just like any sport, but there’s no reason that teenagers can’t participate and thrive in the sport of ultrarunning given a reasonable, practical and balanced approach inside and outside of the sport.

Jason Koop is the author of Training Essentials for Ultrarunning and Coaching Director for CTS. Over his 15-year career as a coach he has worked with novice, age-group and elite ultrarunners, including Kaci Lickteig, Timothy Olson and Dylan Bowman. As Coaching Director, Jason oversees the performance and continuing education of more than 50 coaches. For information on CTS coaching and training camps, visit trainright.com.