Hazen and Lickteig named #10 2018 UltraRunners of the Year 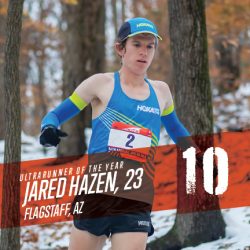 Jared Hazen was voted in at number 10 in the Ultrarunner of the Year balloting. Originally from Titusville, Pennsylvania, Hazen won the JFK 50 in November, posting the second fastest time in the 57-year history of the race despite muddy conditions. He also placed second at the Lake Sonoma 50, earning a Golden Ticket to Western States. Unfortunately, an injury prevented him from running. He currently lives in Flagstaff, Arizona. Photo: Geoff Baker 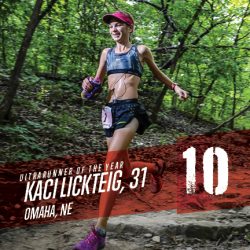 Kaci Lickteig checks in at 10th place for the women. After an injury plagued 2017, Lickteig returned to form, winning four ultras and placing second at JFK 50. As 2016 Ultrarunner of the Year, the “Pixie Ninja” placed 10th at UTMB. Lickteig is a physical therapist based in Omaha. Photo: Mile 90 Photography