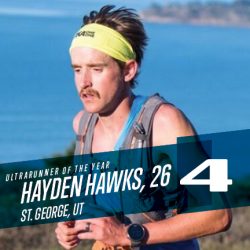 Hayden Hawks of St. George, Utah checks in as the number 4 ranked man for 2017. Hawks strong year included a win at Courmayeur-Champex-Chamonix (CCC), the 100K race in the UTMB series. He also won the Red Hot Moab 55K, placed second at Chuckanut and third at The North Face Endurance Challenge Championships in San Francisco. Hawks took to the trails after a stellar track career at Southern Utah University, where he posted school records in the 5000 meters (13:51) and 10,000 meters (28:53). Photo: Strava 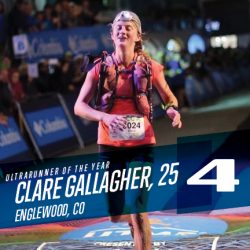 Clare Gallagher burst onto the ultra scene in a big way this year after a surprise win at the Leadville Trail 100 in her first 100 mile race in 2016. Gallagher, who ran track and cross-country for Princeton University, won the Courmayeur-Champex-Chamonix (CCC) 100K in Europe, setting a course record in the process. She also placed second at the Black Canyon 100K in Arizona and The North Face Endurance Challenge Championships in San Francisco. A native of Englewood, Colorado, she currently works as a tutor in the Boulder area. Photo: Kirsten Kortebein

Bradley and Hammond named #5 2017 UltraRunners of the Year

Boulet and Tollefson named #3 2017 UltraRunners of the Year