Bradley and Hammond named #5 2017 UltraRunners of the Year 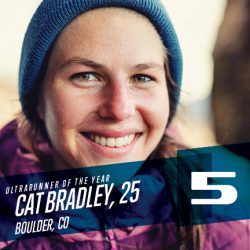 Cat Bradley of Boulder, Colorado is the fifth ranked woman for 2017. Bradley won the prestigious Western States 100 in her debut race there. She excelled on the Western States course, winning both the “big dance” and The Canyons 100K. She burst into the elite ranks in late 2016 with a course record win at the Rio del Lago 100. A kindergarten teacher who was laid off in March, Bradley took full advantage of the extra time to train and good fortune – she got into Western States via the lottery, with only one ticket and a 2.5% chance of getting drawn. Photo: Aaron Colussi 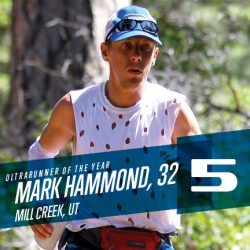 Mark Hammond is the fifth ranked man for 2017. Hammond had a banner year with ten ultra finishes, placing third at Western States and second at Run Rabbit Run 100. He lives in East Millcreek, Utah, where he works as a mapping technician for RedCastle Resources, a company that provides geospatial and information technology support to natural resource management agencies. He is getting married today (January 13) to Annie Dees! Photo: John Medinger

Leblond and Cusick named #6 2017 UltraRunners of the Year

Your Share features are not working. I stopped sharing the UROY at #6, #5, #4 and the rest. Can you fix?

Give it another shot, I think facebook cached an old version of the page.