Bowman and Wolf named #4 2018 UltraRunners of the Year 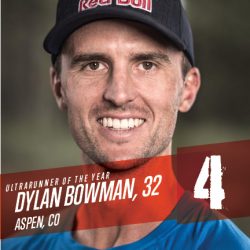 Dylan Bowman is ranked fourth in the Ultra Runner of the Year balloting for 2018. “DBo” had an outstanding year, winning two major international races, Ultra Trail Mt. Fuji in Japan and Tarawera 100K in New Zealand. He also placed a very close second at Sur les Traces des Ducs de Savoie (TDS), the 119km race in the UTMB series. In what was almost certainly the most thrilling race finish of 2018, Bowman finished a minute and two seconds behind the winner, and 41 seconds ahead of third place after more than 13 hours of racing (and two lead changes in the last five miles). After several years of living in the San Francisco Bay Area, he and his wife Harmony moved to Aspen, Colorado during the year. Photo: Red Bull 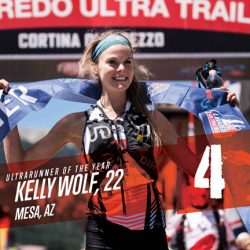 Kelly Wolf is the fourth place woman for 2018. Wolf had a breakthrough year, winning both the rugged Lavaredo Ultra Trail 120km in Italy and the runnable Tarawera 100km in New Zealand. She also placed highly against top-flight international competition with a third at Transvulcania 73km in Spain and fourth at Ultra Trail Cape Town 100km in South Africa. Originally from Tempe, Arizona, Wolf currently lives in Telluride, Colorado, where she is a part-time gymnastics instructor. Photo Jordi Saragossa

Awesome! Two of my favourite runners, hopefully they both have great 2019’s as well.