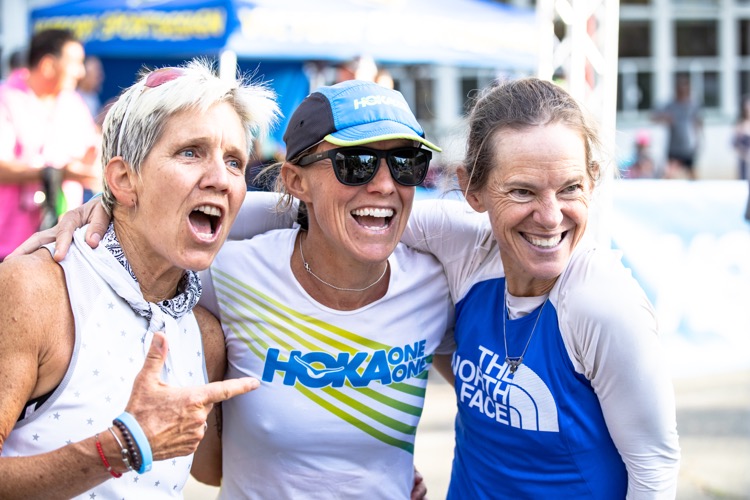 All Heart: An Interview with Meghan Canfield and Pam Smith

Last month’s column, “What Happened to My Body,” was all about menopause physiology and the physical changes that come as estrogen levels decline. This month, I leave the books behind and dive into “Heart.” Heart is my sacred space, built through training, knowing my “why” and connection. It is vulnerable and courageous space, where I reach out to running partners and dare to talk about menopause, slowing down and aging. Heart is the place I remind myself that pace and PRs are metrics, not measures of self-worth.

Meghan Canfield and Pam Smith exemplify “Heart.” The two are friends, running partners, teammates and competitors, and both women have long and outstanding ultrarunning pedigrees.

Meghan has 26 first-place finishes, 10 top-10 finishes at Western States, is a nine-time member of the US 100K team and holds two world and eight American age group records. She also qualified and competed in four US Olympic Marathon Trials, and was the oldest competitor at the 2012 Trials at the age of 52.

Pam has 34 first-place finishes, including Western States, has second and third-place finishes at Badwater, and is an eight-time member of the US 24-hour and 100K teams. 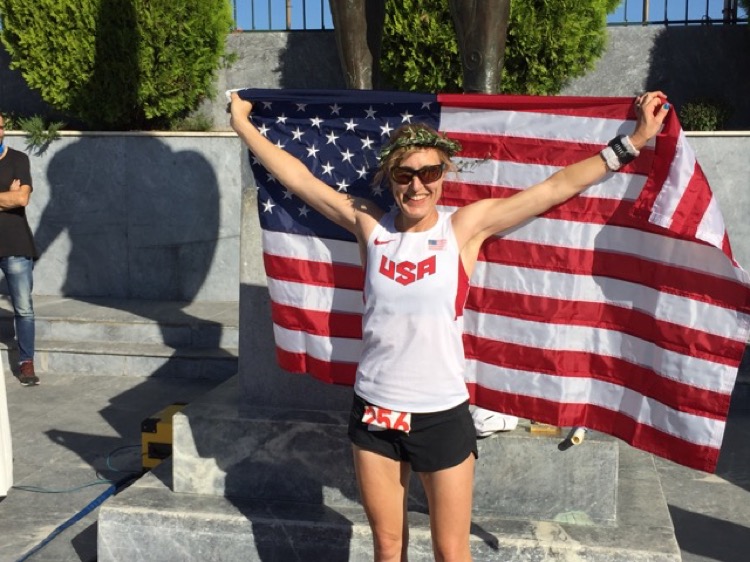 Pam Smith is an eight-time member of the US 24-hour and 100K teams.

I sat down with Meghan Canfield and Pam Smith for a conversation about menopause, aging and the frustration of slowing pace.

Every woman goes through this, yet we rarely discuss how perimenopause and menopause affect running and racing. At ages 61 and 47, how are each of you experiencing the menopause transition?

Meghan: Last summer, I just sort of fell off a cliff. Running wasn’t fun. I had no energy. I couldn’t run up a hill. Menopause Hormone Therapy (MHT) actually helped me feel like a more normal human being again. And I still don’t know if the 100K World Championship was where I was in terms of coming back and being on hormone therapy, or my training. Making it through the 50M, my record for the age group was way slower than I imagined it would be. But then when I did the Mary’s Peak 50M, that went really well. I felt like I metered it out pretty perfectly. And I recovered pretty well.

Pam: I am actually perimenopausal, still menstruating, but definitely things have changed. I used to be a regular 33-day-cycle person. It’s gone down to like 28, which I know is normal for a lot of women, but it is a change for me, and that’s one of the things they talk about is shortened cycle.

I think there is a component of denial—it is still off a few more years. I am not there yet. I remember when I felt terrible for a while and my husband was like, “Well maybe you are starting perimenopause,” and I was like, “Shut up! You are banned to the couch tonight.” And then it was like hmm, maybe I should be considering that.

I was quite angry at the suggestion that hormones were the problem. It is, I think, the corollary of when women are angry or when they have some problem and people say “Oh, are you on your period?” It wasn’t what I wanted to hear.

What’s been the trajectory since then?

Pam: Oh, I definitely went through the whole thing of the low motivation as you mentioned, kind of feeling like, why today? COVID racing wasn’t really happening either, so there was a sense of “Why do I need to train?” And then I’d go out for a run not feeling good, feeling like trudging through at a pace that is way slower than I used to run but it feels like more effort. I used to love to run up the hills, too, but I don’t really like them as much as I used to. We could just walk. Let’s just walk more. That would be nice. It’s a feeling of working like you used to work, same sort of effort level, and then you look at your watch and think, “What just happened?” It didn’t feel like I slowed down that much, but the Garmin doesn’t lie.

Pam: I feel like the endurance is there. It is easier to go out and go for a long run and do whatever I want. It might take 6 or 8 hours, but I can still do that. 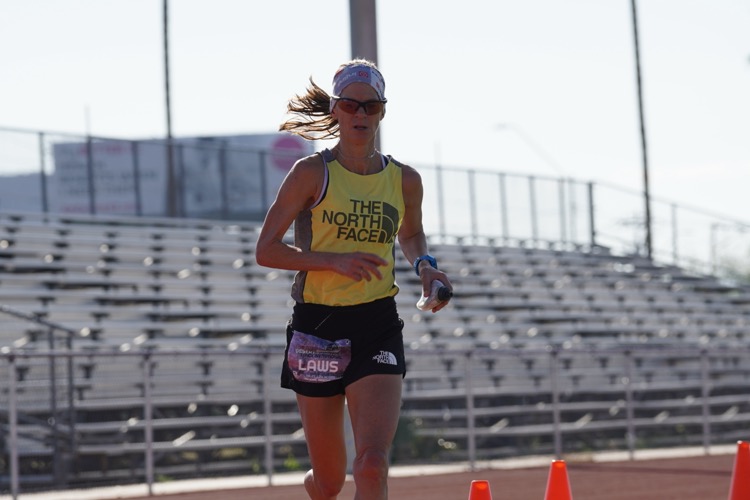 Have either of you done bone density scanning?

Meghan: Yes, I have. I have osteoporosis of my lumbar spine, which is not surprising because I had osteopenia all my life as far as I know. Every bone density scan I had osteopenia, and my Nurse Practioner used to worry about it but said, “I am not worried about you anymore” because nothing was changing. I was continuing to run mega-miles, never had a stress fracture and I was having regular periods at that point. But my grandmother had osteoporosis pretty severely. She fell down and shattered her ankle—that’s how brittle she was.

My mother, when she went through menopause, was offered MHT, which she did. And then, after she got through everything, she said, “Ok, I’ll go off of it now,” and the doctor said, “Your bone density is probably going to tank.” And so, she went off it, had a bone scan a few years later, and she had osteoporosis. And so, she went on Raloxifene. She did that and calcium and she is also on MHT. Two years later, her bone density went back up. When I got my osteoporosis diagnosis—we have the same family doctor—he put me on the same thing.

And you plan to continue MHT long term?

Meghan: Yes, absolutely. Quality of life. And I would give up racing. It is a banned substance. I have a therapeutic use exemption for estrogen. If they did not give it to me, I would stop racing and just run, because it is not worth the risk. There is no cure for aging, but I can at least mitigate these symptoms of low estrogen and have a more gradual process of bone loss.

Both of you have been racing for a while now. What’s kept you inspired and what’s brought you the most joy?

Meghan: I like to race. I love the events. I love the community, and I love to push myself and see what I can do. Most of it now is social, being around people and at my age, I do tend to still inspire people and that is motivating for me. It’s fun to be a 61-year-old woman and win a race. It didn’t matter how big or small it was, I fuckin’ won a race!

Pam: I have to admit I am having a hard time with the motivation piece of it. I think because as runners, one of the things that motivates us, motivates a lot of people, is this idea that you can always do it a little bit better, you can get better. We know our PRs, and we want to improve our PRs. What if you know definitively that you will never be better than you were? And that’s where it’s like ugh, so then what are you working for? You are working to be 90% of what you used to do, 80% of what you used to be.

Which is just fuckin’ hard. I don’t want to embrace it.

Meghan: It’s a blow to the ego to slow down. There was a lot of identity to podiums and records. I just did a podcast for Trail Runner Nation. People say to me, “But you’re still getting faster.” I am not getting faster.

Pam: I think people want to be positive and encouraging. That’s great, and it’s a nice place to be, but at some point, it’s like, “You are not listening to me. You are not hearing where I actually am.” People say, “Oh this is just a phase. Oh, you’ll be fine, you just need to do x, y, and z and your running will be fine.” No. Like you said, I can’t stop this aging process and I feel otherwise fine. I’m currently not injured. I don’t have a health issue. I’m just in this place now. In the grand scheme of things, I’m fine, but I’m not going to get back to that place and you saying it feels dismissive. 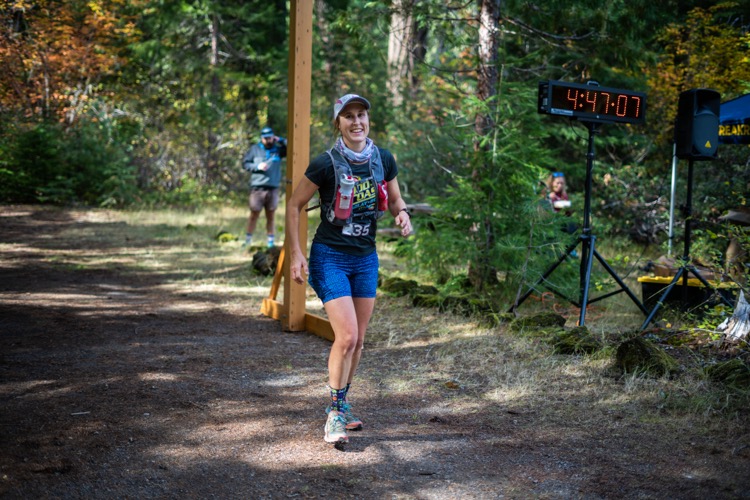 Do you have a trail or space you run, when it’s just been a rough day?

Pam: Mine’s actually not a physical place. Mine is actually calling people up. Somehow, when running sucks—and I have those days—at least I am with somebody else. I need somebody else there. And having that person somehow helps me to get through the run and also helps me to feel that there is a positive side to feeling like crap all day. “I felt like crap, but look, I got to have fun with this person.”

Meghan: I have to agree with that. Adventuring with Pam, that was really fun. That was a great day. All of it was easier because we had each other. We were just talking. You don’t notice as much when you are chatting away. And honestly, the other thing that gives me a lot of joy with running is with my dogs, when I let them off leash. One friend said, “It’s like watching a baby laugh.”

Is there a thought or an idea you would like to leave with people?

Pam: I guess I am in the midst of it, so it is in some way, advice to myself. It’s kind of, “You’ve got to accept this.” I was in the denial phase. It is coming. I think being able to—whatever that plan is—whether it means you stop running and become a knitter or you like gardening or coaching, finding some place where you can then take your next step of life and find some joy in that. Being able to move forward in some way, find something where you find your joy, whether it is running in a different form or whatever.

Meghan: My message actually came from someone else because I was moaning about being slower and trying hard and feeling tired, and she said, “Just give yourself some grace.” And that was really powerful because no one else was criticizing me. No one else was saying, “You suck.” No one else was complaining, just me.

Just do that. Give yourself some grace.