2019 Performances of the Year

Camille Herron’s 24-hour world record is the 2019 UltraRunning Performance of the Year. 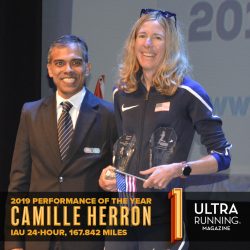 Camille Herron of Alamosa, Colorado, broke her own world record for 24 hours while winning the IAU 24 Hour World Championship in Albi, France. Herron’s total of 167.842 miles broke her 2018 record of 162.91 also set at the IAU Worlds. Herron received 30 first place votes from the 37 voters on the panel.

Courtney Dauwalter’s UTMB win was second in the voting, and received four first-place votes. Clare Gallagher’s Western States win was third; her time of 17:23:25 was the second-fastest time in the history of the race, trailing only Ellie Greenwood’s 16:47:19 course record.

Jim Walmsley’s Western States course record is the 2019 UltraRunning Performance of the Year. 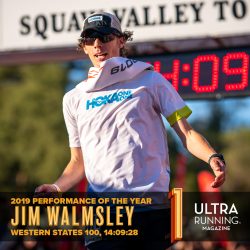 Jim Walmsley of Flagstaff, Arizona, broke his own course record at the venerable Western States 100 to win the UltraRunning Performance of the Year. Walmsley’s time of 14:09:28 was more than 20 minutes faster than his 2018 course record.

Walmsley edged fellow Arizonan Zach Bitter by the narrowest of margins for the award. Bitter’s world record of 11:19:13 for 100 miles at the Six Days in the Dome event was second. Bitter’s time broke the old record of 11:28:03 by Russia’s Oleg Kharitonov, set in 2002.

Jared Hazen’s second place finish of 14:26:46 at Western States (also under the previous course record) was fourth in the voting. This was the highest UPOY placing ever for a non-winning performance.

Patrick Reagan rounded out the top five with a 12:21:43 win at the Brazos Bend 100-miler. – John Medinger Photo: Paul Nelson