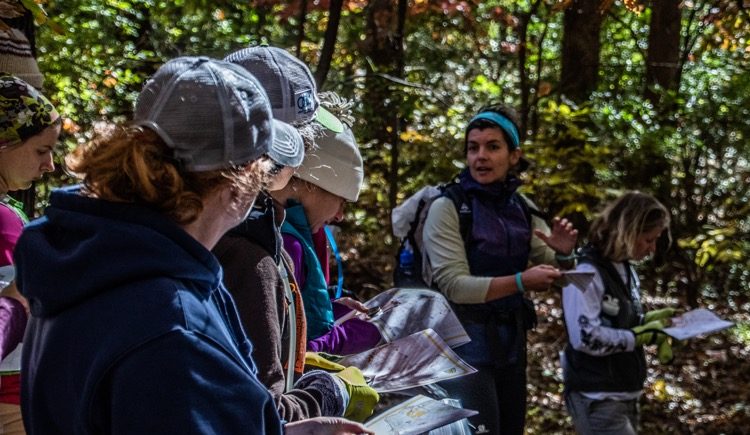 The push to get more women outside has never been stronger. REI Co-op committed the entire year of 2017 to promoting gender equality in the outdoors. And last July, Outdoor Retailer, the largest outdoor recreation expo in the U.S., presented the keynote, “For All Women: From Backcountry to Boardroom” to its 30,000 attendees.

Still, being a female athlete in the ultrarunning world, the gender imbalance is obvious. I asked myself, what could one person do to address this issue? The answer came when I decided to momentarily shift my focus from hosting races to create the STL Women’s Trail Summit in October 2018. The idea was to produce a judgement-free, non-competitive event where female runners could celebrate our diversity, embrace our differences and grow together in the sport we love.

The inaugural 24-hour summit was held at Greenfelder County Park, about 20 minutes from downtown St. Louis, Missouri. An amazing group of 35 women attended, with ages ranging from 20-60 and skill levels including veteran ultrarunners to novice athletes. We began with a session on basics skills and techniques for trail running, followed by a women’s clinic featuring registered dietician Kimberly Yawitz. Our discussion was based on understanding female nutritional needs and common health issues many women must overcome while competing in the outdoors. A presentation by Elena Friedman covered the anatomical differences between men and women, and how biomechanics impact running.

A highlight of the 2018 summit was an orienteering session led by recognized local adventure racer Emily Korsch, followed by a group night run. Damsel in Defense representative, Dava Rogers, discussed safety and situational awareness while pursuing activities in the outdoors. Wrapping up the summit was Jennifer Schaller, owner of RunWell – a local running store – as she hosted Trail Running Gear 101 which allowed attendees to get hands on with new gear.

The summit included overnight camping, and we found time to gather around the campfire and share stories of our successes and failures as women, mothers, daughters, athletes and more. As the conversation continued over s’mores well past midnight, it became apparent we are all fighting the same battles as the thirst for gender equality in the outdoors continues.

The STL Women’s Trail Summit will return on October 25-27, 2019. The second annual event will shift to a new location and add even more content as we keep working to move beyond the stereotypes of who and what makes a trail runner and ultrarunner.

More information on the summit can be found at www.stlwomenstrailsummit.weebly.com.