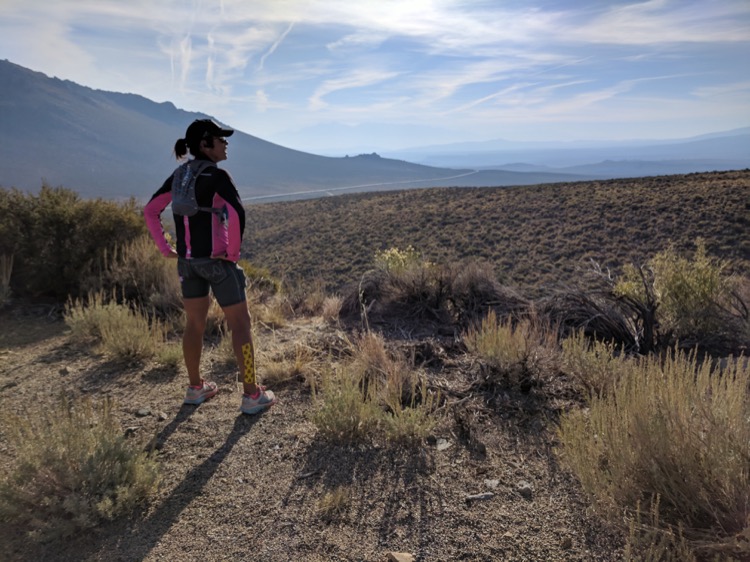 Day 6, California. Sandy stops at an overlook in Inyo National Forest after a close call with a bear in Yosemite. It was the last day she wore a hydration pack; the longer she ran, the less she wanted to carry. By the end of the Transcon, she didn’t carry so much as a gel in her pocket. Photo: Jay Lee.

The mountain Sandra Villines moved was the female world record for the North American transcontinental run. That record had been immovably standing since 1978, when South African Mavis Hutchinson ran from Los Angeles to New York City in 69 days.

Other challenges have been made, but have either been incomplete or lacking some component required by Guinness World Record staff. Though it will be some months before Guinness definitively accepts Sandy’s record, an online community of running detectives at LetsRun.com has already been dissecting Sandy’s data.

There were murmurs before Sandra’s run that she wouldn’t make it, that she wasn’t a sufficient caliber of runner, but the post-run chatter seems respectful, implying that the online sleuths have not found anything out of order.

In fact, Sandy’s team of two was constantly aware of doing everything by the book. From redundant Garmin watches to the Inreach tracker, witness statements, photos and videos, crew chief/CPA Jay Lee made sure that the run was documented in copious detail.

What is perhaps the most intriguing aspect of Sandy’s run is her utter ordinariness. As one LetsRun.com user observed (before Sandy proved him wrong), “You just can’t compare Sandra with a world-class runner like Pete Kostelnick,” the men’s Transcon record holder.

Exactly. Sandy works a regular job as a district manager at Walgreen’s, has no hefty corporate sponsors that allow her to train full time and scored no big wins at prominent races until Badwater just this year. Like many runners, she began overweight, but once committed, set goals and methodically ticked the boxes: half marathon, marathon, ultra, ultra in the desert, ultra across the country… she’s not sure what comes next. 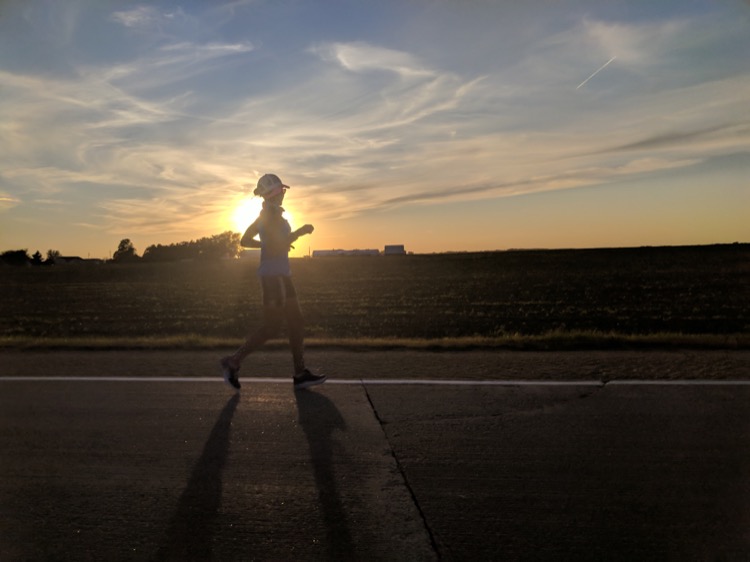 Day 38, Iowa. Cruising alone through the sunset after a pleasant day running with the Camachi Cross-Country team. Photo: Jay Lee.

Imagine the face of her doctor when she went in for a physical after finishing the Transcon: “You’ve been doing WHAT for the last two months?” Amazingly, she is in fine shape, except an indefinable “skeleton ache,” a warning to not get back to running just yet. Her only other symptom is road nightmares, waking up feverish that she should be out on the road, clocking off more miles.

Sandra is humble, unaccustomed to talking about herself. Thus her world record-breaking Transcon risks slipping through the media cracks, for lack of anyone tooting the horn.

That would be a shame. If ever young people needed to believe in themselves, to set and achieve their goals, to forge ahead even when the tongues of the doubting nabobs wag… it’s now.

And that is precisely what Sandra had in mind. She believes that young people, especially, need to know that their dreams are not silly, that hard work produces results. Sandy speaks of patience as a necessary virtue, the acceptance of the small steps that add up to something huge. In the digital age of two second attention spans, she is modelling something rare, especially for kids: the acceptance of a long journey to reach a goal. 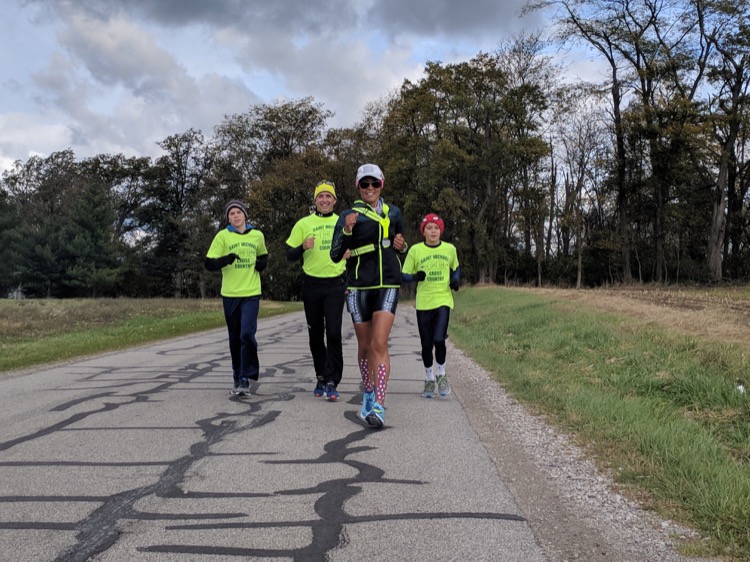 Day 45, Iowa. Sandra is joined by St. Michael’s Defenders Cross-Country team, led by Coach Bryan Perkins. Although Sandy didn’t know it at the time, Perkins’ mother had died on that date, in the line of duty as a firefighter. Perkins was remembering his mother and running with Sandy was a connection to the strength of his mom. He left a beautiful letter for Sandy. Photo: Jay Lee.

In Sandy’s case, the goal was rather anti-climactic. She arrived in New York City in the middle of the night preceding the New York City Marathon, needing to finish before crowds filled the streets. Guinness regulations require a Transcon to finish on City Hall steps, but since New York locks the gates around City Hall over the weekend, an unhappy security guard granted her access to the steps just long enough to secure the finish.

At City Hall, she was spared the gruel of microphones thrust in her face, because, well, there weren’t any microphones. And no cameras to record that, after travelling 3,127 miles without a single fall, she tripped getting up into the RV for the last time.

But that’s ultrarunning. Even the best of our elites do not get much attention. Nevertheless, the deed is done: Sandra Villines ran across the country and set a new record. And now others will be tilting at that record. Pam Reed, legendary in ultrarunning, is preparing for a February start on the southern route, trying to beat Sandra’s record of 54:16:24. 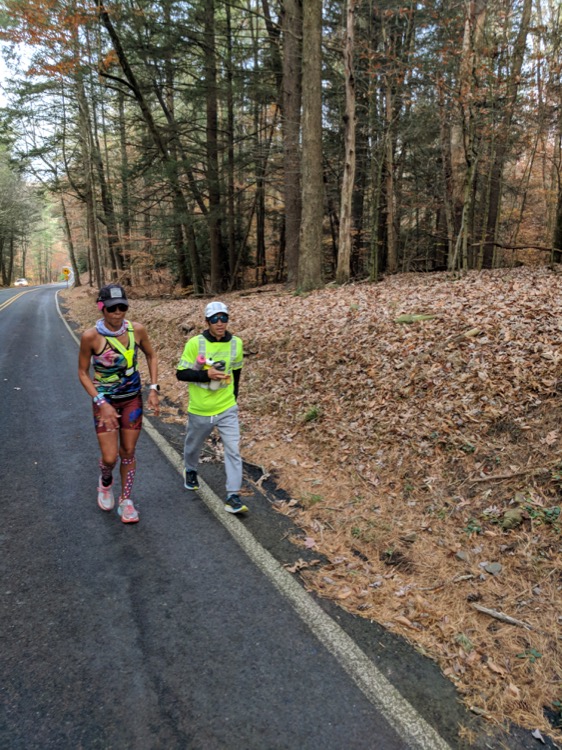 Day 52, Pennsylvania. A typical crewing transaction. The Toyota Yaris is parked way back on the road. Crewman Jay Lee has run forward with Huma gels, banana, electrolytes, tissue, anticipating what Sandy might need. Afterwards, Jay would run back to the car and drive forward to do it all again, about 100 times per day. Photo: Larry Grogin.

Ultrarunning may be the ultimate in solitary sports, but it’s also highly communal. Sandy’s record is a triumph for us all, media hype or not, because pushing limits is what we’re about. We all register for journeys that may be too much for us, then we throw ourselves into the unknown to see if we can make it. It’s that willing detachment from certainty that defines us as ultrarunners.

Sandy has given us a fresh picture of that detachment, in her minimal (even skeletal) crew, her budget-minded preparations ($1.50 rain ponchos) and her graceful acceptance of crickets at the finish.

She shows us that simple desire and determination are enough to get the job done.

Lessons from the Wingman
Jay Lee was Sandra Villines’ one-man road crew for 54 days, navigating, monitoring safety and weather, and supplying nutrition and hydration. On an average day, he got in and out of the car over 100 times. These aren’t the ordinary logistics of crewing an ultra, but after this Olympics of crewing, surely the Wingman has some suggestions for the rest of us?

I follow both of them on Strava and every day seeing the pics from Sandra and Jay who live in my area was just awe inspiring. Regular people running. Amazing

Extremely motivating. As someone leaving March 18, 2018 on a very similar route, east to west, her effort was simply amazing. I plan to go a lot slower to raise money to prevent and treat child abuse as https://run2heal.org and the experiences captured in the article give me goosebumps. Congratulations, Sandy V. The women in our UR community never cease to amaze me.