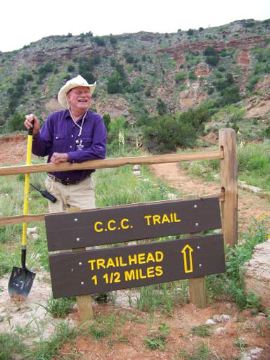 Spicer was born June 1, 1932, in Wilkes County, N.C. He had lived in Amarillo since 1960. In no particular order, Spicer was a bootlegger, a military policeman,
a romantic, a poet, an ultra-runner, owner of a pest control service, a storyteller, an undying Dallas Cowboys fan, a philosopher, a father, a practical jokester, a
developer, and the conscience of Palo Duro Canyon.

Spicer was well known for his raconteur’s wit and wry humor. He was author of one of ultra-running’s most famous quotes. Recounting the latter stages of his run
at the Wasatch Front 100 in 1986, Spicer said, “I hammered down the trail, passing rocks and trees like they were standing still.”

His philosophy is neatly summed up in a plaque he presented to friends Bill and Wynn Ross, which reads: “Life is a headlong rush into the unknown. We can
hunker down and hope nothing hits us or we can stand tall, lean into the wind and say, ‘Bring it on, darlin’, and don’t be stingy with the jalapeños.’”

If Spicer was not in the company of friends, he was working alone at Palo Duro Canyon. Over the last 25 years, he spent more than 22,000 hours, or 2,750 working
days, building miles of running and hiking trails in the Canyon where there had been none.

Jon Mark Beilue of amarillo.com contributed to this report.