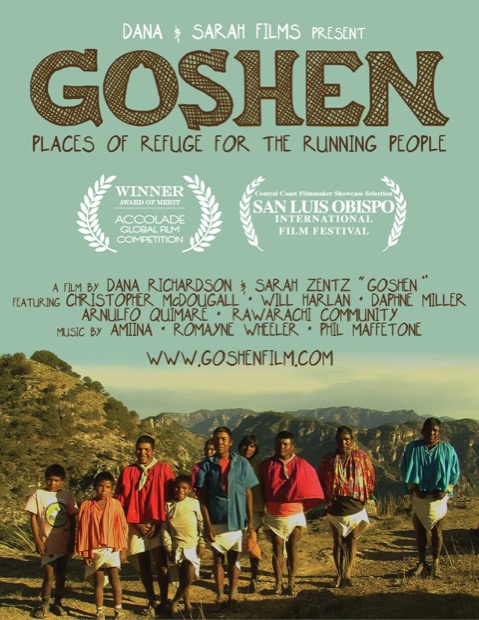 On April 4, Dana & Sarah Films premiered their award winning documentary GOSHEN: Places of Refuge for the Running People. The powerful film is an entertaining and educational account of the plant-based diet and athletic endurance of the Tarahumara running tribe. The Tarahumara, a light-footed indigenous people who live in the remote depths of Mexico’s Copper Canyons, are renowned globally for their ability to run long distances. They are also know for their low risk of the top killers in modernized society – type 2 diabetes, heart disease and cancer – which is credited primarily to their plant based diet and active lifestyle. The filmmakers share an eye opening investigation of the Tarahumara people’s diet, ultra-running endurance, and minimal footwear.

“The Tarahumara have never strayed from the fact that we are running people” says Christopher McDougall, author of Born to Run, who is featured in the documentary.

However, the recent rise of drug violence and famine, due to severe drought, is severely impacting their way of life and ancient culture.

“Recently, some of their traditional races have been lost because they don’t have the calories to run for hundreds of miles” says Will Harlan, a cast member of GOSHEN and a winner of the Caballo Ultra Marathon. Harlan responded to the Tarahumara drought and famine crisis by co-founding Barefoot Seeds, a non-profit Tarahumara native seed bank in Urique, Mexico. With the aid of Native Seeds/SEARCH in Tucson, Arizona, Barefoot Seeds was able to repatriate Tarahumara native seed varieties that were endangered due to drought.

“Our films seek to bring awareness to current social issues not represented in mainstream media. Furthermore, our goal is to share solutions to the problems at hand” says Richardson. “Our hope is that GOSHEN will inspire people to take part in preserving the native seeds and running traditions of the Tarahumara” adds Zentz.

In March 2015, two years after the women filmmakers traveled to the Copper Canyons, Dana & Sarah Films won a prestigious Award of Merit for Women Filmmakers from The Accolade Global Film Competition. The award was given for their exceptional documentary GOSHEN.