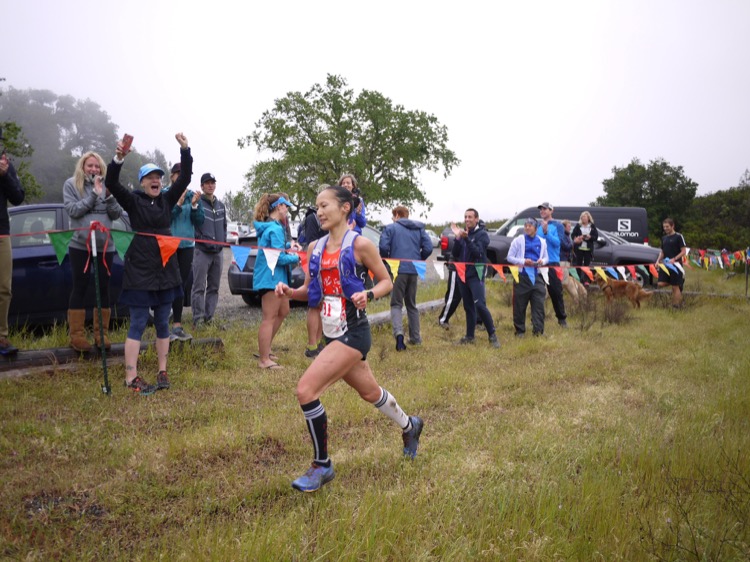 Over the weekend, YiOu Wang raced to the win at the highly competitive Lake Sonoma 50 Mile in 7:14:45—the second fastest ever at Lake Sonoma.  Wang resides in San Anselmo, CA, where she is the 7th and 8th grade teacher as well as the Dean of Curriculum at GATE Academy in San Rafael, CA. YiOu was first inspired to run in order to train for the Boston Marathon while attending MIT, working her way to qualify for the 2006 event. She qualified for the 2012 Olympic Trials Marathon with a PR of 2:38. Boosted by the beautiful trails of Marin County and the San Francisco Running Company training group, Wang has ventured into trail and ultrarunning in the last few years.

Quick & Dirty: Congrats on a big win (and first 50-mile finish!) at Lake Sonoma 50. You faced some stiff competition from Kaci Lickteig, Camille Herron, and several other strong women. Herron in particular is known for racing pretty aggressively, and she had not yet lost an ultramarathon. What were your mindset and expectations going into the race against these ladies? What strategy did you seek to employ?

YiOu Wang: My mindset going into Lake Sonoma was to stay patient, maintain a sustainable effort level and trust my training. I wanted to first and foremost finish and finish feeling strong. I put in a very consistent and solid block of training leading up the Lake Sonoma so I was confident I could post a competitive race as long as I was patient in the first half.

I knew Camille would go out fast and given the first two miles of the course are on road it is very easy to get drawn into a quick pace. Before the race started I already made peace with letting anyone go out ahead of me and to focus instead on my own effort level. I didn’t know if Kaci, Caitlin, Emily or Anna Mae would push the pace early but I resolved to not pay attention to what other racers did in the first several miles. My mantra for the first part of the race was to run at a level that was comfortable for me and to see where everyone was at the turn-around point before making any moves.

When I learned that I was making up time on Camille from Madrone Point to the turn around I knew I could catch her on the next big climb. Once I could see Camille in front of me going up the climb to mile 30 I wanted to pass her and push on in the lead.

The last 15 miles were uncharted territory and I told myself to just keep running, I thought about all the times I felt tired going into a training run and told myself it’s only a Lakes Loop (a route I frequently run in Marin) to the finish.

Q&D: Did everything go to plan in the race itself? What was most difficult for you?

YW: Overall the race went almost completely as I envisioned it. That almost never happens, but I think it speaks to my intense focus on running my own race. I tried a new fueling strategy, which was programming my watch to beep every 20 minutes and taking 2 salt pills as well as a Gu every time my watch beeped. It helped give me something routine to do and took a lot of the thought out of fueling. I never felt low on energy during the entire race.

The most difficult part for me was how many miles I ran alone, especially after mile 39. The twisting trails on a large portion of the course make it impossible to see anyone in front and I found myself slowing down at times and losing motivation to push hard. I have to work on developing a mental strategy beyond singing the same song chorus in my head to keep myself on pace.

Q&D: You mentioned in a post-race interview that you were unsure of whether you’d take your Western States Golden Ticket you earned by winning. Are you going to think on it for a week or two? What is factoring into to your decision?

YW: I honestly didn’t go into Lake Sonoma chasing the Golden Ticket. My goals were to finish, race well, try to win and get the spot on the IAU World Trail Championships team [in Geres, Portugal in late October]. I knew the Golden Ticket would also be available but I decided to not think about it at all leading up to the race and use the two week grace period to consider it.

I am going to think about whether I can mentally commit to training for and running 100 miles, how I recover from Lake Sonoma given it’s the first time I’ve run 50 miles, and how Western States fits into my long-term goals. Western States is an incredible event that deserves my complete respect and adequate preparation.

Q&D: You’ve been working with coach Mario Fraioli this year. What’s it like to have a coach, and how has it benefitted you?

YW: Having a coach makes me accountable to someone other than myself. When I’m running on my own plan I don’t do a good job of long range planning and I tend to make rash decisions on races and workouts. I also talk myself out of workouts. Working with Mario has given me structure in my training as well as a sounding board for how I’m feeling. He made sure I was prepared for Lake Sonoma with the right types of runs and workouts while accommodating how I like to run. Leading up to Lake Sonoma I had my most consistent block of training since I ran my marathon PR back in 2011 (when I was working with a different coach). Even on days I was feeling sluggish and wanted to bail I told myself “You’re doing this for Mario!” It’s just a motivation that works well for me.

Q&D: You ran a 2:38 marathon in 2011 to quality for the Olympic Trials. Do you still have plans to pursue the marathon at all, or are you squarely in the ultra/trail world now? What other big goals or race plans do you have in the coming years?

YW: I don’t have any immediate plans to pursue the marathon. I spent several years working towards the goal of making the Olympic Trials and I thoroughly enjoyed the process. Currently, the marathon just doesn’t excite me the way that trails and mountains do. I still love running fast on the roads and I will do more road races from the half marathon down, but the grind of marathon training isn’t appealing to me at this time. Being out on the trails and in nature brings me more joy and satisfaction.

In June I will either be running the Broken Arrow Skyrace or Western States. I am very excited to go to my first World Championship event in Portugal in October and I also want to get redemption at The North Face 50, but I’m not sure if I will do it this winter.

I also have some adventure plans this year. Emily Peterson and I are going to explore the Wonderland Trail and I will be going to Chamonix in August and running parts of the UTMB course. I don’t have plans to run UTMB, my husband and I love the area and we love spending time there.