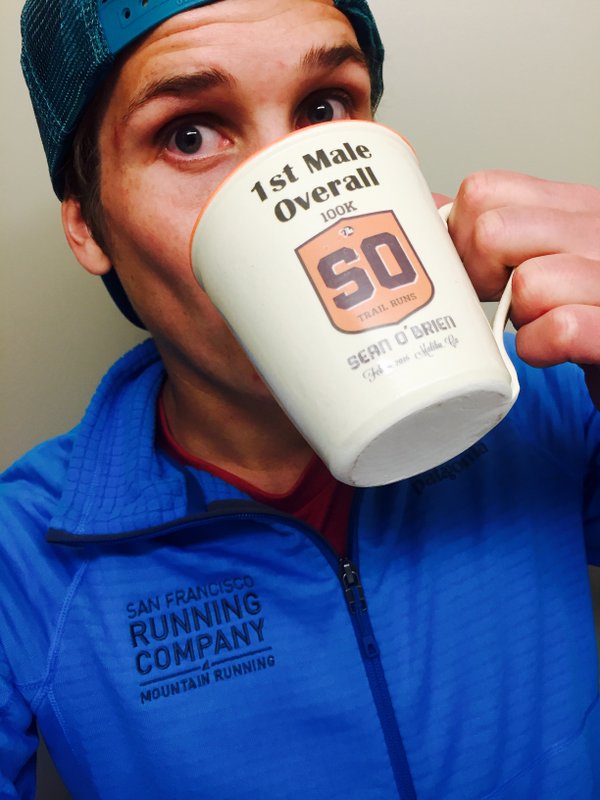 With a big win at the Sean O’Brien 100K last weekend, Stephen Wassather punched a ticket to return to the Western States 100 Mile. The 25-year-old runner, who lives and trains in Marin, CA, says, “I want to take more chances this year [at States] and really see what I’m capable of.” He only started running in 2010 to keep in shape, but he immediately found his way into ultramarathons. Six years on, Stephen says, “I’m still hooked!” Read on to find out Wassather’s thoughts on his recent victory, what his training looks like, and his favorite training run ever (hint: it involved a high level of stoke!).

Quick & Dirty: Some people might be surprised by your win last weekend, likely the biggest of your career. But I recall a passage from a John L. Parker Jr. novel that submits that there are no surprises in distance running. Like a coal-burning locomotive, if you were paying attention, you could see it coming from a long way out. Looking at your past results, that’s the impression I get. You’ve steadily improved for the five years you’ve been running ultras. In logging almost 30 ultras since age 20, you’ve racked up a number of wins in smaller events, but you’ve really hit your stride in the last year. You finished 18th in your Western States debut in 2015 and finished 4th at last month’s Bandera 100K, narrowly missing a Golden Ticket to return to WS100. Was last weekend’s Sean O’Brien 100K (SOB) always in your plan, or was it a late addition after missing the qualifier at Bandera?

Stephen Wassather: First off, fantastic book! My biggest limitation has been a lack of confidence, coupled with a self-imposed pressure to succeed. This past year, though, I’ve really focused on staying grounded in the process of running instead of the outcome, which has allowed me to have more fun and success in training and racing. SOB was pretty last minute; I ended up booking flight and hotel arrangements two weeks before the race. My original plan had been to run Black Canyon 100K, but after some gentle prodding from my girlfriend and Jorge Maravilla, we decided the big climbs and runnable descents of SOB would better suit me. Returning to States was my sole focus for the early season, and I was determined to make it happen in Malibu.

Q&D: How did the race progress for you on Saturday? What were the competition, course, and weather like, and how did you manage your own highs and lows?

SW: I approached it with a much more laid-back attitude. A few days before the race, I came down with a cold, which left me feeling less than ideal Saturday morning. I knew it was out of my hands at that point, so I tried to remain positive about the aspects I could control.

The start was a little slower than expected, and I found myself immediately at the front, just a few steps ahead of Jesse Haynes and Dominick Layfield. Having come off a 100k four weeks earlier, I had a good reference point for where my effort should be, so I focused on running relaxed and efficiently. At some point around mile 12 or 13, Jesse and I pulled away from the group and spent the next few miles chatting about upcoming races and getting to know one another, which was an absolute pleasure. It was at the start of a long descent to mile 23 where I opened my stride and gradually created a gap between me and Jesse. Leaving the aid station, I figured I had about a minute on him, so I tried to run most of the four-mile climb up to Zuma Ridge, hoping he might opt to hike some of the steeper sections.

After that, it was just a matter of taking advantage of the downhills and remaining steady on the climbs. At mile 43 we had a super-long descent to the turnaround at Bulldog, which meant we also had a ridiculously long and hot climb out of there. I saw Jesse coming inbound as I was heading up the climb and realized I had an almost eight-minute lead, so I was confident that if I didn’t make any dumb mistakes, I could punch my ticket to States (and maybe even win!). Someone at the finish told me it was 40 degrees warmer than last year, reaching a high of 85, which definitely didn’t make things any easier. Overall, I’m ecstatic with how things turned out, if not even a little surprised. I always remained present and focused on the process.

Q&D: What’s your goal for Western States this year? What lessons did you learn from last year’s race that you could apply this year?

SW: Well, a PR would certainly be nice, but you just never know at that distance. Getting to the finish line is never guaranteed! My ideal day (and dream come true) would be Top 10, which is going to take some serious work. I tend to dilly-dally at aid stations, especially later in races, so I’m going to have be more efficient in that respect. Also, looking back on my splits, I think I was overly cautious on descents, which cost me valuable time. I want to take more chances this year and really see what I’m capable of.

Q&D: You work for the San Francisco Running Company, which is well known for fostering a vibrant trail and ultrarunning community. What do you do at SFRC, and how important has that community been for your development as an ultrarunner?

SW: I wear many hats at SFRC, including working the sales floor, buying product, and helping with the online store when needed. I’ve been in the industry for almost six years, hopping around from shop to shop, but in 2014 my girlfriend and I decided to move to Marin specifically for SFRC and the trail community. Having the opportunity to train and work with some of the best athletes in the world has been instrumental in my development. I can think of five or six men and women who have been Top 10 at States who regularly show up to our Saturday group runs. Being surrounded by that much talent day in and day out is hugely motivating and inspiring to me as an athlete.

Q&D: Do you have a coach or do you write your own training?

SW: Ann Trason coached me for a few months before States last year, but I’ve been writing my own workouts since May of 2015. She was amazing to work with, and I learned a ton, but I didn’t really feel like I was taking full advantage of all my resources in Marin. Now, I just try to ask as many questions as possible and always keep learning! Building up to Bandera, I focused more on turnover, so track and tempo workouts were pretty key, and my weekly mileage hovered between 85-105. With only a few weeks between Bandera and SOB, I needed to get my climbing legs back quickly. For that, my focus shifted to longer hill repeats twice a week with hard downhill efforts to toughen the quads.

Q&D: Despite being relatively young for an ultrarunner (25), you’ve got loads of experience. What first drew you to run ultramarathons, what is one of your favorite experiences to date, and do you anticipate that ultrarunning will be a long-term pursuit for you?

SW: I’ve never thought of myself as a runner. Growing up, I played rugby at Jesuit High School in Sacramento, and in college at UC Santa Cruz I was on the cycling team. After becoming burned out on the bike, I started running to keep in shape, and I was hooked. I ran a few 10k trail races and stumbled upon ultras after reading a Dean Karnazes book. Immediately, I signed up for the Dick Collins 50 Mile, and within a year of first starting to run, I buckled at my first 100 miler in Vermont.

There have been too many noteworthy experiences to name. I’m fortunate enough to work and train with some of the best athletes in the world, most of whom I’ve idealized before moving to Marin. If I had to pick though, doing a 50 mile training run on the Western States course with DBo last year may take the cake. I’m always looking to challenge myself, and ultrarunning is a great outlet for that. I would, however, like to run a marathon at some point and improve my road times across all distances, something I’ve neglected since getting into ultras.