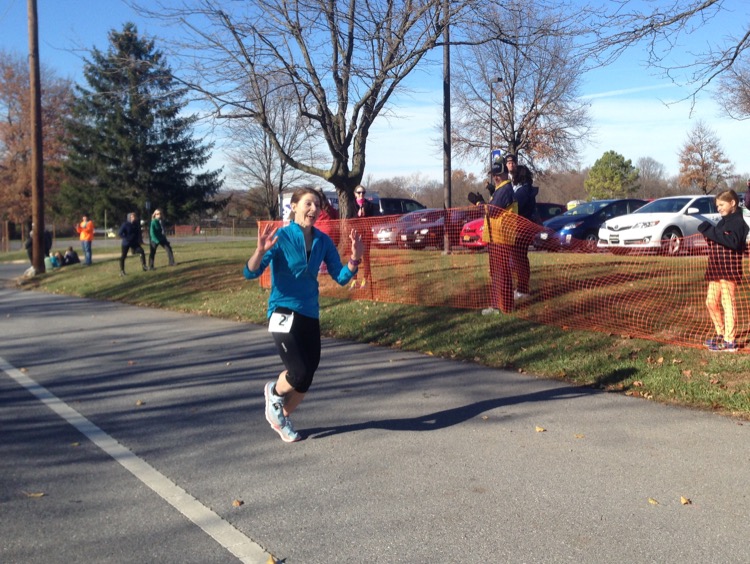 Capping a stellar 2015 ultrarunning season, Sarah Bard recently raced to a repeat victory at the JFK 50 Mile against stiff competition, running an impressive time of 6:31:11. In this interview, she discusses her recent transition to ultrarunning, her JFK win, her other top results and future racing plans.

Quick & Dirty: Defending your JFK 50 Mile title this year, you faced a formidable challenger in 2012 JFK 50 champion Emily Harrison. Men’s 2nd place finisher Graham Peck told me that the night before the race he said to you, only half joking, “I just want to beat Emily Harrison.” And you said, “Me too.” You and Harrison, along with Lorraine Young, were in close proximity on the Appalachian Trail and early stages of the towpath. How did the competition affect your race plan and execution?

Sarah Bard: Haha, I guess I did probably say that. J

I knew my biggest weakness in this race would be on the Appalachian Trail. Even though I did try to spend more time off road this fall, I’m still very much a road runner at heart (and in my coordination skills). With Emily in the race, I knew that this year I’d have to be more aggressive on the trail—last year, I was pretty careful as I really wanted to make it off the AT in good shape to take advantage of the tow path and road. As most people know, Emily is not only an excellent trail runner (she was the runner up at this year’s 50K Trail Championship), but she’s also a speedster (I believe she’s run a 2:32 marathon several years ago, and recently ran in the 2:40 range this spring). Plus, she had run the race a couple times before, so she knew what she was doing. Letting her gain too much on me on the AT would make it hard for me to catch up in the latter portions of the race.

The race played out pretty closely to what I had hoped. I was able to stay close through the trail and then just tried to open it up once I got onto the towpath. I didn’t feel as great as I would have liked in the latter portions of the race. But my watch was a bit wonky and kept reading that I was running 8:30 – 9-minute pace, which might have caused me to go a bit too fast in the early miles on the canal. I’m not sure. I really run these long races off effort, rather than my watch, but I would be lying if I said it wasn’t a bit distracting to see 9-minute pace and feel a bit concerned.

Q&D: Immediately after racing to your repeat victory, you sat in a chair, exhausted, and told me that this one hurt a lot more than the 100K World Championships (in September). What’s your perspective a few days later? How do you feel about your race and your effort?

SB: Coming from running only two marathons a year for several years, this has been a year of change for me. Typically, I’d train for 12-16 weeks, run a goal race, and rest for a month or so. This year, I started trying longer races and increased the frequency of my goal races.

In the spring, I ran the Caumsett 50K and then only a handful of weeks later, I ran the Lake Sonoma 50 Mile. I knew going into Lake Sonoma that I wasn’t where I wanted to be fitness or experience-wise, but I thought I could get through it and at least learn from some of the best ultrarunners out there. Unfortunately, I found myself injured at mile 43, but that race was still incredible and I learned a lot.

I had a good amount of time between Lake Sonoma and Worlds, and with Worlds being a flat road race, I knew that it had the potential to be a great race for me if I was able to get my recovery and training right. Which I think I did.

I really wanted to come back to JFK though, so even though it was only about 10 weeks between Worlds and JFK, I tried to be smart about balancing my recovery while still allowing myself time to train to race JFK well. But, I also had a lot going on in my life outside of running, including a move across the country. I think I was just mentally and physically exhausted, so even though it was super enjoyable and fun, JFK was hard and I was happy to finish and cap off the year!

SB: It was more amazing than I could have expected. I got to spend a week in the Netherlands and I was tapering so it felt like a true vacation! I got to spend time with some amazing runners who I’ve looked up to and only read about in magazines! I made new friends. I got to race a new distance on a course that I felt was well suited to my strengths. AND we WON!

It was surprising how powerful the team aspect of the race was for me. I had a lot of trust and respect for the other women on the U.S. team. Even though I didn’t know any of them very well before arriving in the Netherlands, I knew that they were all tough, gutsy runners, who even on bad days would put forth their best efforts. Even though I had a generally great race experience, there were certainly some rough patches, and thinking about my teammates really helped me stay positive.

I’m glad to see that ultrarunning is making an effort to embrace team-oriented racing more. Even though ultrarunners are already gracious, kind, and quick to offer help or advice, I think team racing adds an important element to post-collegiate running. It encourages friendships and makes you think outside your own personal goals.

Q&D: What are your biggest running goals for next year or two?

SB: Planning is so hard! There are so many great races, but I know I’m still not ready to take on a huge number of them (while still trying to race well). I just signed up for the Comrades Marathon [in South Africa next May], which I’m very excited for. I also qualified to run in the World 100K again next year with my performance in September, so once they announce when/where that is, I’ll be able to better consider the structure of my year. But ultimately, I’d like to do a 50k in the spring, Comrades, 100K Worlds, and then one other race, possibly in the late fall?

Q&D: You’re in the process of a move to Seattle, where you’ll have greater access to trails and mountains. Have you thought about venturing into some more technical trail races soon? Or will you stick to the runnable stuff for the near future?

SB: Yes, we’re here! And yes, I’m super excited to have increased access to trails and more technical running. We’re still getting settled, but my husband and I are already plotting our weekend trips to the Cascades – though for the winter we will be mostly limited to hiking and skiing. But even in the city, there are some great trail running opportunities and I’d love to get better at running off-road.

Sarah Bard is supported by Altra Running and Craft Sportswear. You can follow her running adventures via Twitter and Instagram (@sarahjbard), or her blog at sarahjbard.com.

Here’s a short clip of Jim Walmsley and Sarah Bard running on the C&O Canal towpath past Harpers Ferry during the 2015 JFK 50 Miler.
https://www.instagram.com/p/-bwmzTq83Q/?taken-by=paulenki