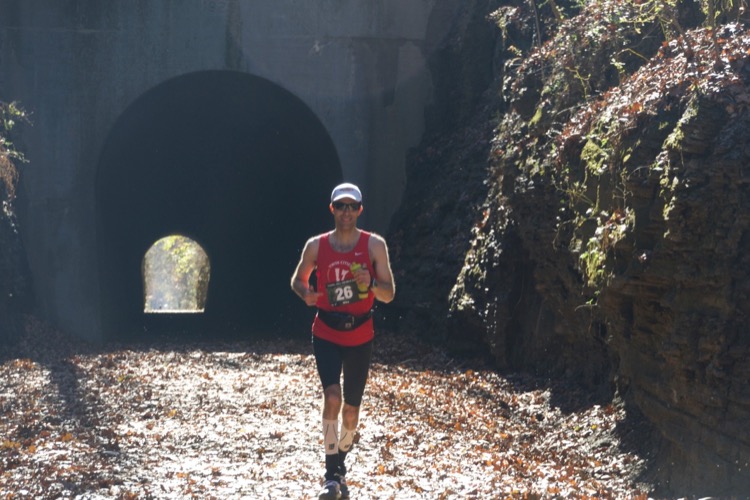 On Saturday, November 14, Minnesota runner Mike Bialick blazed to a 12:52:53 finish at the Tunnel Hill 100 Mile. The southern Illinois race is designed for speed, tracing a crushed limestone rail trail out and back from the small town of Vienna, IL. Last year, Tracy Falbo ran 14:45:26 in the inaugural race, a time that was a North American record for trail 100-mile at the time.

Bialick is based in Minnetonka, MN, where he works as a personal trainer and coach. The 34-year-old runner competed for the University of Minnesota in cross country and track from 2000 to 2004. In his post-collegiate running, Biliack first tackled distances up to the marathon, running a PR of 2:31, before moving to ultra distances when he saw his road times plateau.

Quick & Dirty: You just ran the second-fastest trail 100 mile ever in North America, just 8 minutes behind Ian Sharman‘s 12:44 (from the Rocky Raccoon 100 in 2011). Describe how the race progressed and your thoughts on it now.

Mike Bialick: First of all, I want to thank Race Director Steve Durbin for putting on such a high quality event. The course was great and the volunteers were awesome. I felt really good for the first half of the race. I came through 50 miles in 6:07 and felt relaxed. Things got tough around mile 66. I got very nauseous and started vomiting. I knew I wasn’t going to be able to take any more gels or solids, so I switched to the sports drink they were serving on the course, Sword. I responded very well to Sword and was able to finish strong. I am extremely happy with my result.

Q&D: You started running ultramarathons in 2012. You’ve been successful pretty much from the start—giving Ian Sharman a late-race scare in your first 50 miler for instance (finishing second place by just one minute, running a 5:58:52 at the 2012 TNF Endurance Challenge – Madison). However, it seems you’re really hitting your stride this year. Not only with your stellar run at Tunnel Hill 100, but with a win and your first U.S. Championship title at the Mad City 100K in April. What’s different this year? Anything that you’ve changed in your routine, or do you feel like a few years of experience and ultrarunning is simply paying dividends now?

MB: The biggest difference this year is I’ve added more biking to my training program. I typically run five days per week and bike and strength train on the other days. I feel this has helped make me a stronger runner. I used to run pretty much every day, and I felt like my body was starting to break down. I also feel I’ve become a smarter, more patient runner. I’ve learned a lot from my previous ultrarunning experiences and from veteran ultramarathon runner, Kurt Decker, of Twin Cities Running Company.

Q&D: Do you have any other races on your calendar this year?

MB: I’m not planning on racing any more this year.

Q&D: Unfortunately, you missed the 100K World Championships this year after a bout of illness in the weeks leading up to the race. Your time qualifier of 7:02:17 might qualify you for next year’s U.S. Team, but do you intend to run the 100K U.S. Championships (or another 100k) next year to try to secure either an automatic qualifier or a faster time qualifier?

MB: I was very disappointed to have missed the 100K World Championships in September. I got extremely sick with pneumonia in mid-August and ended up spending a week in the hospital. I would like another opportunity to be a part of Team USA. I’m going to wait until USATF announces its 2016 championship schedule and a date is announced for the 2016 100K World Championships before I finalize any 100K decisions.

Q&D: What other races are in your future plans—both short term and long term? Do you feel like the 100-mile distance may be your forte after last weekend’s performance?

MB: I’m not totally sure what my race schedule looks like for 2016. I definitely want to take a shot at another fast 100 mile. I feel like the 100-mile distance is a very good distance for me. I would also like to run a fast 100k and maybe give a 24-hour race a try.