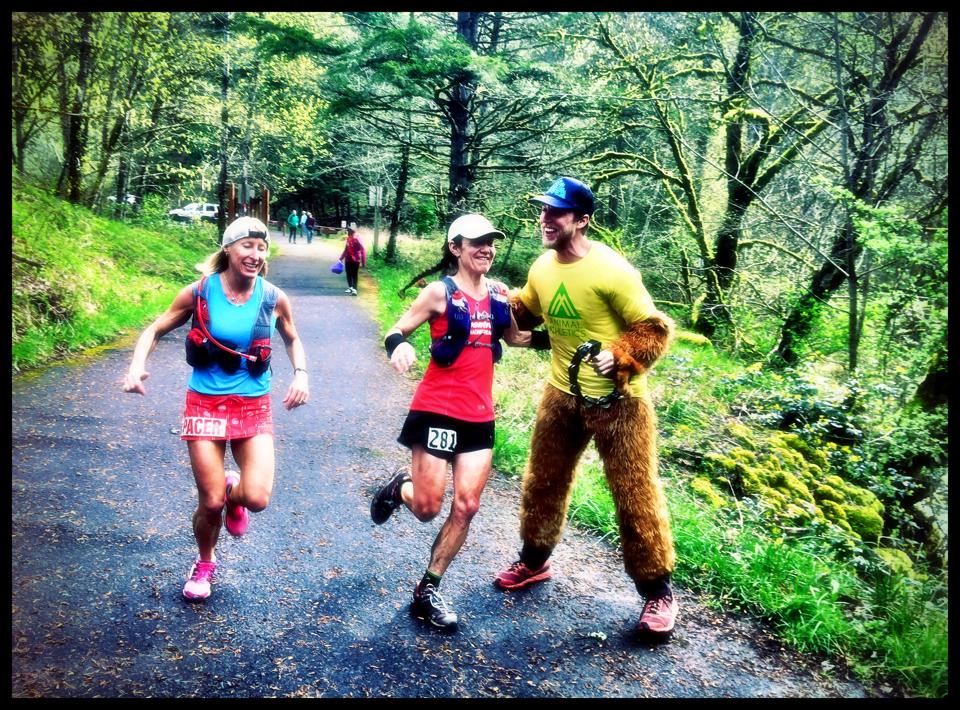 Vaught is cheered on by her friend Jeff Fisher and paced by Denise Bourassa.

Quick & Dirty: You had a good battle with a resurgent Michele Yates at last weekend’s Gorge Waterfalls 100, finishing second in 11:10:56 to Yates’s 11:03:05. How did the race progress for you? Were you satisfied with the performance?

Joelle Vaught: I am very happy with the performance because quite honestly I had no expectations for Saturday. My running for the last year has been rough because of low back and upper hamstring injury and problems. Some runs feel good, some feel really bad. I was really surprised to see Michele up ahead of me on a climb not long before the 50k turn around point and I had no idea she was in first. I assumed there were several women in front of me since the race started in the dark and I started back a ways. I just really enjoyed that first 50k, running with friends, joking, laughing, and enjoying the spectacular scenery. She went into the aid station before me. I went in, chatted with a few friends, got some water and headed out. I assumed she had left before me, but soon runners who where still heading out were telling me I was first woman. Then I felt some pressure to race. I felt really good for quite a while but then ran out of gas a bit toward the end. The 2-3 mile road section really drained me on the way back; I hated it! Michele caught back up with 4 or 5 miles to go and I couldn’t race her, just told her good job as she passed. I was really pleased with my time, from looking at the times last year I expected to be out there longer. I really enjoyed the race, lots of friends out there and a surprise pacer (Denise Bourassa) joined me, which was a lot of fun!

Q&D: Have you decided yet whether you’re going to take the Western States 100 Mile entry you earned at Gorge Waterfalls via the Mountrail Ultra Cup?

JV: No, I haven’t decided yet. At first I was sure I wasn’t going to take it. I’m doing an expedition adventure race in South Africa in the beginning of June, so I need to focus on that and I’ll probably be pretty tired from that, but now my friends are offering to crew and pace and it would be a lot of fun so now I’m considering it!

Q&D: Between now and Western States, you are registered for quite a few races: the Lake Sonoma 50 Mile (another MUC event) on April 11, the Quicksilver 100K on May 9, and the River of No Return 108K on June 20.  Are you going to withdraw from some of those in light of Western States?  How will those races you compete in fit into your training?

JV: I’m unfortunately not going to make it to Lake Sonoma, which is disappointing; I love that race. I’m still planning on Quicksilver and then the expedition adventure race in South Africa in June. If I decide on Western I won’t be able to do River of No Return.

Q&D: Until you ran the Tarawera 100K in New Zealand this February (finishing 8th female), you hadn’t raced since last summer’s Speedgoat 50K. I understand you’ve been dealing with an injury for a while. Are you healthy now or still dealing with it?

JV: I’m still dealing with it; it is really day by day. I learned last year I have a fracture at L5 and surgery was suggested. I opted not to have surgery and have instead worked on strengthening everything that supports the low back and have tried to incorporate some yoga to work on my terrible hamstring flexibility! My back has actually been feeling a bit better, I’m still struggling with the hamstring tendonosis but they say that is something that will eventually go away!

Q&D: You don’t seem to structure your training very rigidly. How would you characterize your approach to training and racing ultras?

JV: I have no structure to my training, I just run because I love being on the trails and running with my friends and dogs. There is nothing specific to it. I really do whatever I feel like that day or whatever I have time for. I try to run where there is water for the dogs. We’ll try to get some longer runs in if there is a race coming up. I probably should do speed work but I don’t like it so I don’t!  I run for the enjoyment of it, not to prepare for races. I enjoy racing because it makes you push yourself more than you would on a regular run and I really enjoy the ultra crowd and have made some amazing friends.

Q&D: Trail dogs seem to be a popular bunch in the ultra community these days! Can you tell me a bit more about yours?

JV: I can’t imagine running without my dogs, it’s definitely what I love most. Currently I have a German Shorthaired Pointer, Zane, who just turned two. He is 100 mph all the time, just an amazing dog to watch run. I also have Marley, who is mainly a mutt! He’s the happiest, most mellow dog you will meet. He is slowing down a bit but loves runs with lots of creek crossings. My neighbor’s dog, Cooper, is a Golden Retriever who basically lives with us and does every run. He also seems to be able to run forever which is pretty impressive for a bigger dog. The great thing about dogs is they are always happy and excited to go, no matter the weather or the time of day and seem to have a blast on every run!