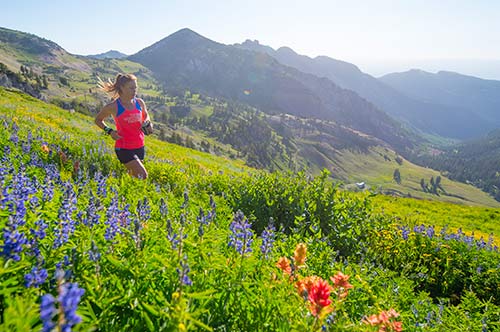 Hillary Allen, who sports the apropos moniker Hillygoat, has quickly risen to prominence in the ultrarunning world—especially in races with a lot of vertical. Though relatively new to running, the Colorado native has won several big name races, including this year’s Speedgoat 50K in 6:37:35.

Quick & Dirty: You just won the Speedgoat 50K on July 25, improving on last year’s 4th place finish and running 26 minutes faster. How did the race play out for you? Were you satisfied with your performance?

Hillary Allen: I’m still excited about winning Speedgoat, and mostly because I had no expectations going into the race. Of course I wanted to win, and this time I had the confidence that I could. However, the race didn’t pan out according to plan. I started off not feeling well (upset stomach and feeling tired). I think it was from my traveling and the Mont Blanc 80K I did about a month prior to Speedgoat. So I felt tired on the climbs where normally I would excel. So instead of dwelling on the negative I focused on running strong on the downhills and consistent on the uphills. It wasn’t until about 2 miles to go that I realized I was going to win and could get a new course record. I got Goosebumps when I crossed the finish line, I was very happy.

Q&D: What other race performances are you most proud of?

HA: This year I am most proud of my performance at Mont Blanc 80K, my first international race, where I placed 3rd [in 13:11].

Q&D: You don’t come from a running background. How did you get involved in ultrarunning and was there a moment when you realized you had strong potential or decided you wanted to pursue the competitive side?

HA: I come from a collegiate tennis background. I ran a bit to stay in shape, but it wasn’t until I started Graduate School (I just finished my Master’s in neuroscience) that I started running. I started with roads, ran my first road marathon in 2013 and about 2 months later ran my first ultra. I’ve always been drawn to the mountains. After completing that ultra all I wanted to do was to run on the trails, and explore new mountains. Last year was my first year racing, more from an exploration side of things (there are some cool locations for races). It wasn’t until Bighorn 50 Mile last year (my first 50 mile race) that I realized I could be competitive (I won [in 8:56:39] and set a new course record [also finishing third overall]).

Q&D: You seem to excel on rugged courses with a lot of vertical gain/loss. What is your favorite type of running and racing?

HA: I’m still discovering what style I like most, but it’s no lie, I definitely love to climb steep, rugged terrain. I’m improving my technical downhill skills too and that’s been a lot of fun. I’d definitely say the more vertical, the more I like it.

Q&D: Where do you do most of your training and with whom?

HA: I’m from Fort Collins originally, and I recently moved to Boulder, CO (as of this weekend). I do most of my training along the Front Range and as often as I can I’m out exploring the mountains around Colorado, Wyoming, and Montana. I’ve spent a lot of time in the San Juans and the Elk Mountains this summer; I’m planning to explore more of the high country for the duration of the summer.

Q&D: What’s next for you this year?

HA: Next I’m planning to run The Rut 50K! I love that race! If it fits, I might do the Flagstaff Sky Race. I’m also going back to France to run Le Grand Trail des Templiers 80K in Millau, France at the end of October. If I’m still feeling healthy, then I’ll run The North Face 50 Mile Championships in December.

Q&D: What are some of your long-term goals for the next few years?

HA: Longevity in this sport is really important to me. I’m planning to take a good portion off in the winter to bike and ski. Next year I would like to do some longer races (100k) to see how those go. I’ve only done two 50-mile races so I’d like to try out something longer. I’m always looking to improve my mountains skills and technical running; this year I started to combine rock climbing and scrambling with running, so races like the Tromsø Skyrace [in Norway] are appealing. Eventually I’d like to attempt the Nolan’s 14 route as well [which connects the 14 summits over 14,000 feet in Colorado’s Sawatch Range].

Hillary Allen is supported by The North Face, Swiftwick Socks, Hammer Nutrition, Run Steep Get High, and Team Colorado. You can follow her adventures on her blog and through her social media channels (Twitter: @HillaryFay_, Instagram: @hillygoat_climbs).