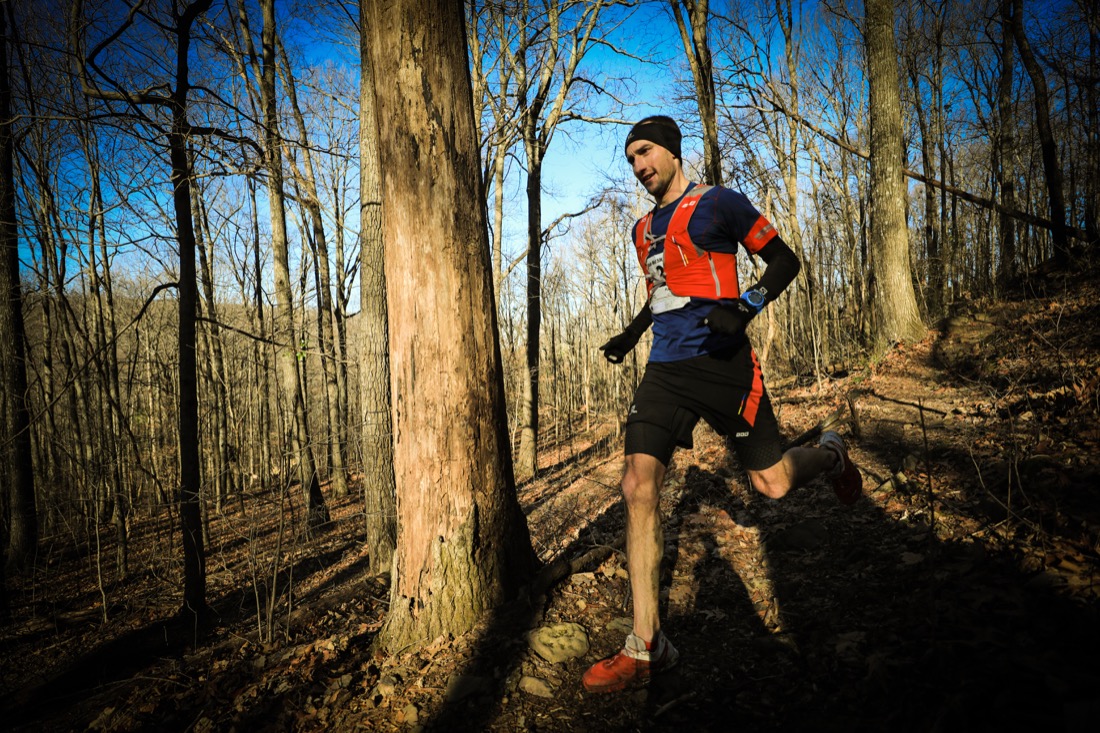 Riddle cruising and in control at the Mountain Mist 50K. Photo: Gregg Gelmis, We Run Race

On January 28th, David Riddle ran to a commanding victory at the Mountain Mist 50K in Huntsville, AL. It was his fifth win in six attempts at the southern winter classic, and his first since 2013. He had missed the last two years during a long injury layoff and subsequent recovery. In this interview, we chat about Riddle’s recent races, what motivates his racing choices, and what he’s thinking about next. The interview has been lightly edited for clarity.

Quick & Dirty: Let’s talk about your Mountain Mist win first. What was it like going back to Mountain Mist after missing a few years with injury? Had it been on your calendar? What’s the importance of that race to you?

David Riddle: I look at it as my hometown race, where I cut my teeth on the trails when I was living in Huntsville after college. It’s where I got really into the ultra scene. It’s one of the few races that I want to do every year. They have a special ten-year jacket award when you get that many finishes, and that’s a pretty big deal in that area.

I last raced it in 2014, and I had a broken pelvis when I raced. Scott Breeden beat me in that race. In 2015 I was still too injured to race. In 2016, I probably could have raced, but I had a personal conflict I couldn’t really get around, and I wasn’t fully fit, so it didn’t break my heart. But I had to get back this year, healthy again, reasonably fit, and just excited to see my Huntsville friends and get on those trails again. It’s still one of my favorite trails that I’ve raced on.

Q&D: So it was a bit of a homecoming for you. Did the race itself go well? Having run it many times before, did you feel you ran to your fitness and potential on the day?

DR: It played out really well. First, the weather and course conditions were pretty much ideal, just a beautiful day. It started around freezing and the course was relatively dry. Breeden was entered, but he didn’t show up, so I ran with one or two other guys for the first 7 or 8 miles. And then it was just me on my own. So I got to decide exactly how hard I wanted to run, exactly how I wanted to pace it. I got to go at that 98% level, you could say, where I wasn’t racing 100% all out, but I’m still pushing because I still want to run a good time and see where my fitness is.

In that regard, it was a big confidence boost for me. I had a good race at Pinhoti 100 Mile last fall, but a month later I tried to run The North Face 50 Mile Championships [in San Francisco]. That didn’t go quite as well as I hoped for various reasons. But to take a little layoff after North Face, and then come back, just starting to get my fitness back, and run that well alone at Mountain Mist was really, really encouraging.

Q&D: So let’s take a step back. For those who may not know, you had a very long injury layoff. And that was all centered around the pelvic stress fracture you mentioned. If memory serves, it took you a while to even figure out what was going on. Can you take me through that process of how you got the injury, how you figured out what it was, and the recovery process?

DR: I started having pain in my groin in the summer of 2013, and I ran through that for a long time, thinking it was muscle related. I’m sure it was rooted in overuse, but there were some acute issues there too. But I was never able to pinpoint exactly when it happened. It wasn’t officially diagnosed with an MRI until the spring of 2014, so I tried to run through it for almost nine months. When I got the diagnosis, I ended my seven-plus-year streak of running. So I had pressed through that injury and ran every single day. But when that stress fracture diagnosis came through, I just quit running.

I took several months off completely—no running, no cross training, nothing. It was kind of a relief, just to let the streak go and try to get healthy. But three or four months into that I was still feeling some pain in the groin, and that was really worrisome because I was expecting it to heal up. So I bought a bike and started cycling a bit late in the summer of 2014 and into the fall. It really wasn’t until the spring of 2015 that the bone in that area felt fully healed, but by that point I had a lot of collateral damage. My stride had been sort of knocked out of sync, and some imbalance still remained. I struggled with tendonitis and imbalance issues for probably another year after that. Even to this day, I’m still not truly 100%, but I’m really close.

Q&D: Moving past the injury, as you were starting to get into shape in 2016, I saw you had run a number of lower-key local and regional races. I think the first big one I noticed was Pinhoti. You mentioned earlier that you had a good race at the Pinhoti 100, and it was actually a course record (16:24:15). What was the motivation for Pinhoti—I’m guessing an Alabama connection. But that was also only your second 100 miler (the other being Western States 100 in 2012). What motivated the choice for a 100-mile race and for Pinhoti specifically, and how did that training build up and race go for you?

DR: There were several reasons why I wanted to run it. That race starts very close to where I was born. This past August I had my first son. Between being healthy, my son’s birth, and memories from my childhood around Mount Cheaha, which is the highest point in Alabama and the course runs over it… All those things, plus the fact that I wanted to get my name back in the hat for Western States. It all sort of combined to motivate me to get in a 100-mile race and give it a go. So I set my sights on that and went for it.

Q&D: It must have gone fairly well—you broke Karl Meltzer’s record from 2011. Was it totally smooth sailing, or were there some ups and downs. What was it like racing your second 100-miler as opposed to the 50-mile and 100k races that you have more experience with?

DR: Fitness-wise, I was really good. My legs were great. But I had big stomach issues. I never really get too nauseated in races. I usually struggle to eat enough calories, but in this race, I was actually getting sick. After about 60 miles, I was throwing up for 10 or 15 miles, dry heaving and that type of thing. That was a very different experience for me and a big struggle. Fortunately I was able to keep moving through that stretch and survive the last 30 miles basically on ginger ale and water.

Q&D: Let’s talk about the future a bit too. What’s on your radar? Are you thinking about a Golden Ticket qualifier to Western States?

DR: It’s on my mind, but I’m not really sure. After Pinhoti and The North Face, I was kind of questioning my motivation and what I wanted to do, also with having a 6-month-old baby at home of course. I was just reevaluating what I want out of the sport right now and where my priorities lie. I think Mountain Mist helped me understand where I’m at. Originally I thought I’d go after a Golden Ticket race, but right now I’m not sure.

Honestly I don’t have anything scheduled in the next four or five months. But I’m starting to get my focus and figure out what I want. I think I might go back to the shorter stuff for a while, some road stuff—things I can train for straight from my door in Cincinnati, so I can spend more time with my son. Maybe Strolling Jim 40 Mile, which is kind of a classic southern race in Tennessee.

Q&D: Well it sounds like you’ve got a good perspective on where you are right now and will just let it come to you, see what feels right.