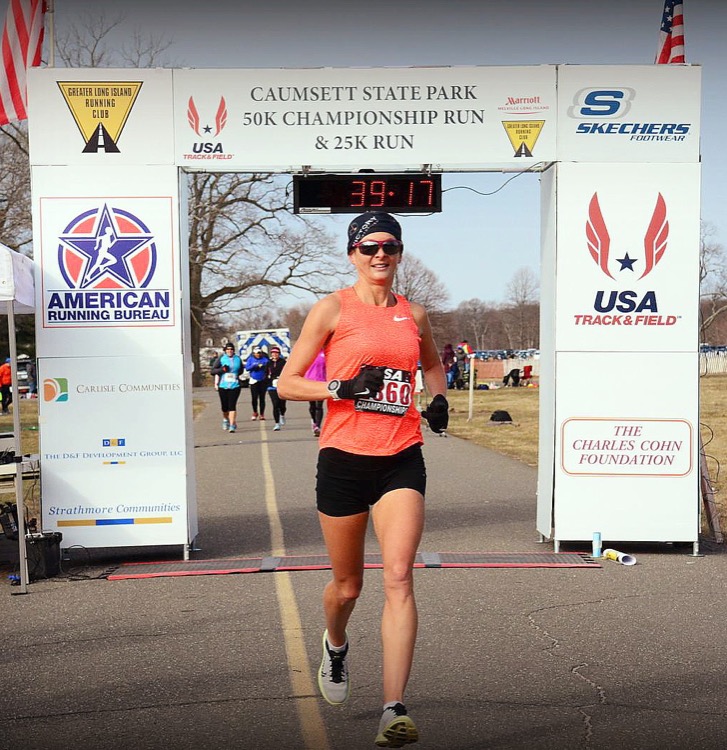 At the U.S. 50K Road National Championships (hosted by the Caumsett 50K) on Sunday, March 6, Caroline Boller raced to a dominant victory, besting second place by over 17 minutes with a 3:22:50 finishing time. With the win, Boller earned an automatic selection to represent the USA at the 2016 IAU 50K World Championships. She also broke the Master’s American Record (formerly held by Mary Coordt at 3:28:30) and logged the eighth-best 50k ever by a North American resident.

Quick & Dirty: Congratulations on your victory at the U.S. 50K Championships last weekend. How did the race progress for you and what were the most challenging aspects?

Caroline Boller: Thank you! Going into the race, I knew that I had a lot of recent road races under my belt and I wasn’t sure how my body would hold up towards the end of the distance. It had been hard to bounce back after the Houston Marathon. Not only had it been a PR effort, but it was also an especially difficult time in my personal life. My mother had passed away suddenly at the beginning of January, followed by my grandfather and a personal friend just a few weeks later.

Going into the Trials, I had a sense that it had the potential to be a rough race. The hot weather didn’t help, but ultimately my body simply wasn’t ready to race again at that point, resulting in a relatively slow finishing time. With that in mind, I raced Caumsett fairly conservatively. It had only been about a week before Caumsett that my body felt almost ‘normal’ again for the first time in many weeks. On the day, the first half of the race felt comfortable and unforced. After that, I tried to focus on losing as little time as possible as the remaining miles ticked by.

Q&D: With your win, you qualified to represent Team USA at the 50K World Championships. As a recent U.S. citizen (originally from Great Britain), what does it mean to you to have the opportunity to represent the USA?

CB: It’s an incredible honor. It’s hard for me to comprehend that my running is in any way at a level to justify this. I came to the sport late in life and could never have predicted the amazing journey running has taken me on. The World Championships will definitely be my primary focus after Western States. Having now gained a spot on the team, I’ll be bringing my absolute best on the day. I’m proud as a new citizen to have the opportunity to run for the stars and stripes. While I consider myself almost equally British and American, I live in this country and my husband and I raise our children here. It’s very much home.

Q&D: You raced the 50K Championships on only three weeks of recovery from the U.S. Olympic Marathon Trials, where you ran a 2:57:06 for 108th place in hot conditions. That race came right on the heels of your marathon best and Olympic Trials qualifying mark of 2:44:25, run in mid-January in Houston. How did these races fit into your broader plan? Were you at the end of a training phase just holding on? Or was it always your intent to run all three races in a seven-week span?

CB: It was definitely not my intention to do so much racing, let alone on the road! There is no broader plan!

I’ve come to a place where I realize how important it is to me to run races that I’m passionate about. I fell into a trap of feeling like I ‘should’ run certain races whether deep down I really wanted to or not, and that didn’t work out well for me. However, as soon as I heard that the Olympic Trials standard had been relaxed (from 2:43:00 to 2:45:00), I knew I had to go for it. I was on the phone to my coach within minutes after hearing, excitedly telling him I had to do this. It has changed everything. After qualifying for the Trials at Houston, I wasn’t about to miss out on the Trials experience, even though they were just four weeks apart.

Since my Trials race was run at a relatively slow pace due to the heat and somewhat poor recovery from Houston, I think my body reacted to it almost like a long steady-state training run. Within a couple of weeks after the Trials, I was feeling good and I knew I had to give Caumsett a go. I had road fitness and I wanted to see how that would translate over the ultra distance. Ideally, I could have benefitted from more time in between, but the races are held when they’re held!

Q&D: What’s next? I know you’ve got the Western States 100 Mile on your calendar, having earned your return ticket via your eighth-place finish last year. Have you solidified other racing plans and will Western States be a big focus?

CB: Western States is definitely a big focus! It was my first 100 miler last year and I learned a ton from the experience. I’m hopeful that my road legs will be helpful over the distance. I still have a lot of work to do to improve my hill strength and endurance for the long haul, but there’s plenty of time for that and I’m already starting to switch up with some trail time to prepare. I don’t have any other definite race plans at this stage for the period prior to Western States. I’ll definitely get something in, and I have some ideas, but I need to discuss this with my coach first!

Q&D: Do you plan to continue running the marathon and shorter-distance ultras to improve over those distances in the coming years?

CB: Absolutely! I believe road and trail running complement each other and switching it up helps keep me feeling fresh. I also love the challenge of a new goal, so I haven’t ruled out something completely different in the future either, such as a 24-hour race. With the marathon distance, I have a goal of running sub-2:40 one day and I believe in my heart that this is possible. Being a relatively new runner, my speed work is constantly evolving and improving. I may be 41, but I’m convinced my best racing years are still ahead of me.

Q&D: You came to competitive running in just the last few years. How did you get started and what motivates you to hit the trails?

CB: I ran a little off and on over the years, but just a few miles here or there and very sporadically. I never gained much fitness, and there were years where I did almost nothing athletic at all. When I hit my late thirties, my husband started running consistently and I could see the difference it made in his life. He was happier, healthier, revitalized. I sat back and watched this transformation while I struggled with a few extra post-baby pounds and pre-hypertension. First, I started running on the treadmill in the garage while the kids were napping. I liked it and kept at it. Finally, my husband encouraged me to check out the State Park across the street that I barely knew existed.

I fell in love with trail running the first time I went out there. It was my escape and my release; the one place where I could leave being the mother of two amazing but busy young boys behind and do something entirely selfish just for me. I came to realize that I crave the connection to nature that many of us lose in our everyday lives. Running has made me a better person and a better mother. The bonus is that my kids think what I do is pretty cool and my whole family is really supportive. I couldn’t do it without them.

I’m coached by Mario Fraioli. I’m very much in need of coaching guidance! My tendency is to overdo it in volume and underdo it in intensity. (I’m an endurance athlete, go figure.) Mario has helped me work on many things. In particular, under his guidance my short distance speed has improved and this has led to breakthroughs in my paces at all distances.

Q&D: As an elite ultrarunner who is also the mother of two young boys, it must be challenging at times to prioritize training. How do you find balance between your running and family life?

CB: It’s a constant struggle during the week to find balance! Now that the kids (ages 6 and 8) are both in school, there’s a little more time for me to train and work during the day. I only work part time, but it still feels like there just aren’t enough hours to get everything done well. My husband and I share getting the kids ready for school in the morning. He works full-time, so I leave around 2:30 p.m. to pick up the kids. From then until their bedtime, I’m a hands-on mom with homework and activities. I like to try to tire them out so they go to bed early! Later on, I’m often squeezing in more work to try to stay on top of things. We also try to keep as much of the weekend as possible as dedicated family time, unless I’m racing. Some days it all goes smoothly, other days it doesn’t. Overall, I think it works out.