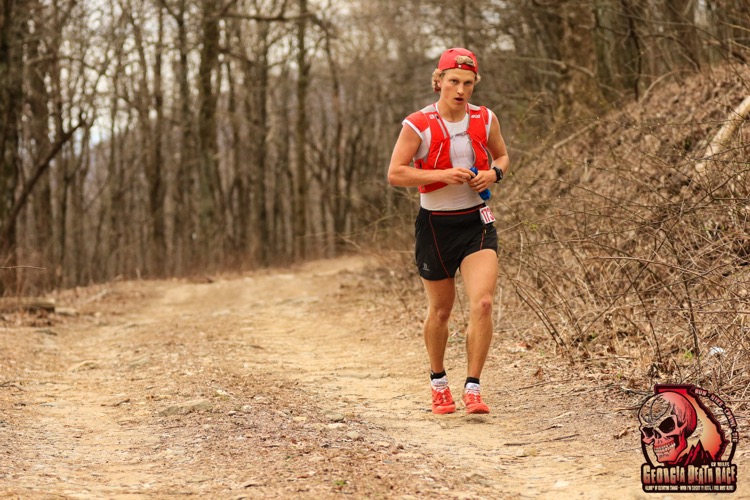 Andrew Miller is one of ultrarunning’s young rising stars. With a repeat victory at the Georgia Death Race on March 19, Miller earned his first Western States 100 Mile appearance. Despite being just 19, he already has several 100 mile races under his belt and thinks and runs like a veteran. In this interview, he discusses his recent win at the “hardest race east of the Rockies,” as well as his training, goals, and recent move to Flagstaff, AZ from his Corvallis, OR home.

Quick & Dirty: First thing’s first: congrats on your Georgia Death Race repeat victory! How did the race go for you? What were your biggest challenges, and how did it compare to your win last year?

Andrew Miller: This year’s Georgia Death Race went really well for me. The biggest challenge for me to overcome may have been knowing that my training wasn’t quite what I was hoping for. This is my first year in Flagstaff so when I came back to school in January, the trails were under a bit of snow, and I wasn’t really sure how to train in the snow. I’m used to dealing with endless Oregon rain in the winter, so trying to run was hard. I ended up doing a lot slow slogging which was a good workout, but not optimal for running. The other training challenge was I got pretty sick for a week about 6 weeks before the race. I ended up taking most of that week completely off running, so I was a little unsure what I would have on race day. Given that, I was more mentally prepared for this race than any other I have run, and the Georgia Death Race was by far my strongest mental performance yet.

Q&D: Now that you’ve secured your Western States 100 Golden Ticket, what are your thoughts and goals headed into the big dance this June?

AM: Obviously I’d like to be competitive at the race and see how I stack up against some great runners, but my main goals are all about doing the best that I can regardless of others. Before the race I hope to improve the specific weaknesses I had at the Georgia Death Race, improve my overall fitness, then enter the race healthy and rested, and run the best race that I can.

Q&D: You have 50K finishes dating back to 2010, when you were 14 years old. I think you first came onto my radar as winning the Orcas Island 50K, which you won in 2014 and 2015. You also took first at the Georgia Death Race last year, but perhaps your biggest achievement yet might be last summer’s Bighorn 100 Mile. You won that you’re your second 100-mile finish—in 18:29:37, besting Mike Foote’s 2012 course record by seven minutes. Can you tell me a bit about your Bighorn race and what you’ve learned from your 100 milers?

AM: Running Bighorn last summer was a great experience. So far, I think 100 milers are my strongest distance, but my run at Bighorn really showed me that they are my favorite distance. The race itself went very well, except for the first 30 miles where I struggled to get in a good groove. After that, I started to get rolling on the long climb up to the turnaround. After hitting the turnaround, I pretty much felt great for the rest of the run (or as good as one can feel at that point). The biggest thing I learned was how important it is to be mentally strong and how mentally strong I can be.

Q&D: You’re a freshman at Northern Arizona University in Flagstaff, AZ. What are you studying? Has Flagstaff been a good move for your training as well? Do you run with many local ultrarunners there?

AM: I’m studying Exercise Science. It’s been really interesting so far as it pertains closely to running, but I’m still keeping an open mind in case something more interesting comes up. Despite the winter snows making running tough, I love Flagstaff. There are tons of steep, rocky trails, which I love, but also a good mix of more runnable stuff to mix it up. Last fall I caught up with Sean Meissner, who’s now in Durango, but haven’t run with anyone else. I’m hoping to catch up with a few other people, but I just need to get a hold of them.

Q&D: You got into running at an early age due to your mom running ultramarathons. How has she influenced your running over the years? What other mentors do you have in the sport? Do you have a coach?

AM: The biggest influence that my mom’s had on me is giving me constant support to do what I want to. She’s never pushed to do any specific runs and has always just encouraged me to have fun. This has been really important, as running has remained a fun escape for me. I wouldn’t say that I have any specific mentors in the sport, but a there’s a lot of people I look up to and a lot of people who have given me great advice (notably Joe Uhan has shared a lot of great advice on nutrition over the last few months). Also, the whole running community in Corvallis is a great group of people who constantly inspire me to keep running and having fun. I don’t have a coach and this is largely because I like to learn how to improve. I’m more interested in learning how to improve than just doing what someone says will make me fast. Also, I like to keep running as a fun escape and have no specific expectations other than to just have fun.