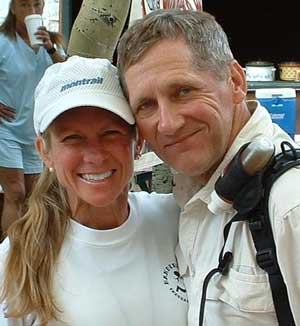 Ed. note: Long-time RD and Texas ultrarunning insititution Joe Prusaitis recently announced the sale of his well-known and highly regarded ultra races, including the Rocky Raccoon 100 miler and the Bandera 100k to new owners Chris and Krissy McWatters. We asked Joe if he would be willing to share a bit of his story with us.

Tejas Trails began in 2001 with no big intentions (Hells Hills / Rocky Hill Ranch). I simply wanted to try my luck at directing a trail race. Not that I wasn’t already busy enough: married with 6 kids, engineering job, and the standard set of home & family chores. We couldn’t afford to lose any money, but I wanted to do it right: provide shirts people wanted to wear, a medal worth keeping, unique & interesting awards to brag about, and create entertaining courses that were worth remembering.

We had zero experience with running a business. No financial, marketing, or management skills. Best we could figure, as parents we knew a lot, so we applied some kindergarten rules we used on our own kids. Simply: treat everyone else on the playground like you want to be treated, do what you say you’re gonna do, have some rules for fair play, respect the rules, and don’t change the rules after the game has begun. We tried to keep it simple, financial and otherwise. We started building contacts and developing relationships with other race directors, businesses, & contractors. In a short period of time, we created methods & processes. Solving logistical issues, we spent hours & days at a time with course design, course marking methods, then how to set it up & tear a course down efficiently. Aid stations needed to be in the exact right place, with the right crews, and excellent support. Layout of the Start/Finish area was a jigsaw puzzle to solve for the efficient flow of people & equipment.

I wasn’t looking to do more than one race, but an odd set of circumstances led me to create a 2nd in 2003 (Bandera). Another twist of fate handed me another in 2004 (10 year old Rocky Raccoon). Even then, I still had no intention of growing Tejas Trails… until I lost my job (Engineer at Motorola). I was surprisingly upbeat and excited about being laid off. I was burned out & ready for a change. Joyce & I decided to try our hand with the business of Race Directing & Coaching, so we looked at adding more races, with the idea of creating an income spread across the calendar year. Taking our time to develop each event carefully, we added Cactus Rose in 2006, Wild Hare in 2009, Nueces in 2010, Pandora’s Box of Rox in 2013, and Paleface in 2015.

Initially, I created the art & graphics for logos, shirts, and medals, and later started working with a friend for a more professional look. Another friend, working in the cartography business, helped me layout and map each course. Others helped tune each for what was the most fun. The website I built and managed grew a 2nd face with the addition of Facebook. The race site had all the hard facts and information anyone needed, while our Facebook page quickly grew into an enormous and very active community that provided the necessary human side to the details. All of it kept growing and spreading until it included trail runners all over the planet. I had no idea what one little idea could become. Our Tejas family never stopped growing. Volunteers, runners, and families of each all became part of the tribe.

Over a period of 20 years, Joyce & I directed well over 100 races with the help of some very dear friends. The way we lived, from one race to the next, helped us to become very efficient. No matter the minutia, we fine tuned every part of each race. We could tell you not only the right & wrong of every process, but why, including the grimy details that nobody ever really wants to talk about. It was a lot of work for Joyce & me, but it was nice knowing our office had effectively moved from cubicle to ‘out there on the trails’, work desks became backpacks with laptops, and our schedule was whatever we wanted it to be. Fresh ideas continued to flow for new venues & some great changes to the old ones, but it was still just Joyce & me, and we had topped out. There was no time left in our day, no day left in our week, our plate was full!

We started talking about selling Tejas Trails & retiring, and how much we needed to get there. We didn’t know if we could sell the business or if anyone would buy it, but we knew what it was worth and we also knew it was hard to quantify. Our physical assets were small, so the collateral would be low, but the brand (Tejas Trails) was huge. We owed nothing, had no employees, no commitments, our brand was excellent, and our profit margin was phenomenally good. On top of all that, the trail running business was booming. I turned 60 this year and Joyce is right behind me. We have 6 kids and 6 grandkids. It was time for us to quit working so hard and maybe even start running again. So, we started shopping for a good buyer: somebody who knew what we had and would do it justice. A person with similar morals and ethics who could understand some of the more subtle things we had done and be able to build and expand on it. They needed to be young too, so they would have the time to develop the business and could do the hard work that this business took. This is a full time job that works you like a dog while at the same time allows you to set your own hours (up to a point), and last but not least, be your own boss.

After a few misses, we finally found the right persons in Chris & Krissy McWatters. We had met them a few years ago and had worked with them on an event. Chris has a lot of experience working at a year-round camp, as well as being an event director of track meets, trail races, and adventure races. More than anything else, he had the right heart & attitude. We liked them both very much and knew they could pull this off. We agreed to stay with them for a year (one complete cycle of races) to do a proper hand-off. This would be a year long race directors training school as much as anything else. and in real time, real dollars, and real world. After a year is up, Joyce & my commitment is up, but who knows, we may be here a lot longer.

A lot of runners outside of Texas may not even know what Tejas Trails is. In a nutshell, it is a trail running business that includes high quality trail running events. It is the same organization, director, structure, mood, attitude, care, & understanding for all of them, yet each race is different in their own way. The events are: Bandera 100km, Rocky Raccoon 100mi, Rocky 50mi, Pandora’s Box of Rox Marathon, Hells Hills 50mi, Nueces 50mi, Paleface 30km, Cactus Rose 100mi, & Wild Hare 50mi. It is part of a variety of series, including the Tejas 250, Tejas300, Tejas400, Texas Trail Championship Series, Montrail Ultra Cup, & LaSportiva Mountain Cup. Two of the races are USATF National Championships (Rocky Raccoon / 100mi Trail, and Bandera / 100km Trail) Some of these races get 700+ runners, while the smallest is over 300. You may not notice this on the UltraRunning end of year summaries, because the runners are spread across 3 or 4 events. Bandera regularly gets 700 runners all on the course at the same time: 300 in the 100km, 200 in the 50km, and 300 in the 25km. Rocky 100/50 got so big, we had to split it into 2 races on 2 different weekends. In all races last year, we had over 5000 runners, and it continues to grow. The business looks great, the market looks great, our sport looks great, so we feel we are leaving Tejas Trails in excellent shape and in excellent hands. Anyway, it has begun! The next chapter… for the McWatters’ and for the Prusaitis’.

Not sure what all we will do with the extra time. I will continue to coach. I would like to write. I will continue to devour books (love to read). Joyce and I would like to get back to running again. Hell, I’m only 60. John DeWalt has shown us that we can run much longer than that. I still got another solid 40 years before I should think about slowing down. Mostly, we’ll finally have a lion’s share of our time back to spend more time with our extended family. It has been a lot of fun… but now it is better!

Anyway, maybe we’ll see y’all out there on the trails.
Joe & Joyce Prusaitis

Joe,
Write a book for current and aspiring RDs for long ultras. As someone who has volunteered on a few 100s and 50s, I believe the vast majority of trail runners and RD wannabees have no idea what it takes to put a race on. The many days prep before the event getting permits, supplies, volunteers, and general organization, actually RDing a long race for a day or two and dealing with the issues that show up, and then having to clean up all the equipment, get the results out, and sweep the course is shocking for the runner who only has to show up, run the race, and go home to a good meal and bed.

Best of luck to Joyce and you, and enjoy another retirement. See you out on the trails,
bud phillips

Thanks for some great races. Best of luck and hope to see you on the trails.

Congrats to Joe on his retirement. A true pioneer and always a class act!

I have known them before were wed. Always a good couple that brought integrity to everything they were involved.