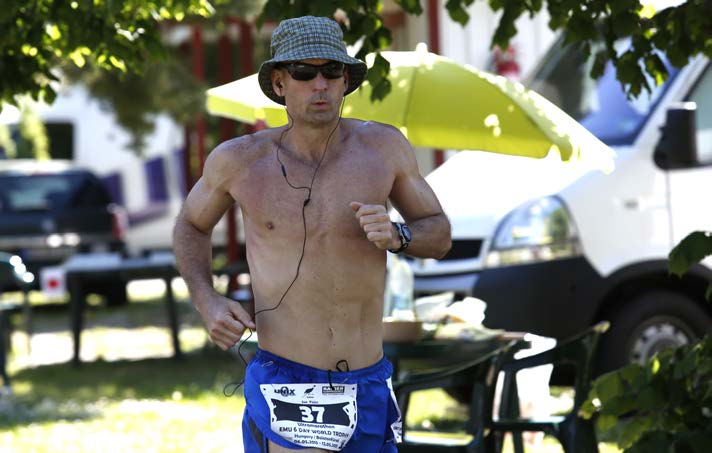 This May, after falling just short of the magical 600-mile mark last year in Anchorage, AK, Joe Fejes became the first modern-day American to break the 600-mile barrier in six days at the EMU World Trophy races in Hungary. Zane Holscher caught up with Joe and obtained the following feedback and insights on his huge accomplishment.

Zane Holscher: You are only two days separated from the finish of your historic run. What does each part of your body feel like at this moment?

ZH: Can you put into words your darkest, most painful moments, and your highest moments over the last week?

JF: Darkest, most painful moment #1: Two days before the race started, I slipped in the bathtub in my Budapest apartment and landed full force on my ribs. I had to have Mike Dobies and another friend pick me up off bathroom f loor. I didn’t think I would be able to run the race. The pain was excruciating when I coughed, sneezed or twisted. Fortunately, it didn’t hurt much when I breathed or ran.

Darkest moment #2: On day two of the race a sore red lump developed on the side of my Achilles tendon. At first I thought it was just caused from the timing chip belt or possibly my shoe, but then I remembered suffering a similar issue during Across the Years. I had Mike Dobies contact my medical advisor Richard Schick remotely to help me decide the severity and concern for permanent damage. We concluded it was simply tendonitis, and that the injury, while annoying and painful, would not require cessation of my race.

Darkest moment #3: On day two, the RD informed me the weather outlook called for warm, sunny weather the remainder of the race during the days. I was concerned this would significantly jeopardize my goal of 600 miles, but was determined to make necessary adjustments to deal with the warm weather. Highest moment #1: Day one—hitting 100 miles in 16:01 feeling very comfortable and having zero gastrointestinal or bloody urination issues. In my prior six-day attempt I had blood in my urine for 5 of the 6 days as a result of a suspected bruised bladder. In Hungary my urination was transparent and issue-free. I also was eating and drinking better than any race I had ever competed in and knew I would have a solid first 24 hours.

Highest moment #2: Achieving 600 miles—once I hit the 600-mile barrier, the stress and concern that had accumulated for the past six days disappeared.

ZH: Clearly the race went somewhat according to plan since you met your goal, but how did each day stack up against what you thought you had to do prior to starting?

ZH: Maybe the biggest question on Facebook this week: what did you eat for six days?

JF: I was able to consume vast quantities of everything and anything… and I did! My staples for drink were water, Clip2 (Succeed), Coke supplemented by Malto Vit, hot fruit tea and cold espresso. During the heat of the day I relied heavily on HIT vanilla ice cream bars for quick calories, and I must have consumed over 20 of them. I also consumed a number of homemade jelly crepes I received from the local volunteers that provided a fantastic energy boost. Among the finger foods I consumed were a variety of cheeses, meat spreads—goose liver on bread, hot dog links, pasta, fruit parfaits, a significant number of fresh tomatoes, olives, pickles, potatoes as well as all kinds of broth and cream soups. You name it, I ate it. I also experimented with gels, Gu and shot blocks intermixed with my real food consumption. At one point I asked the RD to buy me a jar of creamed or pickled herring, which felt like rocket fuel being added to the fire.

ZH: What does your run mean for American ultrarunning and six-day running in general?

JF: Hopefully my performance triggers renewed interest in the six-day events in the USA as well as in other countries.

ZH: What is the next goal for you?

JF: If the weather had been significantly cooler, I believe my mileage may have met or exceeded either the 1000k (621 miles) benchmark or Yiannis Kouros’s world record of 644 miles.

Joe is having an affair with Kelly Hannah Wells he is married he has abandoned his wife and his only child daughter May 22, 2005 It is called adultery