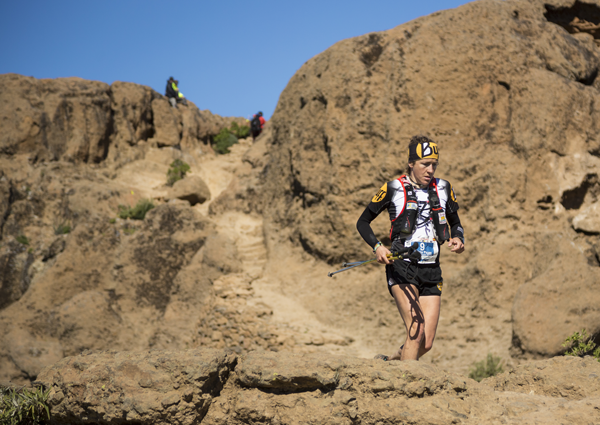 “I love running in places I’ve never been to before”, says Spanish ultrarunner Nύria Picas

If there was one thing I knew about Nύria Picas, it was that between her job as a firefighter, her family and her training is the fact that she clearly has very little time to attend media interviews. In order to make this easier for her, I did not hesitate for a moment in getting myself to Berga, a small town in Catalonia where she lives. On arrival, I telephoned Nύria to agree on a time for our meeting. She was of course in the middle of a training session; she answered breathlessly “I’ll call you back when I’m done”.

We agreed to meet at the outstanding fitness center where she trains. Lluís Soler would be taking some photographs to accompany the article. Nύria moments later appeared relaxed and smiling, with her partner and along with her children; a pair of lovely twins aged three who were ready for their swimming lesson and lots of running around!

At this time the weather was awful outside; gray and rainy definitely not the best day for an outside photo-shoot. We then decide to go straight to a cozy bar in town to talk. Just to break the ice, I ask her about “La Patum”, the town’s festivity listed as an Intangible Cultural Heritage by UNESCO.  As she goes on about it, she smiles widely and says:  “La Patum is the time when Nύria Picas the ultrarunner disappears completely.  I enjoy partying; I like traditional celebrations, popular festivals and drinking beer”.  With that stated, there was no doubt about what to order at the bar…

However, I remember seeing pictures of her while racing, looking so serious and meticulous.  That person is totally unrelated to the Nύria in front of me, twiddling childishly with a curl coming out of her ponytail.  During our chat, I realize that there’s this particular Nύria and then a very different one when competing. She explains “I try to have all things under control, mentally set to feed my body properly and being careful to avoid tripping over”.

Just to give you an idea of this prolific athlete; she’s currently considered the equal to ‘Kilian Jornet’ and second to none on the ladies side. Born and raised as a Catalonian, Nύria is also an advocate and proud one.  Now that she is in the spotlight, she still gets to have fun at races but she also misses the peace and silence she enjoyed when nobody was watching.  “After all, I ran my first marathon in the past century.  Some people are just unaware that I’ve been running with a number for the past 20 years!” she says, while waving hello to some people in the bar.  Every local knows who Nύria Picas is, even if it is only been four years since she decided to move to Berga, in order to be closer to the mountains.  She describes this spot as “a luxury outdoor gym”.

“How did you get into this sport?” this question is indeed a pertinent one.

NP:  My parents are both mountaineers and they used to take me hiking and climbing.  Actually, my father took part in a Mt. Makalu, the 5th highest mountain, in the Himalayas expedition in the 70’s.  I was born in this environment.

VL:  That’s not surprising.  A chip off the old block.

NP:  Well, I’m not so sure, because my older brother is not into sports at all.  He prefers the finance world and reading in his office.

VL:  But have you ever been rebellious, by any chance?

NP:  Oh yes.  When I was 15, I just wanted to ride my motorcycle, go to the movies, play table soccer and drink beer with my friends.

NP: Oh, yes!  I had my first binge at that age.  Later, when I was 17, I went back to sports and I gave up that entire scene to do potholing, mountain bike and more and more mountain climbing.

This interdisciplinary background throughout her career makes a huge difference, according to Nύria.  “I’m very much a mountaineer.  I run as part of an alpine sport culture, not track and field”, she remarks emphatically.

By the time this is published, Nύria will be in Japan with Anton Krupicka and Joe Grant, her fellow runners at the Buff sponsored team.  They want to survey the course and to acclimate themselves before the Mt. Fuji Ultra Trail (UTMF), on April 25th.

After coming 1st female in Transgrancanaria run last month, Nύria is in good position to win in Japan.  And she is well aware of that.  Nevertheless, when asked about her goal, she is cautious and answers:  “As usual:  slowly, steadily and cold blooded”.

Her strong point is her speed when running the ridges downhill.  This woman knows how to run super-fast!  She can also be very tactical, assessing her contenders and planning her strategy whether she is in the lead or a chaser.

VL:  After UTMF you have Transvulcania, Ultra Trail Mont Blanc (UTMB) and Ultrapirineu, nothing more or nothing less.  The above mentioned are one of the most celebrated ultra-events in Europe, with world-class ultrarunners taking part.

“Well, we’ll see…  I’ll only race Transvulcania if I have a good recovery from Mt. Fuji.  They’re only 15 days apart and it’s a little bit rushed.  Ultra races are very demanding and there’s the UTMB at the end of August.  This is definitely my biggest challenge for 2014 and it makes me very excited.  This is the one race that any ultrarunner would like to pull once in a lifetime”, she confesses with shining blue eyes.  In case you have forgotten, Nύria placed 2nd female at 2013 UTMB.

VL:  And what about the US?  When do you plan running across the pond?

NP:  I have been to New York City, but I’ve never ran in America so far.  I can’t wait to go to the States!  Maybe I have the chance to race Speedgoat or The Rut this year, but I’m not sure.  I would say 2015 will be a good time for me to attempt one of the more emblematic races over there.  I’m thinking about Hardrock 100, Western States or Leadville.

VL:  Do you intend to go and smash it?

NP:  As my life and sports is all one, what I want above all is to travel the world, get to know different countries, meet new people and to improve my English.  From then, running and giving everything I have becomes second goal.  Winning depends sometimes on how a race unfolds.

Nύria is 37 years-old, though she is in her finest form at this moment but being as relentless as she is, I think it will be not long before we see her attempting more and more alpine sports, at higher altitudes, very likely using ice axes and crampons.  I picture her being always in good company, whether it is some other adventure with friends or teaching her kids just as her parents taught her.

Before wrapping up our conversation, Nύria takes a last sip of beer and adds: “If I run a good race at UTMB, I might take a vacation” she says with an enigmatic smile.  As we leave the bar, her cell phone rings and she answers in Catalan, her mother tongue.  It is one of the girls she is meeting next.

“Old friends I presume”, I dare to ask.

She answers right away:  “Oh, yes!  They’re the same bunch of people I used to party with when I was 15!”. Nύria laughs naughtily…