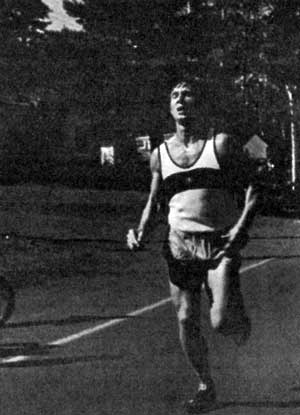 An Interview with Frank Bozanich (1981)

This article originally appeared in the 2nd issue of UltraRunning Magazine, June 1981.

Frank Bozanich. No other name in modern American ultradistance running conjures up such a perception of perseverance and toughness. At 36, the former Marine Captain and Viet Nam veteran continues to demonstrate his prodigious talent at these grueling distances.

Born and raised in Anacortes, on Washington’s San Juan Islands, Bozanich was exposed early on to hard work. As a boy and throughout his teens, he worked on fishing boats, hoisting heavy, fishladen nets, and working seven day weeks. After college and the Marines, he returned to his home state, and now lives with his wife and three children in Bothell, just outside of Seattle.

Every spring at high school and college, Bozanich was out for track. But he did not run long distances. Instead, he took to the blocks and ran on the sprint squads at distances from 100 meters to 440 yards. His times were respectable. As an Eastern Washington College runner, he produced a sub 50 second 440, a very competitive time in the early sixties, especially on a beat-up old cinder track.

While stationed with the Marines in Quantico, Virginia Bozanich experienced his first taste of road racing. Having competed in inter-service track meets at virtually every distance, he had maintained his fitness at a good level. It was a marathon in Durham, North Carolina that launched Frank on what has proven to be the most consistent string of ultramarathon performances by an American. He ran a 2:42 at that race, and by January of 1972 he was hooked on road racing. The next stop on his Marine agenda was duty in Japan. New thoroughly infested with the running bug, he began training with a vengeance. and racing at every opportunity. His times plummeted and soon he set what is still his marathon P.R., a 2:25:26 on the dead flat Beppu Marathon course. That was in 1975, and he had already run his first ultra. While on home leave in Washington in 1974, he ran in the AAU 50 km championship in Kent; his time there, 3:02:24, is also still his best time for the 31.07 mile race. But bigger things were yet to come.

After a 2:26 at the world Masters Marathon in California. where he had been restationed,

Bozanich tried his first 50 miler. After circling a Santa Monica track 200 times in 5:30:31, he decided that he had found the distance at which he could be most competitive. Thirty-five ultramarathons later, his performances are the stuff of legend.

Bozanich running through Yakima with Dick Goodman, director of the Yakima Ultras.

Perhaps the year 1979 is the best example of the kind of consistency he has produced. The year began in January at the RRCA National 100 km in Miami, where his 6:51:21 was a new American record, 23 minutes under the old record. One month later, he ran a 5:19 at the Marysville to Sacramento 50 miler. Another month later, he placed second at the mountainous Catalina Marathon with a 2:46. In April he produced a fine 2:27 at Boston, and only two weeks later hammered out a 5:18 fifty at Yakima, Washington. Then began what was surely an awesome streak of physical punishment. One week after Yakima, he tried for the American track record for 100 miles. He ran for 30 miles in 100 degree heat, before retiring to wait for better conditions. A week later, he and a fellow San Diego runner competed in a 24 hour relay as a two man team. They achieved 154 miles, with all of Frank’s 77 at a sub six minute pace! Five days later he was at the Huntington Beach 24 hour run to go head to head with Park Barner. After lapping the field several times, he stopped to find out how far ahead of the pack he had gotten. when told by the officials that they thought that he was about one half mile ahead, he walked off the track in frustration. Apparently no one had been keeping very close tabs on his laps. With a veritable free-for-all underway, Bozanich decided to come back to the track and do a long training run, covering over 80 miles. Unperturbed, he decided to enter the Western States Endurance Run, a 100 miler only two weeks away. After chasing for two-thirds of the way, he succumbed to the nasty downhills that characterize this Sierra classic. Having done no trail or hill running in training, he hobbled in sixth.

By September he was recovered and fit and ready to do battle once again. He ran a 3:03:09 at the National AAU 50 km championship in Brattleboro, Vermont and, one week later on his way home, he won the Copper Harbor 50 miler in a P.R. 5:05:35, then the second fastest time ever run by an American, battered only by Allan Kirik’s 5:00:30 record run at Lake Waramaug. Back in Seattle, Bozanich’s thoughts turned to a national 50 mile championship to be held on the shores of Lake Washington. with only three weeks of recovery from his borderline run at Copper Harbor, he sat back and waited for 42 miles. When he sensed the kill, he increased his tempo steadily to overtake the rest of the field and win in 5:32.

This burly, strongman of the ultras is many things to many people. Many see him as a cocky showman, still trying to prove he can run tough. And many are intimidated by his go-for-broke tactics. But there is a side to Frank not seen by most runners at races, a man devoted to his children and his wife. Ultramarathoning would not be what it is in America today if it were not for his efforts. He has shown, by his own fine quality performances, that ultras are legitimate road racing events. His career seems to have lasted forever, probably because he has run well so many times. but actually he is still relatively new to ultra-running, and still has the fire and determination to excel. Ultrarunners must of necessity be a stubborn and confident bunch the difficulty of the events demands that one not be a quitter by nature. In a recent conversation we discussed his training and goals for the future.

Ultrarunning: You’re headed to the TAC 50 km nationals. What do you hope to run there?

Bozanich: I’m going for a win. not time. I’ve found in the past that it doesn’t really pay off to set a certain time goal, especially in the nationals. I’m just going to play it and try to win.

UR: How has your training changed since you’ve gotten out of the Marine corps?

Bozanich: I’ve cut the mileage back quite a bit, mainly because I don’t have the time I had there. The job I’m working now is not as dependable for running time compared to the hours I had in the Marines. I’ve gone back to just running in the morning and then again in the evening.

Bozanich: Probably some good quality work. I don’t go out and run the real long runs on weekends. I think my longest run in training ever has been between 25 and 30 miles. And even then, I don’t run those too often. A couple of times I’ve done a 40 mile run easy. The longest race I ever did before my first so miler was 50 km, and the longest training run only 25 miles. I think the really long training runs just break you down. If you are going to go out and do 40 or 50 miles in training you’re going to have to be slogging along for most of it. I’d just as soon save all that energy for a race.

UR: I read somewhere that Cavin Woodward feels basically the same way; his longest training run was about 25 miles one time when he got lost.

Bozanich: Don Ritchie (holder of the world records for 100 miles on the roads (11:51) and on the track (11:31), Ed.) is the same way. He and I had some long chats when he was out in California and when I was in New York for the Unisphere 100. We went on some training runs together and he told me that his longest run is never over 50 km. with him though you see he’s going at a pretty solid effort on those long runs. I feel the same way; I don’t want to go out and be bored; besides, I’ve got a family and weekends can’t be just for running. I’ve got to work an 8 hour day, and so on weekends I usually have things to do around the house. I don’t have a job that allows me to train whenever I want.

UR: Ultras are a real mental drain. Do you think there’s only so much mental energy one has for flogging it at these distances?

Bozanich: I think any race can become a mental drain, especially an ultra, because you have to go through the physical thing. My best year was probably 1979 when I did several ultras. It got hard to get up for a lot of them. I think a lot of people expected me to be up at the top all the time. I believed in going out and giving them a good race, although sometimes I felt like taking it easy and I’d start out that way and then the competitive thing would get to me and I’d come from behind hard. I did it for a year and then in 1980 I backed off. I just said, Hey, the body can just take so much. You can go out and run 10 km’s every weekend and get away with it. But if you start doing 50 milers, 100 k’s, 100 milers or what have you, it really drains you. In 1980 I ran Biel (Switzerland, 100 km) in June in 7:30 on a tough course. I had wanted to do better, so I wasn’t all that pleased with it, but I came back one week later and ran the Old Dominion 100 miler. Old Dominion is a very gruelling course: I ran it in course record time. I felt that if it had been on a flat course, the time would have been somewhere in the neighborhood of 12 or 13 hours.

UR: What distance do you think you are best at now?

UR: What are your long range goals?

Bozanich: Right now, I would just like to continue to run well. I would like to run the national 50 miler again next fall.

UR: You seem to have mellowed out quite a bit in the past year.

Bozanich: I think I’ve mellowed out really since I’ve gotten out of the Matine corps. They build a very competitive person: they’ve got to. If you go into combat and you are not prepared, it will be dangerous, more than it has to be. I’m like that when I get on the road. I enjoy running. A lot of people labeled me when I was in the Marines. They figured that if I was an officer in the Marines, I was The Animal. It really wasn’t me. I enjoy the people at races, going out afterwards and having a few beers.

UR: What runners do you idolize, if any?

Bozanich: In ultras, Don Ritchie and Cavin Woodward. They’ve both been at it a long time. Don has proven himself well many times. He’s set records, and he runs tough every time out. He would never back down from anything. Ian Thompson is a very fast man. I’ve said it before, Barney Klecker’s record is going to fall as soon as some of these really fast marathoners start to move up. Look at what happened in the marathon when the 10 k guys moved up.