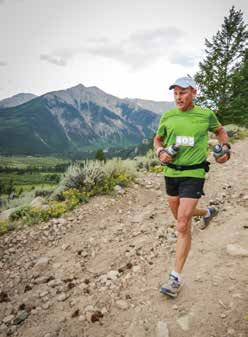 With his 28-hour finish at last year’s Leadville 100, Bill Finkbeiner has now completed the race 30 consecutive years, beginning in 1984. Needless to say he is the only 30-time finisher of Leadville, or for that matter, any 100-mile race. He also has a running streak that dates back to 1980. At 57 years old, Bill has run well over 150 ultras and doesn’t seem to be stopping anytime soon. We were lucky enough to corral this 100-mile legend and ask him a few questions, and he shares insights that all active and aspiring 100-milers can learn from.

UR: How do you get prepared for Leadville every year?

BILL: My preparation/training is a lot different from my early years of running. In the beginning, running was a higher priority and I justified a lot of time for training. My wife, Beth, and I met at the Buffalo Chips Running Club. Before kids, I worked a 40-hour week, had a small house and yard to maintain and a girlfriend-then-wife who also spent a lot of time running. In the spring of 1996, when my son Christian was two-and-a-half years old, I had to pull out of the Western States 100 because of a knee injury. I’ve never trained like those early years since. Instead of 100- to 150- mile weeks leading up to the summer hundreds, my biggest week this year was probably under 45 miles (except for the weeks that included AR50 and LT100).

UR: How have you maintained your health and fitness through the years?

BILL: My training in recent years consists of maintaining my daily running streak (every day since Jan 1, 1980) by running a two-miler before work and trying to run long on each weekend if possible. The big difference between running my first 100 and now is that when one runs their first, they dedicate the season to preparing for it, whereas now, I try to dedicate July and August weekends to it. My lack of training has probably helped to keep me sound all these years, though. I assume that if I tried to resume 125-mile weeks, I would have injuries.

UR: What was your best Leadville 100 ever? What year was your toughest?

BILL: My best time and place at Leadville was a third overall with a time of 20:30 in 1992. That was the year I ran the “Western Four.” I had a great season with a seventh overall at WS, third at Leadville, third at Wasatch, and fifth at Angeles Crest. My toughest Leadville was five years ago when I was attempting my 25th consecutive. One month and a day before the race, I pulled my hamstring while scrimmaging with my (at the time) 11-year-old daughter, Rachel’s, soccer team. As I felt the spasms and tried to stay on my feet, I was already thinking the streaks were over. I was able to get off the field on my own, but just barely. I (stupidly) maintained my daily streak and ran about a mile and a half each day until race day with very short strides. My first real test was the race start. It hurt (a lot) within the first three miles and I spent the entire race not knowing if it would hold up or not. That is the only year that I wasn’t confident that I could keep going to the finish.

UR: How did/do you overcome obstacles and challenges to completing the race?

BILL: I would never recommend streaks to others but it’s a mentality that keeps me going without considering a DNF. I’ve told myself many times (especially at Leadville) in the middle of the night that, “I’m not dropping out without a medical emergency but I don’t have to come back next year.”

UR: How has Leadville 100 (and ultrarunning for that matter) changed over the years?

BILL: The biggest change I notice in ultrarunning is the number of participants and the younger runners. I used to go to a race and know a very high percentage of the field. Now I stand around with the other old guys and talk about how we don’t know anybody. The thing that has stayed the same is the type of person who runs ultras. There is still camaraderie, caring, and mutual respect between the participants. Having been at both ends myself, I see the faster runners respecting the 30-hour effort by some, and the 30-hour runners respecting the ability of the top runners. Personally, I have a ton of respect for the runner who crosses the finish line over the time limit, not expecting any material reward. That takes toughness.

UR: How do you prepare to run at such high altitudes, especially considering you live near sea level?

BILL: Obviously, the thing that makes Leadville tough for most of us is the elevation (combined with the 30-hour time limit). Living at 85-feet elevation for my first six Leadvilles and at 1,234 feet (which still may as well be sea level) for the rest, is the biggest challenge. I have an advantage over many in that at least I can drive up to the summit of the Sierra Nevada Mountains in just over an hour to train at “elevation.” The problem is that those peaks are mostly lower than the low point (9,200 feet) of the Leadville course. Running the Pacific Crest Trail and other trails near the Sierra Nevada summit in July and August, when it is springtime up there, makes a few hours of pain at Leadville well worth the trade off. While the foothill trails where I live are drying out with dust, star thistles and poison oak, I’m at the summit running through wildflowers looking at fantastic views and topping off my water bottles with snow.

UR: What advice would you give first time 100- mile runners?

BILL: My advice to a first-time 100-miler would be to find a training partner or group with the same finishing goal. Other than my very early ultrarunning, I’ve always been blessed with committed training partners for my long runs. I realize it was an advantage for me to live in a part of the country where trail ultrarunning has been so big.

UR: What is the key to your training?

BILL: My attitude has always been that the training is the work and race day is the reward. That is, I don’t want to approach the race thinking that race day is the big test of my preparation. I want to see the race as the reward for that training, and try to envision it as the final lap of the training season. I think that attitude helps me get through the tough training runs. When I have a long training run that trashes me, I like to just look at it as “getting that bad one out of the way now instead of on race day.” It lets me appreciate the worst runs I’ve had.

UR: What is your nutrition strategy and how has that changed over the years, if at all?

BILL: I’ve always liked to eat some real food during 100-milers. Grilled cheese, pancakes, and cheeseburgers almost always taste good to me during a 100. At my first WS, in 1983, my sister brought tuna sandwiches to Michigan Bluff. I didn’t think I could eat it but it worked so well, I ate them during races for years after. They were moist and salty, easy to eat. Now, there are so many choices and although I still like to eat the real food, I always want to have something easy to carry to keep going between aid stations. I know that a gel will get me going in just a few minutes if I start to feel out of fuel, especially if my stomach isn’t allowing me to put much volume in it.

UR: What else would our readers like to know about you?

BILL: As far as non-running interests, I’ve got my family: Beth (WS and Leadville finisher), my 19-year-old son, Christian (10th place finisher at Way Too Cool 50K as a junior in high school), and my daughter, Rachel (non-runner, basketball point guard). I’m a landscape contractor and collect old cars. When things are going badly at around 60 to 80 miles, I often think about how my old car hobby looks especially good!