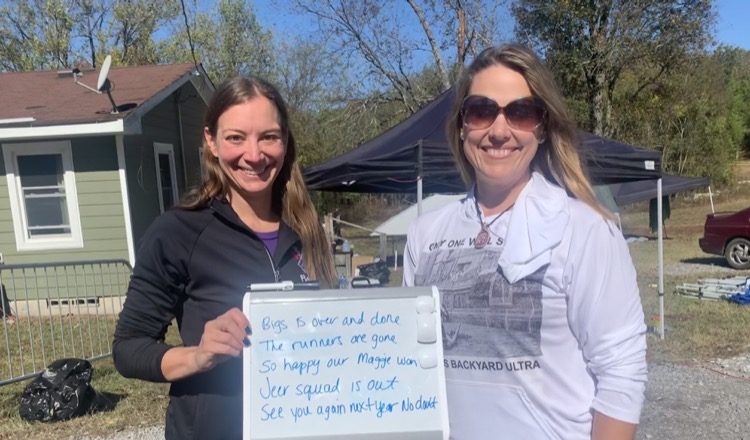 For 60 hours, Maggie Guterl lined up ready to start either a 4.166667-mile trail or road loop every hour, on the hour. But what happened in those furious 9-12 minutes between each finish leading up to the next start, tells an incredible story of teamwork with some gold star skills.

Part of Maggie’s preparation for Big’s Backyard Ultra was to ask Gina Fioroni to crew for her. Gina is no stranger to ultras and sleep deprivation, so she was ready for the long haul. When Maggie mentioned also crewing for Amelia Boone, Gina knew they would need another crew addition and Jenn Coker cleared her schedule to join them.

Maggie raced at Big’s in 2018 and knew what it was going to take to be successful this year. Sure, many toeing the line have run incredible distances yet, for the final few left standing, one of the obstacles is less about the mileage itself and more of a race about sleep deprivation and nutrition. 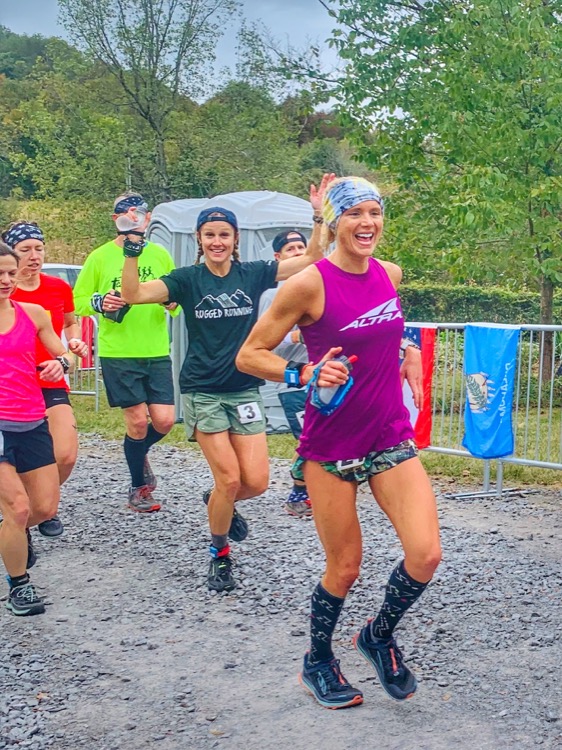 Hour after daunting hour, knowing the importance of nutrition, fueling was a priority focus for “Team Sparkle.” Maggie’s base calories consisted of bottles of Tailwind that she would take with her, and then supplement with more savory foods at the start/finish. Those consisted of pierogis, mashed potatoes, “fancy’” ramen, grits and waffles. She then consumed caffeinated Tailwind during the night hours, but stopped during the day. Her protein came in the form of the Tailwind Rebuild Recovery at night, knowing it would be easier to get down in the evening. Gina paid close attention to see if Maggie was going too many loops without wanting solid food (especially later in the race) and would, at the minimum, have her take small bites.

Articles, podcasts and interviews will continue to applaud Maggie’s incredible accomplishment of running 250 miles, but there were truly two items that stood out as highlights when speaking with Maggie, Gina and Jenn. First and foremost, it was Maggie’s finely-tuned nutrition details. Her ability to think through what she was consuming, no matter how sleep-deprived she became and do what few ultrarunners do skillfully, helped her make changes throughout the race to stay in balance. For instance, on day two, she told me that when she would eat Ramen soup she would only take plain water with her on the loop knowing that a bottle of Tailwind would be too much sodium. Her knowledge of what her body needed and what each available product contained, allowed her to stay the course of feeling great for 60 hours and ready to go into a fourth day. And, secondly, just a few days after being up for over 60 hours while cleaning, prepping and crewing for Maggie, both of her crew members were on board for next year because, they said, “She was an absolute pleasure to crew for.” Jenn noted that Maggie and Amelia were so kind and thankful, no matter how tired they were.

Maggie had an incredible race, but it wasn’t without some “sparkle” in the form of Gina and Jenn, and it was a skilled team that kept her on plan and running to victory. Stay tuned for more details on Maggie’s nutrition as well as what the crew ate for 60 hours to stay so positive while performing double duty at Big’s Backyard Ultra, in the February 2020 issue of UltraRunning Magazine.

Meredith Terranova has a B.S. degree in Human Nutrition and has been helping her clients reach their nutritional goals since 2004 at her consultancy, Eating and Living Healthy. Meredith recently completed her third Ultraman, and has raced over 50 ultramarathons with several wins and podium finishes. She and her husband Paul Terranova live in Austin, Texas, and enjoy a lifestyle centered around endurance sports. Learn more by visiting eatingandlivinghealthy.com.