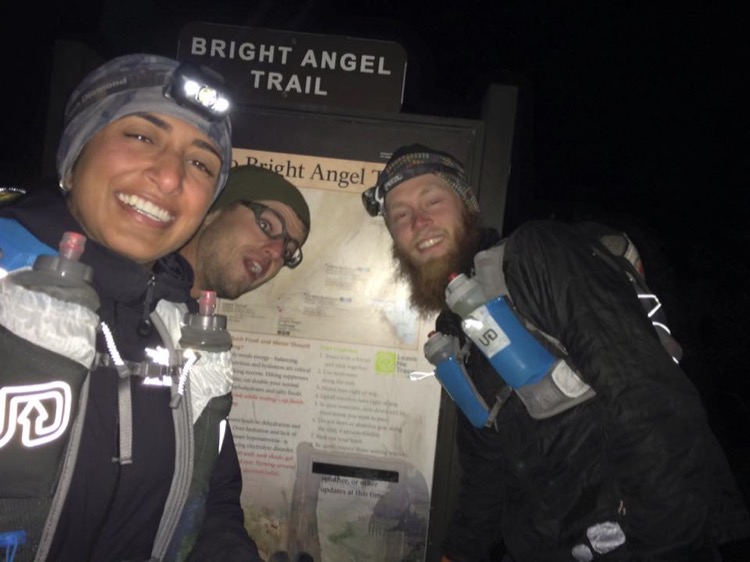 The Grand Canyon and What It Means to Move Through It

Anyone who has traveled into the Grand Canyon understands the great immensity of what they have entered into. You don’t really go into the canyon, it swallows you whole.

Perhaps what makes the canyon so mysterious and alluring is its inability to succumb to the modernization of man. It’s not that man has been putting off developing this area, in fact, we’ve tried pretty damn hard, and in some ways succeeded. (Some of the sights at the developed South Rim would surely make Ed Abbey roll over in his grave.) It’s just that the canyon itself, by nature, refuses to allow man to control it. There are no roads into the canyon, the trails out to either rim go up for a long, long time. Indeed there are plenty of campsites and potable water, but if you go into the canyon, it’s under the general understanding that you’re going to dig yourself out.

The Rim2Rim2Rim is likely Arizona’s best known self-supported run. It’s the most simple and obvious line that takes two trails from the South Rim down to the Colorado River, up to the North Rim and back. It’s a committing, and at times quite daunting task that tests a runner’s full range of skills and self-dependence. The commitment factor of the canyon is what sets it apart from so many other ultras. If you start it, you’re pretty much committed to finishing under your own power.

The first half, crossing south to north, is quite physical. The second half, retracing your steps back to the South Rim, is mental. Upon reaching the North Rim, you hesitantly turn around and face the reverse route of the 24 miles you just crossed. Luckily, the beauty descending from the North Rim is inexplicably gorgeous. The second half is when the canyon takes on a persona, its walls speak and seem a bit tighter than before, a bit steeper, a bit more vibrant. Once you descend from the North Rim, you have sealed your fate as an R2R2R traveler; you just have to put one foot in front of the next for a while. The scary part isn’t the idea of quitting, it’s that quitting is quite literally not an option. As you cross the Colorado River for the second time, the sun is setting. The canyon walls turn vibrant shades of pink, yellow, orange and purple, and you begin putting your warm layers and headlamp back on. The 4,000 foot, 8 mile climb out of the canyon in the dark to finish R2R2R is arguably the crux of the route. As night sets in we lose sight of the South Rim and are left with the 10 feet of vision that our headlamp allows. In those moments, I lose my identity.

Neha, Wilson, and Andrew at the North Kaibab trailhead half way through their journey. Photo: Neha Khurana

So what does it mean to move through a place like this? What does it mean to push yourself and feel the canyon pushing back? Well, I’m not really sure. There’s a common stigma about going into these types of things that they will be life changing, romantic, and epic, and maybe in small doses they are. But it generally just amounts to people being pretty exhausted in desert climes. So I don’t really have a good answer as to why we do these things, it’s just that we must.

Yesterday I finished the run. As I rest up, I can’t help thinking about the hundreds of canyons that are as deep and as grand as the Grand Canyon, the likes of which will likely never be fully explored let alone turned into a National Park. Additionally, that my crossing and recrossing of the canyon showed me a pretty groomed, red-carpet view of the place. Of the 48-ish miles I saw, there are still thousands of square miles that remain empty, unwalked, undeveloped, untouched, and pure. Each day those thousands of miles of untouched canyon are singing. Thank goodness for that.