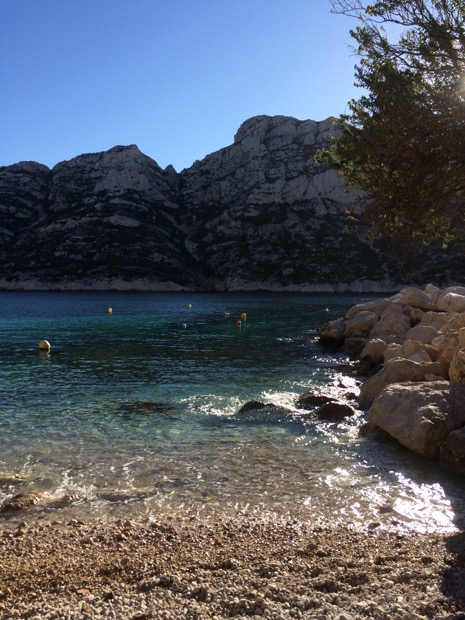 If you were to visit or see pictures of the area slightly south and east of Marseille, France, which is now known as Parc national des Calanques, or Calanques National Park, you would very probably be more than a bit surprised to learn that the magnificent cliffs, mountains, trails, islands, and marine areas were granted national park status only recently: three years ago in April of 2012. If you were savvy to the history of the national parks of France, however, you would likely be much less surprised. Indeed, the country has a limited number of parks—10 in total but just seven of those in mainland France with the other three in overseas departments—and France established its first national park in 1963, merely 52 years ago. By comparison, the United States, although it is roughly 14.5 times the size of France in total area, presently has 59 national parks and established its first, Yellowstone, in 1872—a full 91 years before France.

Flora within the park

It might be reasonably said, then, that the French were somewhat behind the curve compared to the United States in establishing national parks. But given some of the criteria for national park selection—such as natural beauty and recreational opportunities—it remains somewhat of a mystery that the Calanques, which means “creeks” in English, were not preserved and protected as a national park until so recently. Of course, the movement to garner national park status began in the early 1990s and the area has been protected environmentally to some extent since 1975. Alas, in 2012, Parc national des Calanques became France’s tenth national park and its first mainland national park since 1979. As a national park, the Calanques now receive the most extensive protection of its land and marine areas, which amounts to some 201 square miles of land and sea.

Cliffs jutting out of the sea

The park contains an immense amount of diversity in its plant life, animal life, and geography: around 900 plant species exist in the park; it serves as a habitat for a species of eagle, the largest lizard in Europe, and the longest snake; its towering cliffs, which drop around 350 meters (1,150 feet) into the sea in some places, prohibit water access while pristine beaches nest in coves elsewhere; along the 20 kilometers of coastline hundreds of summits exist with the highest standing at 432 meters (1,420 feet). This range of diversity brings with it immense opportunities for outdoor activities: kayaking, sailing, rock climbing, hiking, running, camping, wind surfing and more. The Mediterranean climate of the coast keeps temperatures temperate to warm most of the year, cooler during the winter, and hot during the summer, which means that activities in the park are possible all year, except during park closures due to fire or wind in the months of July and August.

The recreational opportunities that the park affords, coupled with the warm weather, the miles of idyllic coastline, and the unparalleled natural beauty, make Calanques National Park a destination for up to two million visitors per year. Its proximity to Marseille makes visiting relatively easy: the park is just 13 kilometers (8 miles) from the city center and the commute is neither too long nor too cumbersome.

Trip Tip: In Marseille, take the M2 metro to the Rond-Point du Prado stop. Exit the metro and immediately find the Rond-Point du Prado bus stop. Take bus number 23 to the La Cayolle stop, which is near the end of the bus line. This trip by metro and bus should take around 45 minutes in one direction. Once you exit the bus at La Cayolle, walk east and go directly across the rotary. This road continues for another three kilometers (almost two miles) until it terminates at one of the towns within the park on the beach, Calanque de Sormiou.

Once you reach the La Cayolle bus stop—the closest stop to the park by public transportation—follow the road called Chemin du Sormiou for just 1.6 kilometers (one mile) and after the short, steep climb up the switchbacks, reach the Col de Sormiou. This high point offers the first views of the Mediterranean, with the Calanque de Sormiou in view below, and several trails can be taken in any direction. Meander down the steep trail toward the beach or turn north or south and traverse through the park toward the summits and cliffs: hundreds of miles of rocky, rugged trails exist and can be explored for days.

Trip Tip: Many small roads wind through the Calanques and make its towns accessible by car. Cars are not allowed in the park between May and September, but otherwise you can drive to the park for a single day or multi-day trip. If you decide to bring a car, be careful: break-ins are a common threat in the park.

Several small towns are tucked into the Calanques and can be visited for a night of sleep, a meal, or a day at the beach. Start your park research at their website (http://www.calanques-parcnational.fr/en) and for complete information about the park and its available accommodations and activities, use a guidebook such as Lonely Planet to plan your days of adventures.