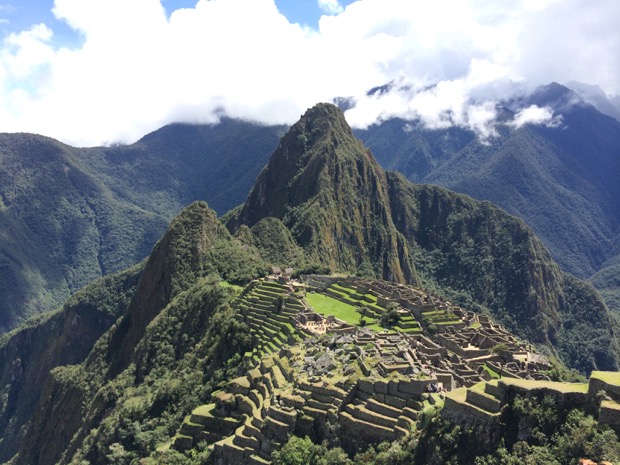 Hiking To Machu Picchu: A Half Step Into The Past

The Incan Empire consisted of hundreds of thousands of square miles of land; its population blossomed, on some estimates, to as many as 37 million people; its system of trails and roads are believed to be as extensive as 40,000 kilometers in length; and its agricultural, architectural, and engineering techniques and methods would be considered beyond impressive even today. Yet the Empire existed long ago and for less than one hundred years—from 1438 to 1533; many of the relics that illustrated their advances in the fields of engineering and architecture were destroyed by the Spanish while, in all likelihood, other feats remain undiscovered, especially considering this: one of the Incans most magnificent and marveling achievements, a small city called “Machu Picchu,” was not discovered by non-Incans until 1911. How and why the small city remained dormant for so long, and why it was built at all, can now only be theorized about since—to make the Incan Empire and its accomplishments more opaque, mysterious, and amazing—the Incans did not have an alphabet or, thereby, an official written language!

Today, it is quite easy, though still time consuming, to access this previously lost and forgotten city by train and bus. For a somewhat more authentic experience, however, one can take a step into the past by retracing several dozen miles worth of ancient trail through the Andes to Machu Picchu. I had the fortunate pleasure of traveling along one of these routes during a five-day, four-night trek. This is an account of, and reflection on, that experience.

How To Get There: Cusco, Peru is the former Incan capital that today serves as a base camp, perched in the thin air at 3,400 meters (11,200 feet), for treks into the Andes toward Machu Picchu. You will first need to fly to the Peruvian capital of Lima and then onto Cusco from there. There are very probably as many trekking companies in Cusco as there are stray dogs—and that’s a high number!—but Llama Path is a reputable company that offers several treks at reasonable rates. Visit llamapath.com for details.

I was told that we were at an altitude of over 12,000 feet and my lungs knew it was true but my eyes remained dubious: I’ve spent a fair amount of time at high altitude, and when I’m above 12,000 feet I expect to see sparse vegetation and considerable amounts of snow, no matter what the season. Yet here I was, rain-soaked and surrounded by vegetation, in the middle of the Peruvian Andes. Ultimately, my lungs and the dull headache that was forming managed to convince my eyes of the altitude and I kept forging slowly upward with the seven others—including our guide, Silvio—that constituted the group I would cover around 60 kilometers (37 miles) with over the next four days. The trail eventually leveled off and the hiking became easy but the rain didn’t stop and I quickly realized why GORE-TEX is the rain jacket of choice: my sister was wearing one and I wasn’t and after an hour in the rain I was becoming damp while she was as dry as when we began. The clouds cloaked the high peaks and forced our eyes toward the lush valley below that swallowed the buckets of rain that fell continuously.

“I should have spent more money on a rain jacket,” I kept thinking, and the sky seemed to hear, and to laugh, and to rain harder. The Incas would have prayed to the Sun God or made a sacrifice in his honor. What would the Incas have been wearing in this torrential downpour? Maybe I didn’t need a nicer rain jacket, after all; maybe I should pray to the Sun God. With just 8 kilometers (5 miles) to cover, the first day was complete by lunch hour and I passed on the optional afternoon hike to rest up in preparation for the next day: 24 kilometers (about 15 miles) and a high point of 4,600 meters (about 15,100 feet). The rain continued to fall through the night.

Coca is a plant native to western South America. It’s most well known because of one of its ingredients, alkaloid, which is used in cocaine. But the plant had a much more benign purpose for the Incas—and for present-day Peruvians—and they revered the plant and its leaves for its effects as a stimulant. Coca leaves, when chewed, help to placate hunger and thirst and minimize altitude sickness and fatigue—all beneficial consequences for those existing and exerting themselves at high altitudes.

“Align about ten leaves and then roll them together, like this,” Silvio, our guide, explained and illustrated. We were above 13,000 feet now but we still had another 2,000 feet to climb. It is nearly five hundred years since the fall of the Incan Empire, yet their medicinal methods are still proving successful: local Peruvians continue to chew coca leaves today and routinely haul cargo over dozens of kilometers through the Andes in a single day without food or water. We had food and water, but I quickly learned, and appreciated, the benefits these leaves can afford. We carried on, with our eyes turned upward to the massive Salkantay Mountain and its glaciers, enjoying the warm, sunny morning. The enjoyment was short lived as clouds rolled in, the temperature dropped, the air became ever thinner, and the climb dragged on. Alas, dimly lit and cloud-laden, Salkantay Pass presented itself in the early afternoon. Fifteen more downhill kilometers set us apart from this high point and our nightly lodgings: we passed between glacier fields and into idyllic pastureland; we walked along a rocky streambed in a warm valley; we trudged through muddy trails in the jungle and we arrived in a small town near a rushing river and a wide, dilapidated dirt road. Just two more days of hiking and then we would see Machu Picchu.

The final two days of the trek continued blissfully but not without difficulty: thirty more kilometers of hiking followed by a short train ride, a pleasant night in a hotel, and a bus ride to our final destination, Machu Picchu. Even today, it takes much time and effort to arrive (primarily) by foot at such a remote place—but rightfully so. Situated some 400 meters (about 1,300 feet) above the river valley, Machu Picchu is hidden from below; nestled between two small mountains and swallowed in the clouds for much of the day, the miniature city is often invisible from higher vantage points, too; resting between two fault lines on steep mountain faces, a waterfall, rather than an ancient city, seems a more likely inhabitant for this remote and challenging location. Despite the many difficulties and challenges associated with accessing this isolated and secluded area, and with engineering and constructing an architectural masterpiece to boot, the Incas succeeded in piecing together a small paradise in a treacherous nook of the Andes.

We arrived to this now oft-visited wonder in a bus that traveled along a sizeable road after spending comfortable nights on sleeping pads in tents; the Incas would have bushwhacked up the steep slope after sleeping in the jungle. It took four full days of hiking before we arrived near our destination, and we had the help of modern-day transportation at the end—not to mention gourmet meals prepared by chefs during our hike; the Incas hiked the entire way—and further than our 60 kilometers—in almost half the time without the luxury of chefs and gourmet meals. We walked around the remarkable but uninhabited city leisurely for just a few short hours; the Incas moved massive chunks of stone to build Machu Picchu’s terraces and buildings without technological advances as basic as the wheel. Hiking to, and visiting, Machu Picchu is taking a step into the past—but not a full one. We are only capable of partially revisiting and understanding this ancient and sacred place since we visit their world under much different circumstances: we take their ancient routes with our modern equipment; we marvel at their accomplishments only briefly; we partake in some of their ancient traditions but we do not really understand them. In short, we step into their old world with our modern conveniences—and that makes it hard to really understand and appreciate what they accomplished.

In visiting Machu Picchu, two very different worlds, ancient and modern, clash. A journey through part of their former Empire is a study of juxtapositions and contrasts; the differences between then and now are humorously stark. If you have the unique privilege to journey to this ancient Incan city, you will be fully hypnotized with marvel and wonder if you recognize how strenuous it is, even today, to access this remote site; you will begin to appreciate the remarkable accomplishments of these people properly when you consider how quickly and ingeniously they were able to construct a modern city in ancient times. Pictures of Machu Picchu are awe-inspiring and beautiful, but the place becomes magical only when it is appreciated for what it is: a true masterpiece built tirelessly by a brilliant people.

” It’s most well known because of one of its ingredients, alkaloid, which is used in cocaine.”

Cocaine is actually the active chemical in the coca plant — it isn’t as potent when chewed because the cocaine that is the illegal drug is a concentrated version. Alkaloid is a term for a class of compound

Sean, thanks for making that distinction, which I was unaware of!
Cheers,
-Eric

How many days did this take, from start to finish?

It was a 4-day hike. However, the guiding services in Cusco offer a variety of hikes varying in distance and length.