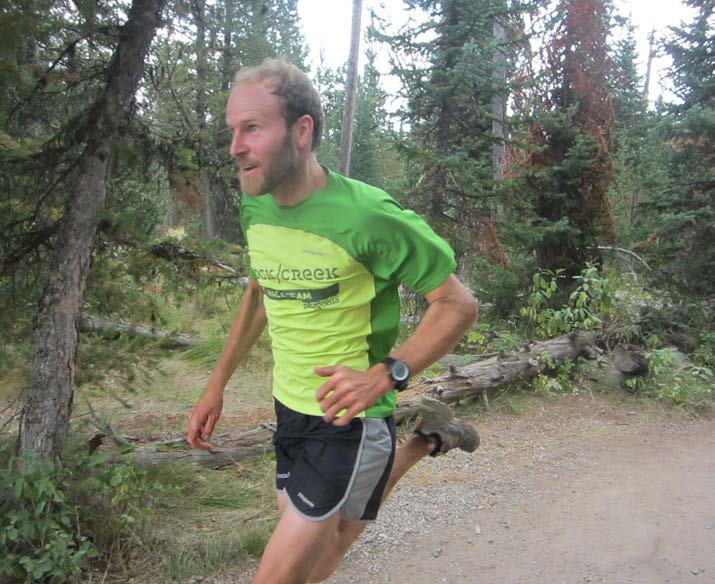 During dinner at the Mammut sales meeting, Dave, the company’s hard goods manager, turned towards me and shouted, “That’s insane! The Grand Teton in under three hours?” Lots of laughter ensued, some of it directed at Dave’s outburst but most at how red my face and balding head had become. Dave moved down to my end of the table, and sheepishly I told him about my plan to run up the Grand Teton, and then back down as fast as I could.

During the summer of 2012, I got a few days off from work and drove to the Tetons with my family and my friend Jess Asmussen who also wanted to try to run up the Grand Teton. I knew that Kilian Jornet had just broken the record and the three-hour mark about 10 days prior, so maybe the record was out of reach, but I still wanted to try to break three hours. We left work on Sunday night after a Longs Peak patrol (I work as a Park Ranger), drove a few hours, camped, and then drove the rest of the way on Monday. As three adults, a two year old, and all our camping and climbing gear exploded out of the little blue Prius in the Tetons, we must have looked like a clown car, and smelled like a horse stable.

While my wife and Jess climbed on Tuesday, I played in the river and ran around with our son. I went to bed early and woke up feeling refreshed on Wednesday morning. Jess started up the trail early because he wanted to climb/run the upper section of the Owen/Spading route with me. He planned to meet me at the upper saddle and was hoping that I remembered the route to the summit from there.

I left my wife and son by the river and jogged over to the Lupine Meadows trailhead to warm up. The last time I had been there was 10 years prior, but it seemed like yesterday to me. I did some warm-up strides in the parking lot then started my watch as I ran past the sign towards the Grand Teton. I carried a few Clif Shots and Clif Bloks and wore a T-shirt, and a pair of shorts. The first half-mile flew by, and then the uphill began. I came out of the forest onto the start of the seemingly endless switchbacks leading up to Garnet Canyon. Dashing from shady spot to shady spot, I reconsidered my post 9 a.m. start and my lack of water. The sun quickly burned away all my concerns about drinking unfiltered spring water. Giardia doesn’t survive in the sunlight, right?

I made it to the entrance to Garnet Canyon in about 38 minutes and then remembered the meaning of steep. Here the “trail” becomes the path of least resistance through piles of scree, loose dirt, boulders, and glacial till. I also realized that 10 years is a long time and my memory may have neglected to preserve some of the details of the route. I did not remember scrambling over boulders this big up a creek. Then I noticed the “trail” was about 20 feet to my right.

The watch says 2:53 and the smile says the rest—a new FKT.

Back on the trail, I was running along a ridge of loose rock amongst the craggy Tetons. I could not help but laugh and add a little more spring to my step, until I sprung right into a rock with my shin. With blood welling out of my shin, self-pity and doubt started to push my elation towards the back of my head. Then I heard “Yeehaw, come on Andy, you got this!” There was Phillip, one of the climbing rangers and one of my best friends since the age of 12. His shout brought back the runner. I was feeling the fire in my belly again. I ran by and gave Phil a high five as he and his climbing partner cheered me on.
At the end of the moraine, I Batman-ed my way up the fixed lines to the lower saddle and flew across this one level spot to the gullies leading to the upper saddle. As I ran, I heard a guide shout “the record’s 2:54” as if I had no chance at it. Argghhh. Stubbornly I pushed harder and I looked at my watch which showed just past 1:20—holy cow I was still on pace! As I reached the upper saddle, I could hear Jess hollering and cheering for me. We crossed the Belly Roll and scrambled up the Owen Chimneys. Again my memory failed, and I ended up off route to the left while Jess cruised along the standard route, but no time for anything but up, up and up.

We both hit the summit benchmark at the same time where my watch read 1:48—a new ascent record! My shout woke up some napping climbers who nonchalantly asked, “So what are you guys doing tomorrow?” Turning too fast to answer, we started back down. I managed to stay on route down climbing from the summit. Back at the upper saddle Jess and I parted ways as I took off down the mountain.

As I came back through the Lower Saddle the guide again quoted the record, but this time added, “You got it, go, go, go!” Down the fixed lines, along the moraine I ran. This time I heard my friend Phillip yelling encouragement from high on a wall above. I picked my way back through the boulder field near the Petzolt Caves and back down to the entrance of Garnet Canyon. The watch read 2:30:30.

Only 23:30 remained for me to run the 4 miles back to the start. I threw caution to the wind and ran as if I was racing a 5k down the trail. I careened around switchbacks sometimes sliding out into the dirt and rolling around the turns. I sprinted the straights past the guided climbers, past hikers looking on in terror as a dirty, balding cackling middle-aged man flew past in a cloud of dust and sweat. I made it back to the last half mile of relatively flat trail thinking I only had seconds to spare. All I could do was focus on making my legs move faster. Near the trailhead my wife and son were cheering and yelling. There is nothing like the admiration and cheers of your two-year-old son to bring out the best in a dad. I passed the sign and stopped my watch thinking I had just missed the record. Then I looked down at the time: 2:53:02!

I ran back to my wife and son with a huge smile and feeling great.