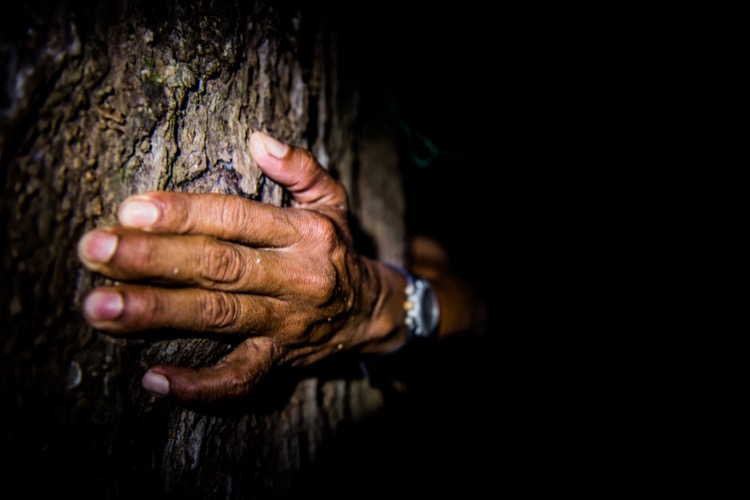 In a world of Fastest Known Times, course records and Strava segments, there is one race that shatters everything we know about our sport. One that takes place on a mystical island that is just as alive as this event makes you feel. Where everyone is equal no matter your gender or where you’re from and where physical and mental strength are the smallest part of what is needed to complete this course. The Fuego Y Agua Survival Run in Nicaragua is not just an ultra race but also an experience to test your spirit. This run takes you over two volcanos while traveling around the island of Ometepe completing tasks that imitate daily local Nicaraguan life. It forces you to adapt to the challenges you face as you run 60 miles through a brutal course and the chances are that you will not finish. 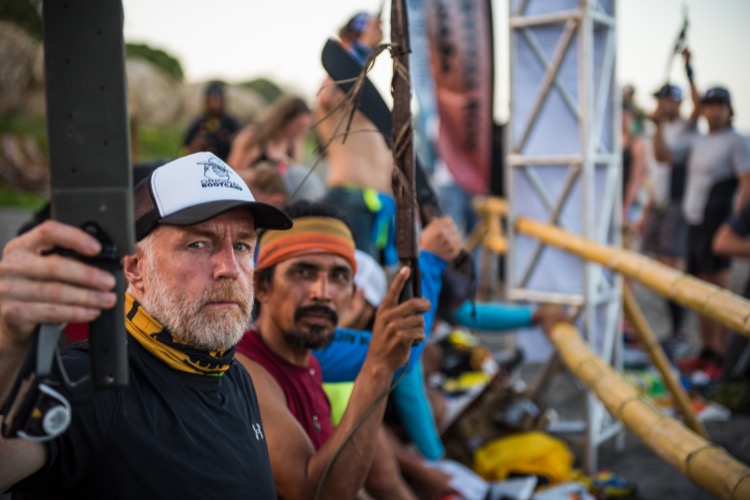 I stood perched atop a set of stairs that overlooked the beach. Race staff milled about and began to gather on the warm sandy shore of Lake Nicaragua. As daylight quickly began to fade, I watched as racers enjoyed a spaghetti dinner with their families while waiting for packet pick up to begin. Little did some of these people know, but packet pick up and the start of the race were one in the same. With bellies full of food, runners arrived one by one at the beach to have their mandatory gear checked, receive their bib numbers and their first instructions to the begin the race. With many unknown challenges ahead, looks of focus and determination covered many of the runners’ faces, while nervousness and uncertainty overtook many others. Ian and Alexi hold their machetes high in the air to signify that they are ready to have their race kits checked for all mandatory gear. Photo: Tyler Tomasello 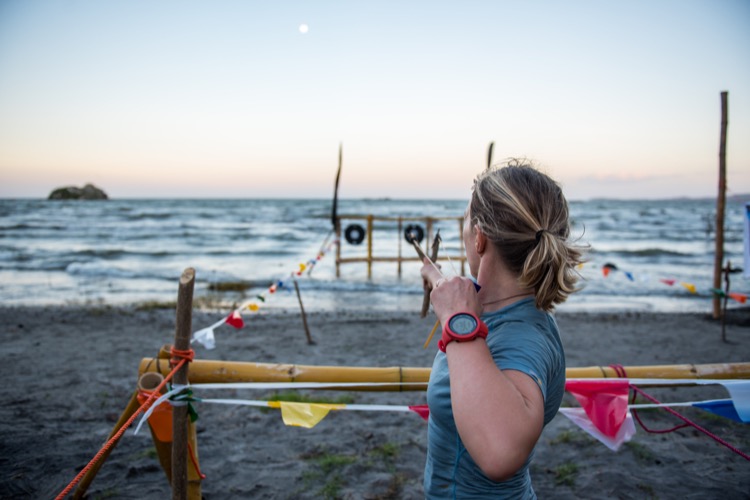 The moon begins to rise as the energy on the beach becomes electric. After having all their gear checked, and to the surprise of many, runners are told that the race would start immediately once their gear receives approval. Upon approval racers receive some materials to build slingshots as part of the challenge that must be completed to start the run. Gabs Stephens steadys her slingshot as she takes aim at a target. Photo: Tyler Tomasello 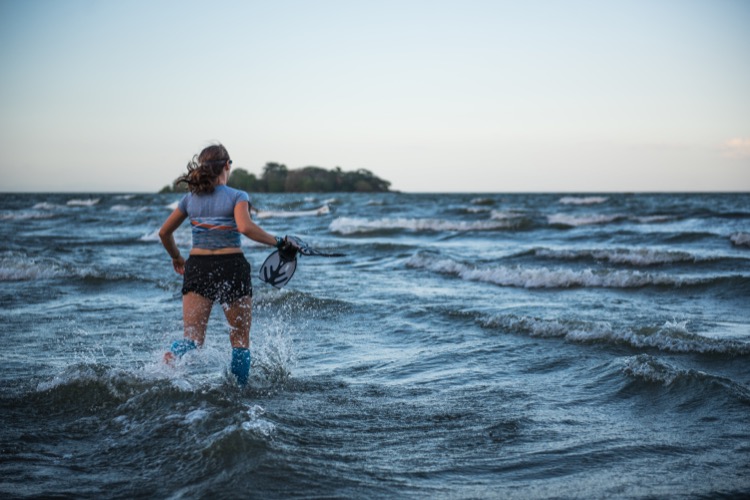 In the shallow cool waters of the lake, fueled by the changing tides, waves of uncertainty invited runners for a swim. Corinne Kohlen entered the lake for the long swim out to the small island the aptly named Bird Shit Island. At the beginning of the race, organizers announced an “extra credit” challenge. This challenge gave competitors an edge. By swimming out to the island, runners receive a wrist band which allows them to skip a challenge later in the race. The race is designed to test competitors on a multitude of different skills, challenging them to be the best versions of themselves both physically and mentally. As if running over two volcanos, climbing trees, and carrying bambo wasn’t enough, many runners find themselves running and swimming in the murky waters of Lake Nicaragua, known to be the home of bull sharks and crocodiles. Photo: Tyler Tomasello 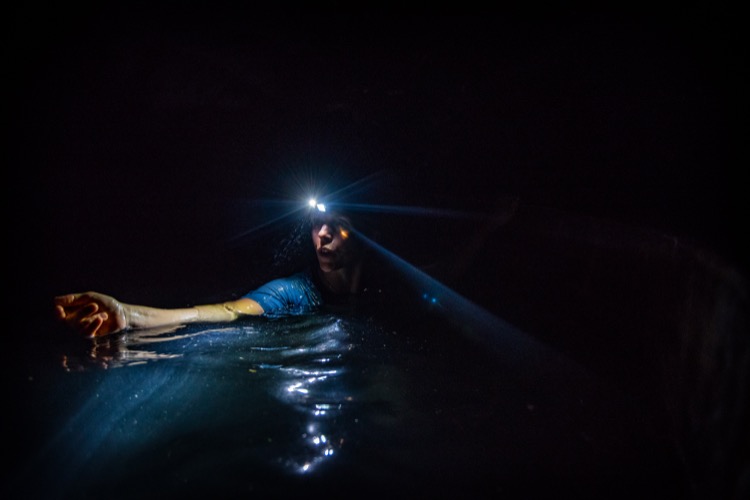 Standing on the dark beach, I watched as headlamps approached, lighting the sand as silhouettes of racers moved through the full moon light. People from all walks of life and many different physical builds ran side by side. My ears rang with an unrecognizable mixture of languages and dialects as the cultural melting pot that is Fuego y Agua Survival Run began. Four years ago, Race Director Josue Stephens dreamt up a way to blend trail running, adventure racing and obstacle racing, mixed with daily local Nicaraguan life and the hard work that many experience on a daily basis. The result…The Survival Run, a race with no clear start or finish time, and no course map. Runners must complete challenges along the way, as they tour the island and push their minds and bodies to the limit. As part of a challenge, Gabi Stephens treads water in a deep water storage tank before diving down to collect a boulder at the bottom. Photo: Tyler Tomasello 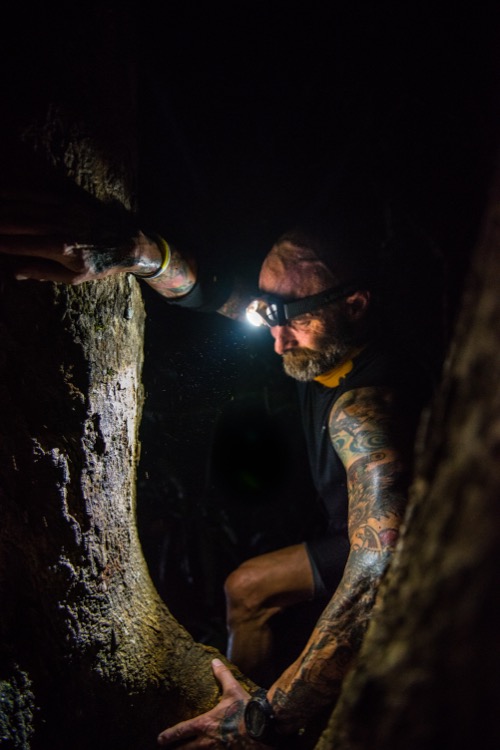 Through the thick canopy of darkness I looked down a road that lead to an illuminated forest of struggle. Lights shined down from trees as voices echoed through the night. I approached the trees and saw people above me, battered and bloody, climbing high into the trees, headlamps lighting the trees as long shadows covered the ground with patterns of leaves. Hanging in the trees were wristbands that competitors had to collect to complete the challenge. Like the monkeys that inhabit many of the trees on the island, Chief Brabon fights off fatigue and cramping as he scales into the trees to collect his wrist band. Photo: Tyler Tomasello 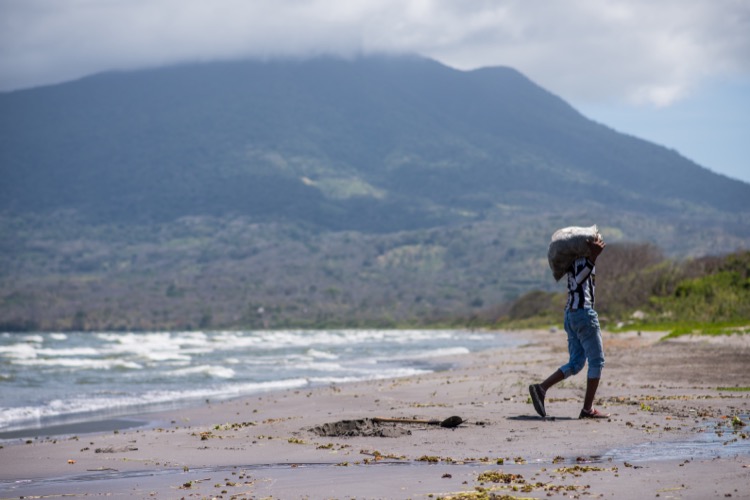 Under the shadow of Madreas on the peaceful quiet beach, not far from where the chaos of the race was taking place, a local man works under the roasting sun on the shore of Lake Nicaragua, carrying bags of sand as part of his daily life. Photo: Tyler Tomasello 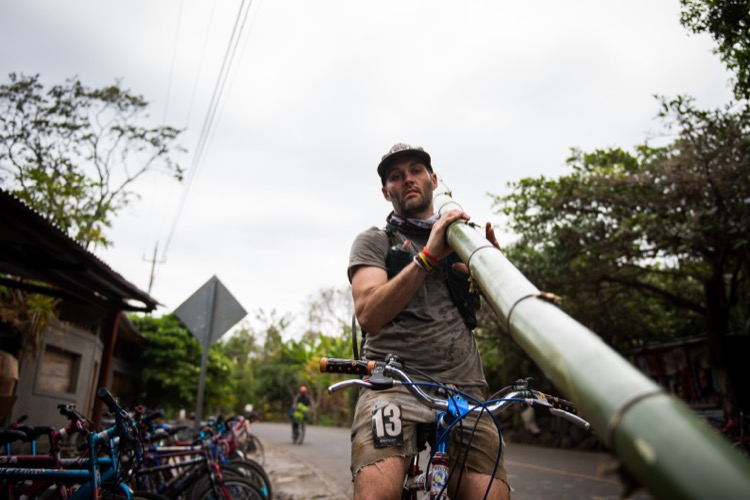 The darkness of night gives way to the light of day and with the sunrise the new day brings new challenges. Sleep deprived and covered with mud and scratches from a long night on the volcano Maderas, I found myself on the other side of the island. As I walked out of the forest, I caught a glimpse of Chris Margrave carrying a long, heavy piece of bamboo which he had just harvested from a farm, hauling it for miles until he arrived at a bike shop where his next challenge awaited. From here Chris was required to rent and ride a bike to another part of the island with the large piece of bamboo as his passenger. Photo: Tyler Tomasello 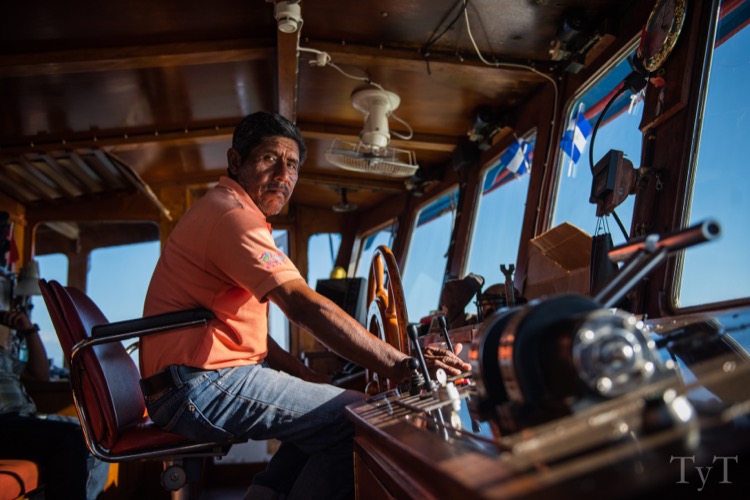 Just as the race is an extreme adventure, getting to the venue can be just as challenging. Hard-working locals work the docks loading and unloading supplies, luggage and vehicles onto ferries and take them across Lake Nicaragua to the Island of Ometepe, the surrealistic destination where the race is held. These people are the backbone of the race, and are a community we could all learn from. With pride and passion, The Captain of the ferry steers the boat through the rough, choppy waters of Lake Nicaragua delivering runners and other passengers to the island before the race. Photo: Tyler Tomasello 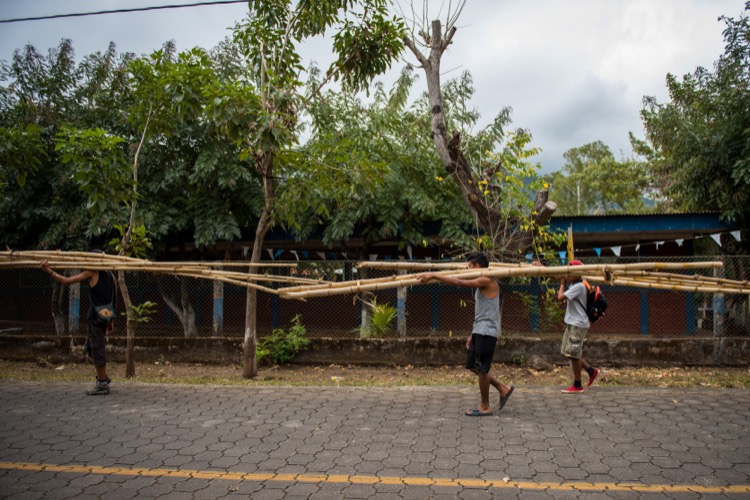 Earning respect from locals and being fully immersed in the local culture is as much part of the race as the extreme challenges are. Many locals watch on and shout words of encouragement to competitors as the lines between the race and daily life blur. Photo: Tyler Tomasello 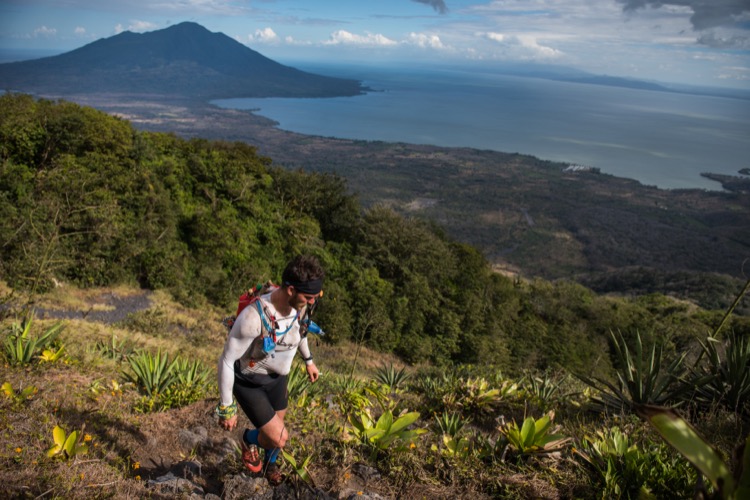 There I sat on the side of a volcano, eyelids heavy as I dosed in and out of sleep. I looked out over Lake Nicaragua as the cool breeze spun the clouds above my head while I waited for David Dietrich to arrive. The final obstacle was one of the most challenging. The only thing standing between him and the finish was a climb up and over Concepción. I heard a noise in the distance. My eyes snapped open to see David emerge from the thick green forest. Fueled by a sleepless night, I saw determination and passion in his eyes as he pushed up the final climb of the volcano, becoming the second of only two finishers of the 2017 Fuego Y Agua Survival Run. Photo: Tyler Tomasello 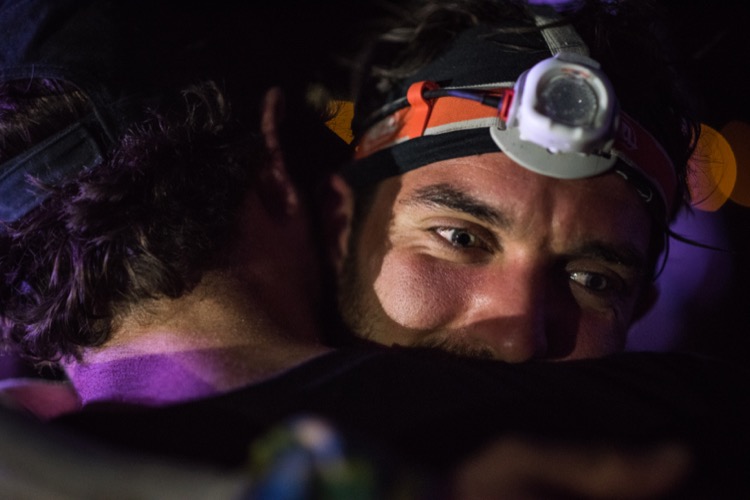 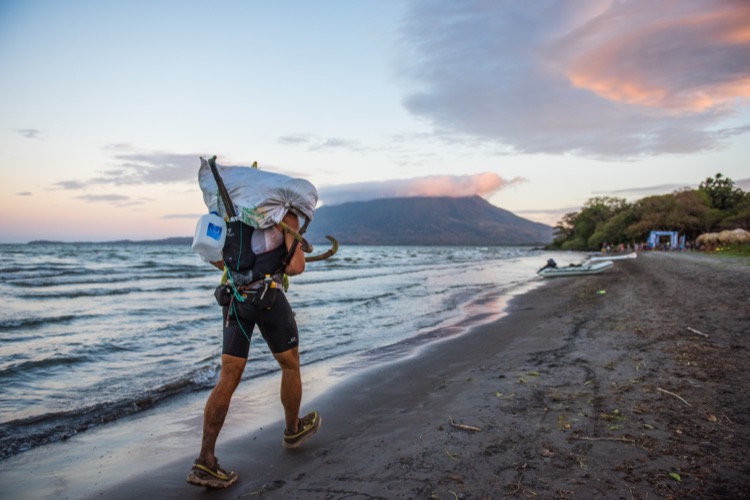 After 60 miles, running over two volcanos and many challenges later, Paul Romero runs to the finish with a heavy sack of plantains to win his second Fuego Y Agua Survival Run in 23 hours and 47 minutes. The dormant Volcano Maderas looks on from the distance while the sun retreats behind the other volcano, Concepción. The race ends much like it began, colors swirling in the sky as runners line the beach and gather around the finish with excited, nervous looks on their faces. The unknown is all they know, as hope and strength fuel their dreams. The only thing that is known about next year’s race is the location, the beautiful culture that surrounds it and that they must all…Adapt or Die… Photo: Tyler Tomasello