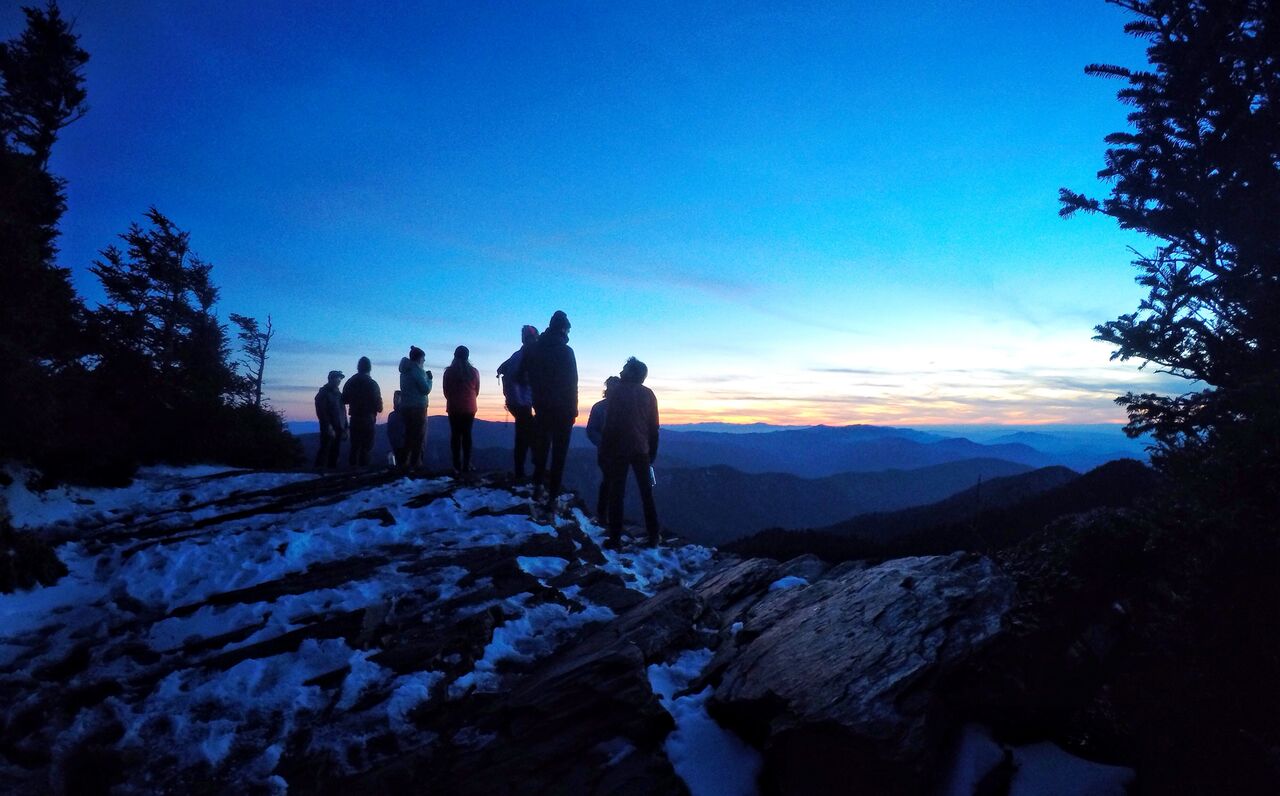 A Runner’s High on LeConte

On a Sunday morning in early March, an eclectic group of runners make their way into a small, crowded kitchen on top of Mt. LeConte. The LeConte Lodge is closed, but we’re here at the caretaker’s invitation, readying for a day of running in the Great Smoky Mountains. We drink cowboy coffee and hastily down donuts, indulging in what would normally be off-limits pre-race food. We hail from around the Midwest and East Coast. Most of us did not know each other before the night before, but two things unify us: a love of the mountains and the great fortune of knowing JP Krol.

JP is our host for the weekend. As the winter caretaker of the lodge, he lives monastically atop the mountain from roughly Thanksgiving to St. Patrick’s Day. Duties are spare, consisting mostly of a morning weather observation, a daily update on the High On LeConte blog and generally keeping an eye on the cabins in the offseason.

Months of relative isolation are not for everyone, but the lifestyle suits JP well. A philosophy and religious studies graduate of Indiana University (where I first connected with JP), he reads a lot of Emerson and Thoreau, Kerouac and Camus. His small cabin loft is lined with books, topographic maps and the odd magazine clipping of a running hero.

Until an eighth-place finish at this year’s Mountain Mist 50K, JP had never competed in an organized ultramarathon, but he has completed many feats of ultra endurance. He’s an Appalachian Trail (AT) through-hiker and veteran trail crew worker. This summer, along with his friend and 10-time Hardrock 100 finisher Billy Simpson, JP will tackle three canonical multi-day trails in immediate succession: the Vermont Long Trail, the Colorado Trail and California’s John Muir Trail. They are calling it the “Triple Gem,” a nod to the Triple Crown achievement of hiking the AT, Continental Divide Trail (CDT) and Pacific Crest Trail (PCT).

In 2014, JP decided to host an approximately 30-mile race from his winter home on the mountain, and the Mt. LeConte Fun Run was born. This year’s edition was the third annual and the first I was able to attend. It’s less a race and more a communal celebration of being alive and able to cover beautiful mountainous terrain under your own power.

In an age of increasing money and controversy on the trails, it’s wonderful to spend a big day with likeminded strangers, not worrying about high registration costs, doping or ego. I don’t think there were any worries at all. Only the joy and woe of honest effort.

At 9 a.m., after a brief review of the trail route – down Bullhead, up Trillium Gap to the lodge (the only “aid station”), down Bullhead again, up Rainbow Falls – we embark down the mountain. We’re blessed with a bright, bluebird morning. Temperatures are mild, but we still tread on snow for the first half of our 6.5-mile, 4,500-foot descent.

A few groups naturally form as we make our way to the valley floor. I linger at the back of the final pack, taking pictures and enjoying conversation, only to charge hard up the climb on Trillium Gap Trail to catch JP and Seth Orme in front. It will be only the three of us who go the full 30-mile distance today, everyone else settling for the 17-mile loop (albeit with 4,500 feet of gain).

No one has been on Trillium yet today, and we run on virgin snow past Grotto Falls and the Ice Wall. Gaining the lodge in just over three hours, we stop for snacks. Ten minutes later, we are back on Bullhead Trail for a sloppier, tougher descent due to the morning’s snow melt.

Once we are back in the valley, I decide to push the final return climb to the lodge, just over 6 miles away with another 4,500 feet of gain. The lower two miles on the Rainbow Falls Trail are crowded with day hikers, a marked contrast on the day. But above the falls, I’m back in my own world, passing only a few hikers on the final grunt to the top. I’m near my limit on the final 1.5 miles of slush and rock, exhausted when I stumble back into the lodge a bit after 3 p.m.

In the kitchen I’m immediately handed a beer (a growler was the price of admission for the run) and a bowl of dumpling soup. Perfection. JP and Seth arrive to the same reception. As evening draws near, we commune on the Cliff Tops overlook for a brilliant sunset before making an epic batch of mac and cheese. We quaff ales, recounting the day and enjoying each other’s stories.

Almost everyone has an interesting tale to tell. Seth, for instance, recently founded an environmental stewardship organization called Packing It Out. Its tagline is “Whether we have five minutes or five months, let’s keep our trails clean.” Seth lives the latter time frame; he hiked the AT last year while raising awareness and packing out 1,090.5 pounds of trash. This year he will do the same on the PCT.

Others have similar passion for the outdoors, healthy trail systems and land conservation. These are people who care deeply for the wilderness and understand that life is for living. Perhaps an Emerson quote that JP shared on a recent High On LeConte blog post best characterizes the group:

“The one thing of value in the universe is the active soul.”