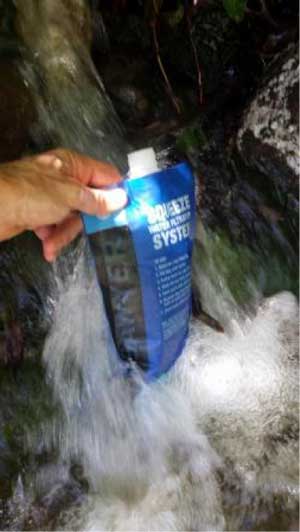 Filtering water from a stream in the Shawangunks

A Manifesto for Minimalist Races

As we all know, the best trail races are well-marked and have great aid stations.

So why would anyone offer a race with neither?

Last year, my friend Todd Jennings and I organized a race to celebrate the Shawangunk Ridge Trail (SRT), a magical footpath that traverses the entire 74-mile length of the Shawangunk Mountains in New York’s Hudson Valley. For those not familiar, the trail starts at High Point State Park in New Jersey at a junction with the Appalachian Trail, follows the western edge of the Great Appalachian Valley, passes rare pitch pine barrens and glacier-polished cliffs and talus fields, and ends just beyond a restored railway trestle high above the town of Rosendale, New York.

I had discovered the SRT by thru-running it, and the idea was – rightly or wrongly – to provide a format where other runners could experience the same feeling of adventure, following a winding trail through the wilderness, unassisted.

That meant no aid stations and no supplemental course markings.

Frankly, I was happy to do away with aid stations. I don’t feel good providing people with highly processed sugary foods. This stuff is increasingly linked with obesity, diabetes, heart disease, and dementia. But that doesn’t mean the kind of food I personally favor is the right answer for others or that I would be able to provide something for everyone.

There’s an easy solution: Let each runner take responsibility for managing his or her nutrition. After all, that’s what people do when they head out on the trails on their own.

I don’t have a problem providing water. But why would people who love nature want their water collected in plastic bottles? Here’s a lower-impact idea: Let runners bring water filters. After all, the SRT passes streams, ponds, rivers, lakes, and the incredible Bashakill, which is southern New York’s largest wetlands. This isn’t Death Valley.

Filtering water from a stream in the Shawangunks

Just because we don’t have aid stations for the SRT, doesn’t mean we have a casual attitude towards safety. To the contrary, we have checkpoints to ensure accountability of all participants, and we work with highly-trained search & rescue teams should it be necessary to extract someone from the course. As race director for SRT, I wasn’t hanging out at the finish line; rather, I was out on the course for 36 hours straight just to make sure everyone was OK.

What about course markings?

The SRT is blazed with paint splashes and plastic disks from start to finish. I verified this by thru-running the course two times, taking detailed notes along the way, and then working with volunteers from the New York-New Jersey Trail Conference to clean up certain sections of the trail that were difficult to follow.

Even so, running along a blazed hiking trail is surprisingly difficult. We runners tend to look down, so we don’t trip. That makes it easy to miss a blaze at a key intersection and head off in the wrong direction. Trust me, I’ve done it plenty of times.

Typical paint and disk blazes on the SRT

To help runners stay on course, we provided paper maps and a free smartphone app which shows where you are relative to the SRT at the push of a button.

The goal of the SRT event is not to lure unsuspecting participants into an orienteering challenge or a bushwhacking adventure for which they are not prepared. After all, if someone gets lost, the race director bears the responsibility for finding them. That’s no fun – especially after dark.

What’s required of participants is that they pay attention.  Call it being “mindful.”  And, yes, it’s an added mental challenge on top of the physical.

But we feel good asking runners to step up to this extra challenge, because being mindful is a critical component of moving through the wilderness safely. So why not practice it in races?

Another reason not to like supplemental markings: those times when volunteers put up the markings in the wrong spots, course marshals steer people in the wrong direction, or vandals take down the markings and put them up heading the wrong way.

In the future, racing might be an altogether different experience. Maybe there won’t be blazes or markings. Maybe you’ll just see turn signals flashing on your Apple Watch or in your Google Glasses. That’s OK. However technology may evolve, the principles of Minimalist Racing should remain the same:

(If you’re interested in minimalist racing in New York’s Hudson Valley, check out the SRT Run/Hike at www.srtrunhike.com or the Ellenville Mountain Running Festival at www.facebook.com/EllenvilleMountainRunningFestival)

Nice. So, since unassisted mindful running is mostly what we do when we are not “racing”, why not when we are… especially on an already marked trail? This seems a wonderful alternative to the typical “aided” race.

PS: T-Rex (a TX running group) conducts similarly unassisted short trail races (up to 1/2 marathon). With no significant costs, these races (every last mile) are all FREE…

Not sure who gets off charging runners and providing them nothing but a t-shirt.

I am so excited for this 74-miler race, you have no idea! . . . being that there was only 1 finisher in 2014 and only 5 men who entered I don’t think the director is making rich off the entry fee as noted in “your mom” comment below. . . .that being said I look for nothing more amazing than a minimalist ultra for all the reasons written above. This is truly what it is all about. . . and add in night time running to boot. LOVE IT!

Why would someone cough-up more than 150 dollars for a race that doesn’t provide you any food or water on the trail? How funny is to defend by saying that sugary things cause obesity and diabetes. While they do cause obesity, but not in the athletes who are used to long distance running. Not, even water because that will need to man the stations and spend some dollars on water. Pretty interesting!!!