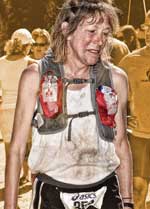 With new “championship” races popping up and new race series on the scene, what are your thoughts about prize money in ultrarunning? Is it a good thing? Should it increase?

The growth of the prize money and “championship” races is definitely a hot topic in the beloved ultrarunning community. It is my belief it is just too early to tell how this will affect the sport. The reality is that this is a natural progression as the sport becomes more mainstream and popular. Hand in hand with prize money come such difficult ethical questions as the use of banned performance-enhancing substances, and gender equality, to name just two. As a race director I am also concerned that championship races may cause some the current local and regional races to lose their draw and fade away into distance memory.

I could be wrong here but at the present it seems like a bit like the Wild West. The sad truth is that some sort of monitoring of doping should be addressed. Out of competition and in competition drug testing may have to be a part of the new landscape. It was not that long ago (okay, maybe it was in the last decade) that a woman I was competing against tested positive for a banned substance and got a two-year suspension. Comrades Marathon has tested the top athletes for years. Does the sport of ultrarunning want to be under USATF drug testing guidelines? I think so. Do you? This is the time to delve into this topic and not sweep it under a rock.

Gender equality should be mandatory. From the number of spots in a given race, to travel assistance, from time incentives, to prize purses, all should be equal for both the men’s and women’s fields. Hard to monitor, I agree, but gender issues should be transparent so that folks can determine the philosophy of given races.

Ellie Greenwood, in her September 18, 2012 iRunFar column titled “The Politics of Prize Money” addressed just this issue. Ellie elegantly brought up how the Indiana 100 had caused “quite a stir” when they first announced a $25,000 incentive for breaking the “overall” current North American-soil 100-mile record of 12:44:33, set by Ian Sharman at Rocky Raccoon in 2011. Hard to imagine, but it is possible but not likely that a woman would have a chance of breaking Ian’s time. The Race Director later added an incentive for a new women’s record as well, to the female athlete who could break the 100-mile record set by Jenn Shelton, 14:57:18. Thank you, Ellie, as this is a fine example of how a bit of vocal concern can have a very positive impact.

For the majority of ultrarunners, prize money and championships are not their major concern.

At the end of the day, Alan, change is a good thing. New races, new championships, financial incentives to the elite crowd, can be an excellent development if it does not sacrifice the integrity of the sport. I am a firm believer that not all events have to have a huge amount of swag and pomp and circumstance. Local and regional races and “old school events” will continue to have their niche in the ever-changing world of ultramarathoning.

You never know. The new breed may even enjoy a well-managed event that gives out a cotton shirt, a pat on the back, and some good home-cooked food at the end.

Have a question you would like to ask Ann? email her!

All I can say is “doping”. Love of money, overtakes love of the sport, cheating follows. Football, Baseball, Triathlon,Track and Field, Soccer, Cycling, all have been corrupted. Ultra Running is the perfect candidate to corrupt by PED’s. Pro Racers have every right to make a living, but you invite bigger money and you invite bigger cheaters.