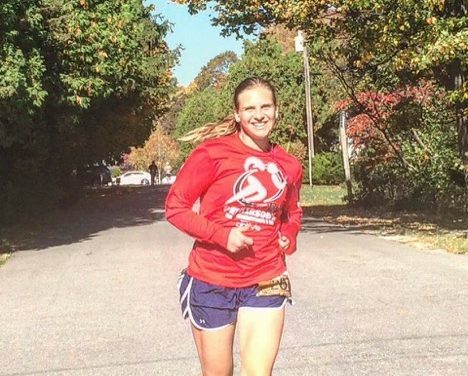 When I found out I was pregnant last September, one of the first things that ran through my mind (after the initial shock of course) was, “I hope I don’t have to drop out of the Door County Fall 50 I registered for months ago.” I quickly did the math and discovered I would be 11 weeks pregnant on the day of the race. Is running 50 miles while growing a tiny human smart or even feasible? This being my first pregnancy, I had no idea how I would be feeling at that, or any stage. After doing some Google research I discovered that yes, it likely would be possible and I should just see how I feel during training. No big expectations here.

As I counted down the weeks to the big race and continued to train, I encountered a problem. I began experiencing unexplainable bleeding, especially during and after running. Terrified I was miscarrying, I would have to stop the run short and walk home, mortified. I alerted my doctor to the strange bleeding and she ordered blood tests. The tests came back fine – my numbers were right on target. I didn’t realize then that the problem wasn’t running, but something much more sinister growing inside of my body.

At my 8-week ultrasound, my heart sank as the technician told me there was no baby. At this time I made the decision: I am running the race. I have no excuse not to do it. But things didn’t get better, they got worse. I began feeling sicker and sicker by the day until I could hardly eat, sleep or work, let alone train. I called the doctor and she ordered another ultrasound. This time the technician’s face said it all: something was very wrong. The doctor put a name to my nightmare: complete molar pregnancy. Most of you have probably never heard of a molar pregnancy unless someone close to you has experienced one.

Happening about every 1 in 1,000 pregnancies, it is when a sperm fertilizes an egg with no DNA, and instead of the pregnancy self-terminating, the cells begin to divide aimlessly, without a map. The tumor-like mass of cells inside the woman’s uterus causes her body to release the same pregnancy hormones, meaning she will have a positive pregnancy test and all the tell-tale pregnancy symptoms, though no fetus will develop. A molar pregnancy requires surgery to be removed, and the cells have a tendency to grow back, meaning about 20% of women diagnosed with a molar pregnancy will require chemotherapy to beat the disease. About 2% of the time choriocarcinoma – a highly treatable form of cancer – will develop. Knowing all this I went into surgery a mere three days before the race.

The day before the race I picked up my race packet, not knowing if I was going to try to run the race or not. On the plus side I was feeling better than I had in weeks, the nausea finally subsiding, but understandably I hadn’t received my doctor’s blessing to attempt to run 50 miles so soon after surgery. The day of the race I figured I would just start running, see how far I got, and no hard feelings if I needed to drop out at mile 15. Mile 15 came and went. At mile 20 I passed my husband and didn’t see him until he crossed the finish line 30 minutes after I did (to be fair, he didn’t have much of a training season either without his running buddy).

Feeling like I had finally freed myself from the prison of my own body, I pushed myself to finish all 50 miles. Mentally broken, I achieved more than I ever thought possible. I had hardly trained all season and added 45 minutes to my time from the previous year, but I wasn’t bothered by this. Ultrarunning for me is about testing your mental and physical limits, and the situation I experienced taught me that sometimes it takes a great loss to reach an all-time high.

Thank you, brave woman, for sharing such a deep and personal story. You are an inspiration to so many.

You are my hero, dear niece.

First time I read this Claire (from your mother). Wow I had no idea about how icy that bad experience and , how much running that race meant to you. I love you and am very proud and thankful for you, my ClaireBear
Love
Julie stein

Reading this gives me hope!!
from the bottom of my heart I wish you all the luck in the world in your next pregnancy 🙂

I am so impressed with how well you handled a very difficult and painful situation. You were able to turn a negative into a positive through sheer determination. I’m so proud of you and love you so much.