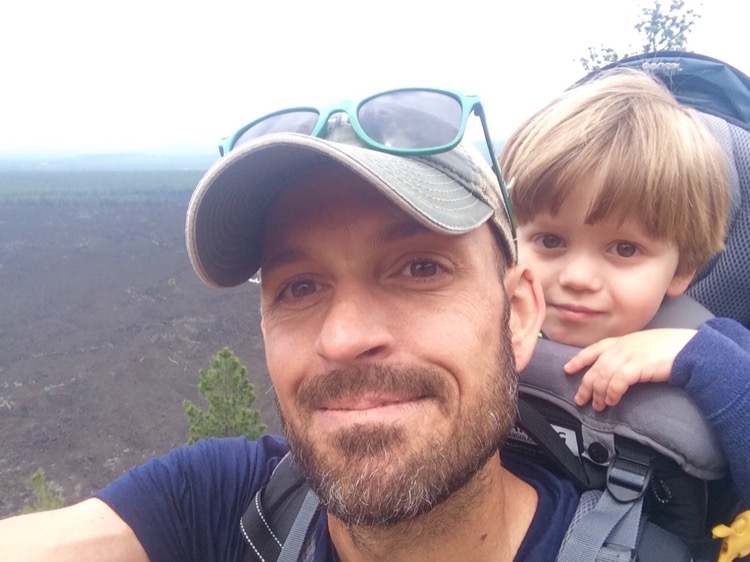 Drew Dinan on an adventure with his son, Dean. Photo courtesy Drew Dinan.

Last week I watched a garter snake mosey across a trail in what I can only assume was some sort of slowest known time (SKT) attempt. Normally, I would have shuffled around the snake and continued down the path without pause. I don’t have time for rude reptiles (especially non-venomous ones) disrupting my blistering run paces. I have nearly 200 Strava followers. What would they think if my 8:45 mile turned into a 9:15 because I stopped to admire a legless lizard for 30 seconds? Surely I would lose a few.

But today was different. I had my three-year-old with me and he’d never seen a snake in the wild before. He was enthralled. So we laid out our blanket, got out our cowbells, and cheered on the scaly serpent as it continued on its record-setting quest. Eventually, after a few long but apparently necessary breaks, the snake made it to the other side of the trail and we resumed our father-son adventure.

I had planned to run that evening when I got home but our hike plus snake crewing had taken much longer than I had anticipated. I still had hours left in the day to run, I will admit, but Jason Isbell and Amanda Shires were live-streaming an acoustic show that evening. My wife and I had big plans to drink margaritas, listen to some tunes, and sit on the same couch we’ve been sitting on every night for the past two months.

Before the pandemic, I would have gotten my run in and watched a replay of the concert at a later time. I would have been preparing for my dream race, the Olympus Mythical Trail 100K in Greece—my 40th birthday gift to myself—and I would have been committed to my training. But I won’t be headed to Greece, and with no race to train for, I have no problem substituting miles for ballads and laughs with my wife.

My family has and always will come before running. It’s just that my training has changed from what I probably should be doing, to what I want to be doing. I’ve learned during the pandemic that I don’t really enjoy long runs. That may sound strange coming from an ultrarunner writing a piece on ultrarunning, but it’s the truth. I’ve realized that most of the long runs I do are simply to prepare for races—not because I want to spend long hours out on the trails.

I’ve also discovered that what I do love are the races, and the process of getting ready for them. I like pushing myself to be as prepared as I can be on race day. I view races as the ultimate reward for my hard work. And the best part of that reward is the people. I cherish interacting with volunteers, sharing miles and making new friends with like-minded strangers, and then celebrating our accomplishments at the finish line while cheering on other runners.

I see many of my friends on Strava doing epic long runs each weekend, and I’ll admit that I’m a little jealous. I can see how much they love doing five- and six-hour running adventures. I’m stoked for them. But right now that isn’t me. I’m doing shorter runs around my neighborhood and even speed workouts at the track. I’m a long way away from being in ultramarathon endurance shape. But that’s okay because I’m enjoying what I’m doing, and you should be too. In these crazy times it’s important to just do you—whether it’s running 5ks on the roads or 50-milers in the mountains.

That same night as I was getting my son ready for bed, he could not stop buzzing about the snake. I’m blessed to have had the opportunity to share that experience with him. And I’ll get back into training for ultramarathons soon—I love racing. On top of that, my friends have some big plans for later this summer and I want to be able to join them without suffering the entire time. But right now, I think I’ll just keep doing what I’m doing. And perhaps go and try to find some more snakes.

Love this. I feel you. I find myself wavering between FOMO as I watch my friends spend entire days in the mountains and feeling okay spending this time with my three children, building forts out of boxes, riding bikes in the neighborhood and baking. I am squeezing in my miles as I can. Just doing me.

Hi Kat, thanks for the comment. Now is the perfect time to enjoy all those things like building fort boxes, riding bikes and baking. I can hear my son in the other room right now asking my wife to build a volcano. Not entirely sure what that’s going to entail but this seems like a good time for me to sneak out for a run, haha! Enjoy doing you and Stay safe! -Drew

Glad to see the Jason Isbell reference, totally worth an evening on the couch.

Good picture of you and baby. Great memory for you and Dean.