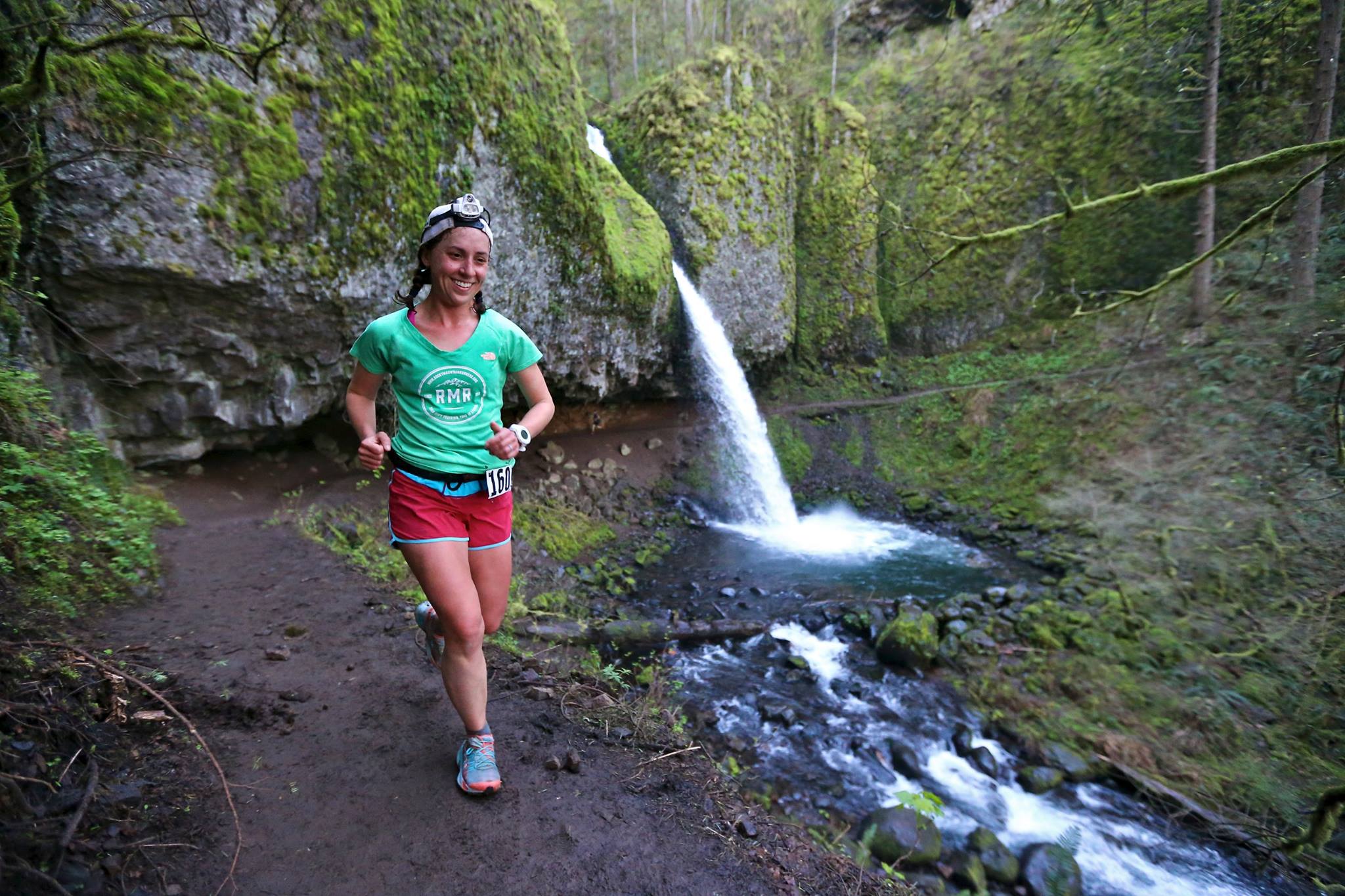 A runner passes one of the many falls along the Gorge 100K course. Photo: Rainshadow Running

Yes, The Gorge Does Have Teeth

Winter pounded the Pacific Northwest this year, with 70-year records being shattered for rainfall at the Portland International Airport. Buckets of precipitation also caused landslides throughout the state, including the Columbia River Gorge. Higher elevations saw snow accumulate by the foot, while wind ravaged forests, knocking over susceptible trees and then some. After missing last year’s Gorge Waterfalls 100K due to injury, I wasn’t about to let a little weather stand in my way this time. But in the back of my head, a phrase I’d heard over social media continued to echo over and over, “The Gorge has teeth.”

Located along Oregon’s northern border, the Columbia River Gorge stretches for over 80 miles, cutting a wide river canyon through the Cascade Mountain Range between Oregon and Washington. What’s left are steep cliffs, over 90 dramatic waterfalls, and rugged trails that wind through a rainforest-like climate. Lured in by true Pacific Northwest scenery, Rainshadow Running started the Gorge Waterfalls 50K in 2011, giving ultrarunners the opportunity to run alongside the majestic waterfalls. The 100K distance was added three years later by doubling the 50K into an out-and-back course.

With weather being the big question in the back of every runner’s mind, the entire state experienced extreme winds just a day prior to the race, topping 80 mph at nearby Mt. Hood. Race organizers assured us that the course had been prepped for race day, but I began to wonder if there would be many “last minute” log jams. At this point, there wasn’t time left to worry, the start was mere hours away.

At 6am, we set off straight up the side of Multnomah Falls, zigzagging our way to the top and climbing to just over 1,500 feet in approximately 2.5 miles. On our way down, we were warned to carefully descend a snow bank that had been notched into stairs situated directly above a raging Multnomah Creek. With around 60 miles still to go, it had already started to get interesting.  But we continued, hurdling (or crawling under) log after log.

There have been years when the trails are dry and wild flowers are in full bloom. The waterfalls don’t gush but rather pour into the pools below. The trails take a little less of a beating during winter months, which means trees haven’t fallen or have already been cleared by trail crews. The sun is usually out, and the threat of rain or wind is non-existent.

But this year was much different. High water meant frequent creek crossings, and course re-routing due to landslides. I began to notice the trees were just starting to bud, and the bright green moss was waking up to warmer temperatures. Spring was late this year. It was about this time when Jim Walmsley passed me going the opposite direction. And then no one. For at least an hour.  After my hard earned 18 miles, he was already at mile 44 and on his way to earning a golden ticket along with the course record.

Passing runners on their way back is an added perk of this race – almost every single runner gave enthusiastic encouragement when crossing paths with one another. At one point while traversing a snow bank embedded with a single set of footprints, a runner heading towards me saw my look of worry as he started across and said, “You go low and I’ll go high.” Teamwork during an ultra is the best.

But once the camaraderie had passed, the weight of the distance sunk in along with the darkness of the setting sun. Along the stretch between aid stations at mile 40 and 49, I convinced myself that it wouldn’t be smart to continue even if I did make the next cutoff. I could barely run because of a bad stomach, and sprinting across a field of wet boulders wasn’t easy to manage on sore legs, but it was even harder at dusk. My desperation to reach the next aid station was in large part due to my need for a headlamp.

I soon began to anticipate a portion of paved trail that we had traversed on our way out because it also happened to be the final stretch to the next aid station. But as I followed signs while turning onto a dirt trail heading uphill, I knew it was the wrong way.  Then suddenly, at a viewpoint directly across from Elowah Falls I panicked because I knew the trail below had been closed due to a landslide.

Making my way down with no other direction to turn, I headed across the bridge and looked up to see Race Director, James Varner. Just like that, my fear subsided. He informed me that they did in fact change the course so runners could see the falls, and due to a landslide we’d be climbing a rope up a mud embankment. And soon after, my race came to an end.  Missing the time cutoff at mile 49 meant I wouldn’t be allowed to continue to the finish line.

Gorge Waterfalls was my first 100K attempt as well as my first DNF. It was a brutal realization that the Gorge in fact does have teeth, but the mangled logs, raging water, mud slides, snow banks and seductive trails tucked high above the Columbia River made for an amazing adventure that’s not often found in any formal race. I may have been a little beaten up but I’ll be back next year, and ready for anything.

Kudos for taking it on. Sounds like an unforgettable experience.

Thanks Roy, it was!

Way to go, Amy! I was there that weekend and ran the 50k on Sunday. That steep, rocky terrain around Multnomah was NO JOKE and I’m glad we didn’t have to descend that snow bank you mentioned. Awesome race, though!

Thanks Lauren and congrats on running the 50K! It’s a rough course for sure – and this year was EXTRA tough.

Great job, Amy! I’ve run the 50k here, and it was TOUGH! The 100k would be a beast to take on in good weather. Congrats on your journey! It’s always about the journey!

Thanks Jane! I agree – it’s all about the journey.